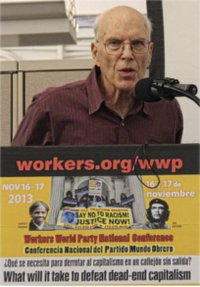 From a WWP Conference talk by Secretariat member Fred Goldstein.

There are still close to 12 million officially unemployed, 8 million workers forced to work part time and millions who have dropped out of the workforce — perhaps 25 to 30 million workers unemployed or underemployed in the U.S. alone. The youth are hit the hardest, and Black and Latina/o youth suffer the most. This despite the Federal Reserve pumping $85 billion a month into the economy.

The bosses and bankers are more and more resorting to speculative paper profits and looting public institutions, the way bankers are looting Detroit. But speculation and looting don’t create jobs; they destroy them. That is no way out of the crisis.

Food stamps are being slashed. Hunger is on the rise. These cutbacks are hitting more than 4 million people, most of whom have jobs but still live in poverty.

The health care crisis of millions is being aggravated by the near collapse of the Affordable Care Act website. And the crisis is pushing capitalist politics to the right.

Racist violence and repression persist, as illustrated by the cold-blooded murder of 19-year-old Renisha Marie McBride in Dearborn, Mich., by a trigger-happy racist. Attacks on women’s rights and lesbian-gay-bi-trans-queer people have escalated. Deportations of the undocumented have not slowed down, and the drive for further militarization of the border goes on. Militarism and the devastation of the environment continue unabated.

In Europe there is record unemployment. In Africa, the Middle East, Latin America and the Caribbean, unemployment and poverty rates are much higher than in the big capitalist countries.

Indeed, capitalism is still at a dead end. And it may soon be time for Workers World Party to think about marches to demand jobs and food.

I would like to touch on the historic question confronting the party, the radical movement and, above all, the union movement: organizing the working class for the struggle against the bosses and ultimately against capitalism. I want to put into historical perspective the low-wage workers’ movement and its significance as a harbinger of future struggles.

Karl Marx in the Communist Manifesto pointed out that the greatest accomplishments of the capitalist class were the development of gigantic productive forces and the creation of the working class. These two developments went hand in hand.

The capitalist class concentrated the workers into great capitalist enterprises, bringing them out of rural isolation and putting them together, where they could organize against the very bosses who brought them there to exploit them and extract unpaid labor, or surplus value.

Over the history of capitalism the character and organization of the working class changed as the development of the productive forces progressed, from the early period of craft associations — like tailors, shoemakers, weavers, wheelwrights — to the larger craft unions of the industrial era — pipefitters, engineers — to the semi-skilled industrial unions of the era of mass production and assembly lines.

And in recent decades the capitalist class has created a vast service proletariat in the U.S. and other big capitalist countries.

The U.S. agricultural population, who were the majority in the mid-19th century, was rapidly concentrated into cities, into factories and mines and mills, in the era of industrialization. Out of this grew the class struggle to create first craft unions and later, in the 1930s, industrial unions.

But just as in the previous era the capitalist class created the industrial working class, in the era of globalization and the scientific-technological revolution, big capital has created the vast, low-wage service proletariat, which is now numerically preponderant.

By pouring money and technology into commercial capital, transportation, finance and trade, the bankers and bosses have drawn millions of workers who were previously isolated in small businesses into low-wage, high-profit retail chains and healthcare services, education and transportation.

Tens of millions who once worked in tiny shops, local stores selling stationery, lumber, hardware, groceries, clothing, appliances, books, as well as pharmacies, restaurants and diners, etc., were invisible, without an identity, so to speak. They were completely isolated from other workers and subject to the whims of a small business owner.

What capitalism has done in the last 30 years is to concentrate these occupations into vast chains like Walmart, McDonald’s, Home Depot, Staples, CVS, Old Navy, Bed Bath & Beyond, Target, P.C. Richards, Barnes & Noble, Starbucks, and so on. Many have been placed side by side in great shopping malls and transportation hubs. The workers in these chains have a common employer, a common identity and a common knowledge of each other’s misery and exploitation. A McDonald’s worker in the Bronx can identify with and talk to a McDonald’s worker in East Los Angeles.

In a word, the new high-tech, globalized phase of capitalism has brought these workers out of obscurity into the network of the socialized labor force. The situation cries out for organization.

A myth that has circulated for years is beginning to be eroded by the low-wage workers’ actions. It says that the workers in these chains cannot be organized. They are too spread out. There is too much turnover. The owners have deep pockets and can crush any attempt to organize, etc.

Fortunately, the new radical movement, both outside and inside the labor movement, including but not limited to Occupy Wall Street, has begun to look back in labor history to try to find precedents that will help guide them.

One example, which I wrote about five years ago in “Low-Wage Capitalism,” is the great Woolworth’s sit-down strike of 1937, which led to organizing the chain. A paper, put out by forces from OWS, has instructive formulations:

“In 1937 [Woolworth’s] had an empire of over 2,000 stores in the USA and Canada plus more in Cuba, the UK and Germany. … It was the WalMart of its day. It had ruthlessly put small mom and pop stores out of business. … Founder Frank Woolworth was an expert at finding cheap sweatshop and child labor in Europe.

“150 women workers stopped work, folded their arms, sat down and the strike began.”

In “Low-Wage Capitalism” you can read how the strike spread throughout the Woolworth chain, then to other department stores, to the East Coast and the Midwest.

Quoting further from the OWS paper:

“Generations of corporate propaganda have imbued us with the idea that the workplace is strictly private property; a holy ground upon which we tread only at the sufferance of its owners. … Freedom of speech, freedom of assembly and the right to petition grievances melt away within its sacred environs.”

The document concludes that to organize workers will mean “challenging what Wall Street considers the private spaces of capitalism, the very lion’s den of global corporations. … This will be the Occupy Movement’s greatest challenge.”

I want to point out two significant things about this piece. The example of the Woolworth’s strike shows convincingly that low-wage retail workers can be organized. And it shows that strikes and protests by the low-wage workers’ movement today are a harbinger of bigger struggles to come.

To be sure, the industrial proletariat is also becoming more and more low-wage, and is still significant and highly strategic. But the low-wage service workers are now the preponderant section of the working class.

Woolworth’s was spread out across the country. The owners were among the richest corporate families in the world. The major difference between then and now is that the workers were on fire in that period and the labor movement was supportive of the strike and the organizing drive.

There are no structural barriers today to organizing the low-wage workers. The main barrier is fear among the workers in the midst of the economic crisis. But that may be diminishing. The other main obstacle is the timidity of the labor leadership in the face of this historic challenge.

Some of the survivors of OWS and other radicals have evolved away from a general focus on broad income inequality to a focus on the plight of low-wage workers and their anti-capitalist mood is growing. To be sure, they are far from Marxism as we understand it. But a revolutionary party can ignore this at its peril — especially the anti-capitalist mood.

The activists are influencing the workers in a left direction, and both the workers and the radicals will influence the labor movement. The urge of the workers to resist their terrible exploitation will drive this process forward and eventually lead to some form of break — as it did in the 1930s, when the workers forced the labor leadership to help them organize.

It would be interesting to hand out thousands of applications or petitions to the workers demanding that unions come and organize them. This is what happened in the 1930s. The workers forced the labor leadership to organize them.

I want to end on a theoretical note. The development of the productive forces which led to the creation of the service proletariat, the decimation of the industrial workers, and the rise of the giant chains and big box stores has brought capitalism to a dead end.

The gigantic increase in the productivity of labor due to automation — especially robots and software, as well as computerized inventory systems and the management of global production chains — is the very same force that constitutes the material foundation for socialism.

Under capitalism automation creates misery, speedup and unemployment. Under socialism automation will lift the burden of labor and create abundance. Wealth will be measured by the amount of leisure time workers have for their personal development as human beings.

Capitalism has created the material and organizational foundation for socialism. What remains is to take that foundation away from the capitalist class by the revolutionary destruction of the profit system, to create a new social system upon the already existing material foundation created by capitalism — but free of exploitation and directed toward the fulfillment of human need. Namely, socialism.

Down with capitalism! Fight for socialism! Build the multinational proletarian party!