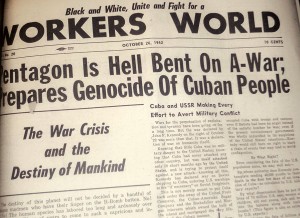 Earth-shaking crises can bring about life-changing decisions. The 1962 October Missile Crisis did for me.

In the fall of 1962, I helped about 15 to 20 people in Youth Against War & Fascism, all about 17 to 25 years old, build a demonstration on Oct. 20 in Times Square in New York City. It was my first such experience with YAWF, which was the youth organization of Workers World Party.

I was impressed with the seriousness of the people involved. Every chant and slogan expressed clear anti-imperialist, anti-racist, pro-working class politics. They were printed clearly, too, with magic marker on cardboard.

In the Oct. 26, 1962, issue of Workers World newspaper, an article reported that 150 people demonstrated “against the U.S. war drive. … [T]he pickets chanted ‘Stop the War in Vietnam — Bring the Troops Home!’ and ‘No Invasion of Cuba.’ Typical of the many colorful signs were ‘No Nuclear War Over Berlin’ and ‘End Racism, Not the Human Race!’”

The action was good and shut down the military recruitment center. But some serious youths and one good demonstration still were not enough. It still seemed far-fetched to me that a couple dozen young people would overthrow U.S. capitalism, with its 3-million-strong military, its nuclear weapons, its cops and its media monopoly.

It was the imperialist U.S. ruling class itself, the Joint Chiefs of Staff and the John F. Kennedy administration that supplied what was needed, just two days after the YAWF demonstration.

On the evening of Monday, Oct. 22, 1962, Kennedy informed the country that the U.S. was on the brink of a nuclear war with the Soviet Union. Studies of the crisis since then credit the administration with holding back the Pentagon generals who were ready to invade Cuba and launch missiles at Soviet targets. Others say Kennedy had already signed the papers to invade Cuba.

My friends who were in the U.S. Army Reserves at that time — and who did not at all share my feelings of solidarity with the Cuban Revolution — recently told me how terrified they were when they saw the troop trains getting ready to take them south for the Cuban landing. Even the heavy anti-communist propaganda of that period was not enough to inspire them to face death. And the Pentagon itself expected 40,000 U.S. casualties in the first days of a Cuban invasion.

The masses were terrified of a nuclear exchange. In a worst-case scenario, a billion people might die. Nevertheless, the Pentagon generals were ready. That’s their job, serving their billionaire masters, no matter how many may die.

The U.S. rulers hated having a socialist island just south of Florida, inspiring the rest of the Western Hemisphere. The U.S. had already backed an invasion of Cuba in 1961 by Cuban counterrevolutionaries that flopped miserably at the Bay of Pigs. They would risk humanity’s existence to eliminate the Cuban Revolution.

U.S. nuclear-armed Intermediate Range Ballistic Missiles in Turkey and other countries threatened the USSR. To defend Cuba and to improve its strategic defense against U.S. aggression, the Soviet Union had begun placing rocket launchers in Cuba.

How Leninists respond to crises

During the week following Kennedy’s announcement, thousands demonstrated for peace at the United Nations. The message was mainly pacifist, urging “both sides” to pull back from nuclear nightmare. Through this difficult period WWP kept a principled class position: The USSR and Cuba had the right to defend themselves — it was the imperialists who must disarm.

In the end, the USSR pulled its rockets out of Cuba and the U.S. didn’t move the troop trains.

A look at the articles written at that time in Workers World, including those by WWP chairperson Sam Marcy, provides a lesson on how Leninists react to a worldwide crisis. We hope to make as many of these articles available on workers.org as possible in the coming weeks.

WW’s front page article that Oct. 26 ended this way: “The enemy of the working class, the enemy of the future of the world is here. The main enemy of humanity is the little clique of banker-billionaires that rules the United States.”

It was true then. It’s true now. And it convinced me. Not that it was possible to overthrow capitalism here — that came later — but it convinced me then that this ruling class was so dangerous, there was no alternative but to fight this ruling class by mobilizing the workers and oppressed peoples, and that Workers World Party had the intransigent attitude toward capitalist and imperialist rule that gave it the best chance of success.

Catalinotto has been a managing editor of WW since 1982.