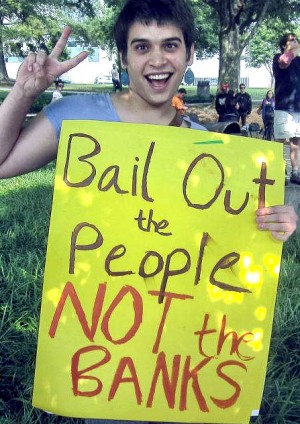 Andy is a student activist and public sector health-care worker in North Carolina. He is currently working as part of the movement to build Student Power Unions, the organizing model used by students in Quebec, Puerto Rico and elsewhere, across North Carolina. He is a member of the Durham, N.C., branch of Workers World Party.

I spent most of my teenage years indifferent to politics of any kind, but that didn’t mean I didn’t learn a few things about how capitalist society works. I learned to fear the police after my friends and I were arrested and charged with four different felonies for an act of vandalism on the back wall of a shut down, abandoned grocery store. Around the same time, I learned about how many people are executed every year in the U.S. I saw that capitalist laws highly value even the unused property of business owners, while considering human lives expendable.

In my late teens, I was invited by a friend to see a feminist film screening, and it really opened my eyes! The understanding of women’s oppression I got from that film was the first thread that I pulled at to unravel the rest of the fabric of my prior understanding of society. I got involved in a community group fighting sexism. As I worked with other activists, I came to see that women’s oppression, racism, capitalism and LGBTQ oppression are interlinked. I began to work with several different groups fighting around different issues. I didn’t know it yet, but I had already met several of my future Workers World Party comrades in these groups.

I was raised to think that communism was the worst evil that humanity had ever known, and that communists were robot-like villains bent on world domination! Today, I know that’s the furthest thing from the truth. I decided to join WWP after I attended a class on the Marxist understanding of the state presented by a young leader of Workers World Party. I was captivated by the systematic and historical analysis that he presented, and I was moved by his personal experiences with police brutality and home invasion. Here was one organization that had a crystal clear, objective understanding of the various struggles and oppressions I had fought against and the connections between them all.

But Workers World Party’s politics went further. They had a vision of building a society without capitalism or oppression, and a proven strategy to make that vision a reality. And I saw on the streets and in the community that Workers World Party comrades were working hard to carry that strategy out.

I spent the better part of the next year investigating other socialist organizations, and reading opposing viewpoints. I learned a lot in that time. And, having looked into the alternatives I might have chosen, I’m all the more confident that Workers World Party is a communist organization that is really doing the work necessary to bring about a socialist revolution in the U.S. n