These events illustrate what Karl Marx and V. I. Lenin taught long ago about how the ruling class uses the state apparatus it controls — police, courts, jails, army, corporate media — to attack popular governments and prevent social progress. 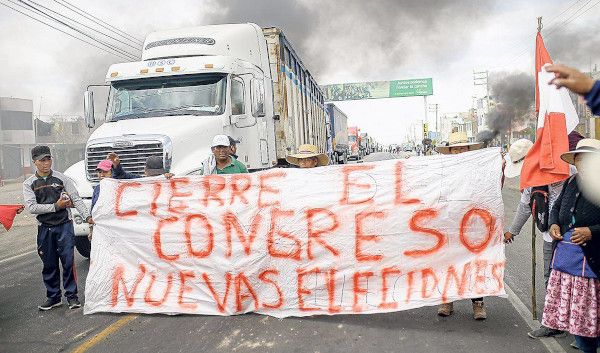 Opponents of the coup, or “golpista,” against former President Pedro Castillo block traffic, demand his release and new elections, Dec. 11

Reactionaries in the Peruvian Congress mounted their third impeachment attempt in 18 months against popular working-class leader President Pedro Castillo. From a peasant Indigenous family, Castillo became a schoolteacher and a union leader before challenging Perú’s corrupt politicians. He faced the open hostility and racism of Perú’s rich, who control the country’s banks, media, police, courts and armed forces.

To stop the third impeachment, Castillo ordered the reactionary Congress dissolved Dec. 7 and called for a provisional assembly to write a new Constitution. This last-ditch action failed when Perú’s Constitutional Court condemned it, slandering Castillo’s moves as an “attempted coup d’état.” The national police arrested Castillo, who today remains in prison, from where he asked México for asylum.

The world corporate media — the New York Times and the British-based Economist, for example — stood truth on its head and blamed Castillo for the coup that his enemies had plotted against Castillo since before he won the 2021 election.

Venezuelan President Nicolás Maduro said clearly that the far right wanted to send a message: “We are not going to allow you to govern.” (venezuelanalysis.com, Dec. 10)

Because Cristina Fernández was president herself and was previously the spouse of the late President Néstor Kirchner, the mass of working-class voters identify her — more than the president — with progressive and pro-sovereignty policies. For the same reason, Argentina’s ruling-class politicians targeted her with “lawfare.”

Lawfare means the elite use the judges and courts they control to twist the law against popular politicians like Cristina Fernández and push them out of office and into prison if they can. She was found guilty Dec. 6 and was sentenced to six years in prison, which she can and will fight.

Lawfare’s biggest impact was in Brazil, where it was used to depose President Dilma Rousseff in 2016 and keep Luis Ignacio “Lula” da Silva in prison during the 2018 election, handing that election to ultrarightist Jair Bolsonaro. And lawfare was a key weapon in the repression of the left in Ecuador.

The right wing in México has floated baseless corruption charges against President Andrés Manuel López Obrador (AMLO). Anticipating the rightist opposition, AMLO and his party, Moreno, called their own mass support demonstration on Nov. 27. Some 1.2 million people marched in Mexico City and gathered in the massive Zócalo square to support the government’s calls for progressive reforms. While mass protest is no guarantee of victory for AMLO’s program, it strengthens his hand against those plotting a coup or lawfare.

Consider Bolivia. In the fall of 2019, the wealthy 1%, with the police and army, overthrew the leftist government led by Evo Morales. During the following year, mass actions continued within Bolivia’s Indigenous communities, forcing a new election and a victory for Morales’ party as 2020 ended.

In his pamphlet on “State and Revolution,” Lenin quoted Marx to show the limitations of electoral victories in bringing about a change in class rule: “Particular attention should be paid to Marx’s extremely profound remark that the destruction of the bureaucratic-military state machine is ‘the precondition for every real people’s revolution.’”

Elections can indicate the political consciousness of the working class and poor — they show what the masses want — and even that is limited by the influence of money and the impact of reactionary ideology. The police, courts and army can impose capitalist rule despite mass anti-capitalist opinion, so a leftist politician can take office without really taking power.

Mass mobilizations can discourage illegal actions by a small group of conspirators working with the armed bodies of the state. But they offer uncertain protection unless the masses are armed and organized. While the election victories for leftist candidates in México, Chile, Brazil and Colombia are encouraging, imperialism and its local elite junior partners remain a dangerous threat and in most countries remain in control.

Contrary examples can be found in Cuba and Venezuela, where the state apparatus is in the hands of the left. Despite vicious sanctions and blockades that have inflicted massive suffering on the populations, the left governments have resisted the imperialists’ plots to overthrow them.

In both countries the governments have used their own control of the state apparatus — no longer in service to the rich — and combined this with mass popular mobilizations to defeat imperialist coup attempts. Revolutionaries should keep this history in mind, as they evaluate what a working-class government needs to do to defend itself and the masses it represents.