The United Nations Working Group of Experts on People of African Descent filed an amicus brief Dec. 6 with Philadelphia Court of Common Pleas Judge Lucretia Clemons regarding the case of Mumia Abu-Jamal. Their primary message to Clemons is that no judicial time bar should be applied when the defendant is a victim of historic racial bias that may have tainted the possibility of a fair trial and due process. 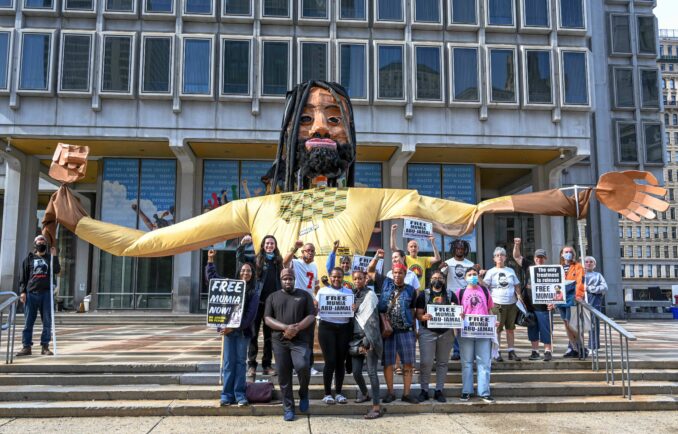 A press conference was held Dec. 13 to discuss the U.N. Working Group’s Amicus Brief and key evidence regarding the appeal by political prisoner Abu-Jamal. The amicus brief is now before the court. The evidence was first discovered in 2019 in six evidence boxes hidden in a remote storage area in the Philadelphia District Attorney’s office.

The next court appearance for Mumia will be held Dec. 16 at 8:30 a.m. at the Philadelphia Criminal Justice Center, 1301 Filbert St., Philadelphia. Abu-Jamal supporters will demonstrate outside during the hearing and the rally will be live-streamed at youtu.be/zT4AFJY1QCo.

Under the jurisdiction of the U.N. Human Rights Council, the Working Group has followed this case for years regarding the impact of systemic racism, the legacies of colonialism and the historic trafficking of enslaved Africans. Their brief states in part: “Presumed victims of racial discrimination are not required to show that there was discriminatory intent against them . . . Instead the U.N. Member State [United States] has an obligation to investigate and remediate discriminatory effects.

“. . . [T]he courts have an independent responsibility to a de novo review or a specific review in light of the possibility of racial animus, racial bias or systemic racism that may have tainted the guarantee of a fair trial and due process.”

Fernandez explained that the new evidence involves prosecutorial misconduct in relation to the state’s two primary witnesses and the prosecutor’s tracking of potential jurists by race — known as a Batson violation. During a hearing Oct. 19, Clemons indicated her intent to dismiss the appeal based on the delayed introduction of the evidence, ignoring that it was withheld from Abu-Jamal and his attorneys for over 36 years.

Clemons claimed Abu-Jamal and his attorneys should have known that Prosecutor Joseph McGill was using race to track jurists, while offering no explanation as to how the defense could have seen the prosecutor’s notes from across the courtroom.

Washington relayed other examples of police, prosecutorial and judicial racial bias and misconduct rampant throughout the case. The examples were all cited by the U.N. brief, section #35, which stated: “According to the information the Working Group received, a significant percentage of the police officers involved in gathering evidence and presenting the case were investigated and eventually convicted and jailed on charges, including corruption and evidence tampering, information that was unavailable to the jury at the time it was assessing the credibility, tendency toward bias and reliability of these officers.

“A court stenographer, Terry Maurer Carter, declared under oath that she heard the trial judge, Hon. Albert F. Sabo state to another judge, ‘I’m going to help them fry the n****r,’ directly referring to Mr. Mumia Abu-Jamal. The trial judge’s own history of convictions and sentences in capital cases also evidenced deep racial disparities, including a high number of defendants sentenced to death — 31 death sentences over a period of 14 years, 29 of whom were racial minorities.”

Wendell Griffen, a Black judge, addressed the impact of historic racism on the judicial system. “Often everyone in a courtroom is white except for the defendant. The judicial system has become essentially numb, blind and unwilling to acknowledge its own embrace of cultural racism. The people who decide the sentence are culturally unable to acknowledge the elephant in the room.

“Clemons is only the second Black judge to hear any aspect of Abu-Jamal’s case. Will she have the courage to say that there are too many factors here that compel for Mumia to justify dismissing the motion? This evidentiary hearing is required, because exculpatory evidence was concealed. Being a Black judge, one problem she will have is to explain to her white peers who are unable to understand their own cultural incompetence.”

Mumia’s grandson Jamal Jr. addressed the press conference during Q&A. “We all knew that corruption, racism and other inequalities designed for use against nonwhite people are real issues in this country. So many points of injustice are ignored by people holding the keys of justice in this case. Mumia is innocent. Injustices in his case have inspired so many people to put their boots to the ground to get to the root of this massive problem, where innocent people have to waste entire lives behind bars because this justice system is upheld by racism.”

A video of the press conference is available at: youtu.be/Xh38IKVc_oc. The full text of the Working Group Amicus Brief to Judge Clemons can be found on Mobilization4Mumia.com.