The 250 workers at HarperCollins Publishers walked out on strike Nov. 10 and formed a mass picket line outside the company’s Manhattan offices. The workers are represented by United Auto Workers (UAW) Local 2110. HarperCollins, one of the largest publishing houses in the U.S., is owned by News Corp., part of the Murdoch global publishing empire. Despite record profits reported last year, News Corp and HarperCollins have refused to increase workers’ wages, despite the high and rising cost of living in New York City.

Union workers are also demanding more diversity in staff hiring. They are asking authors and literary agents to boycott HarperCollins by not giving any new business to the publisher. Several authors and booksellers have voiced their solidarity with the workers. Author Elise Bryant wrote, “I stand in solidarity with the HarperCollins union. There are so many brilliant people who work so hard to make our books happen, and they deserve a fair contract and living wage.” (tinyurl.com/vhvb2w8v) 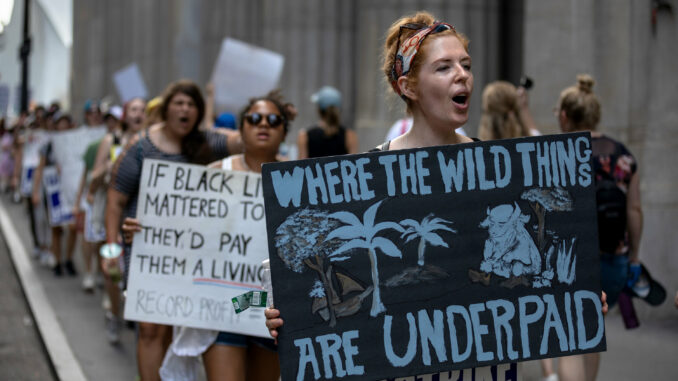 Talks resumed Monday in Pittsburgh with the five Pittsburgh Post-Gazette unions, out on strike since Oct. 6 after Block Communications cancelled their health care coverage. Newspaper typographers and mailers, Communications Workers Locals 14827 and 14842, walked out over the Unfair Labor Practices; they were joined by Teamsters drivers 205/211 and Graphic Communications/IBT 24M/9N press operators. Newspaper Guild-CWA journalists joined the strike Oct. 19.

The 100 workers have been without contracts since 2017; and they have had no wage increases for 16 years. Block Communications ended their health care benefits after workers had rejected paying $19 more per week and a $14,000 deductible.  Typographical Union Local 7/CWA 14827 is the oldest continuing union in the state of Pennsylvania.

The newspaper unions have called on advertisers and subscribers to boycott the paper. They are publishing a strike newspaper, the Pittsburgh Union Progress, as an alternative to the Post-Gazette. (The Guardian, Nov. 11)

Despite losing an election to become the first union at Home Depot, union supporters at the store in northeast Philadelphia know the fight is far from over. According to organizer Vincent Quiles, it is just the beginning: “We have paved the way for whatever will be the first Home Depot to organize.” He and fellow organizers filed a complaint with the National Labor Relations Board (NLRB) citing union-busting tactics by management during the organizing campaign. (tinyurl.com/4ej8p8k3)

The union campaign did shake things up. Lawyers for one worker at the Philly store have filed a complaint stating Home Depot violated Philadelphia’s Fair Work Week Law. The city enacted the law in 2020; it requires employers to provide hourly workers in the fast-food, hospitality and retail industries with predictable hours, as well as advance notice of schedule changes. The company failed to provide workers at the store with written work schedules in advance.

Workers at the Columbus Art Museum in Ohio voted overwhelmingly to unionize, only two months after announcing their intention to form a union. They formed the Columbus Museum of Art Workers Union, an affiliate of AFSCME Ohio Local 8. The union will begin negotiations to address staffing cuts that have increased their workloads without adequate compensation.

Several museums across the country have been unionized in recent months, including the Whitney Museum of American Art in New York City, the Museum of Contemporary Art in Los Angeles, the Art Institute of Chicago, the Museum of Fine Arts in Boston and the Philadelphia Museum of Art. The latter was forced to negotiate a contract after union members went on strike just prior to the opening of a major Matisse exhibit.

The CMAWU expressed their gratitude for the strong support and solidarity from the Columbus community.