The Cherokee Nation has renewed its long-standing demands that the U.S. Congress honor its treaty obligations by seating a nonvoting delegate from the Nation in the House of Representatives. 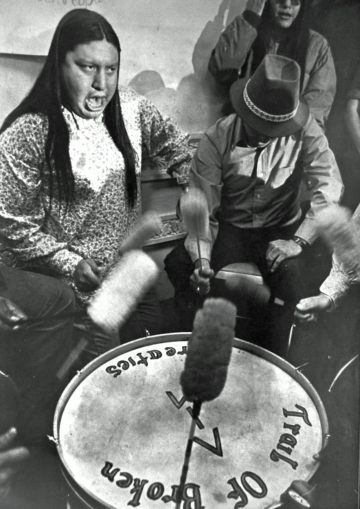 A drum circle during the Trail of Broken Treaties occupation of the Bureau of Indian Affairs building by the American Indian Movement, Washington, D.C., November 1972. Credit: Geoffrey Gilber

The right of the Cherokee Nation to have a congressional representative was a key concession in the 1835 Treaty of New Echota. Flunkies of President Andrew Jackson’s administration coerced a minority of the Cherokee leadership into signing the treaty, thus forcing the Nation to surrender its sovereign territory. This gave the sham of “legality” to the genocidal Trail of Tears death march to land in present-day Oklahoma. Over a quarter of the Cherokee population died on the Trail of Tears.

Now, 187 years later, the U.S. settler-colonial government continues to flout even the lopsided terms of the New Echota Treaty by refusing to seat a representative of the Cherokee Nation in Congress. “For two centuries, Congress has failed to honor that promise,” said Chuck Hoskin Jr., Principal Chief of the Cherokee Nation. “However, the Treaty of New Echota has no expiration date.” (youtube.com/watch?v=2ClBxXALQ0c)

The refusal by Congress to honor its treaty obligations to the Cherokee Nation is not an isolated case. The United States has violated every one of the over 400 treaties it has made with Indigenous nations.