Nov. 6 — What do activists who support Palestine do when the Israeli Philharmonic Orchestra comes to San Francisco?

They organize a strong picket line and demonstration in front of Davies Symphony Hall! Tonight the Palestine Action Network and supporting groups greeted ticket holders with the resounding chant, “Zionism is racism!” 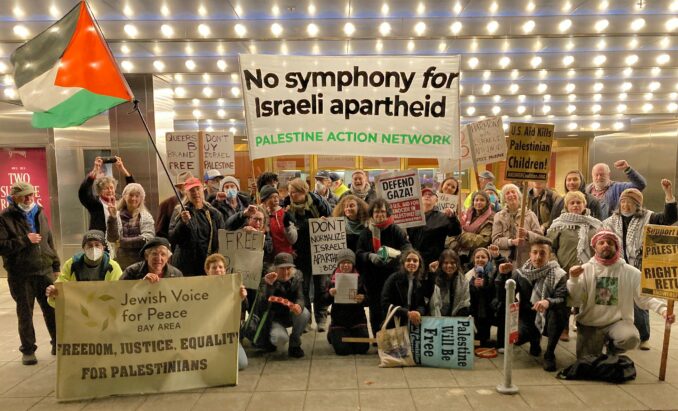 On short notice, and on an evening that threatened rain, a large group of demonstrators turned up to protest a concert by the Israeli Symphony. A large banner, “No symphony for Israeli apartheid,” was in the lead in a continuous, militant picket line in front of the hall doors. Chants demanding “From the River to the Sea, Palestine must be free” greeted concert goers.

A PAN flyer was distributed that detailed some of the crimes of the Israeli regime, including the assassination of Shireen Abu Akleh, a Palestinian American journalist, the extrajudicial killings of 118 Palestinians in the West Bank and the continued evictions of Palestinians from their homes.

The PAN statement emphasized, “It is past time to stop Israel’s crimes against humanity,” noting the contradiction that the San Francisco Symphony welcomes the Israeli Philharmonic while Israel prevents Palestinian artists from traveling to other countries to perform.

The militant picket line, with its chants and noisemakers, drew attention to the Palestinians’ struggle for freedom and for return to their homeland. One of the most popular chants, “U.S., Israel, you can’t hide, we charge you with genocide!” summed up the message of the evening.