The Cuyahoga County Jail Coalition issued the following statement Nov. 6 in response to three recent deaths in the jail, located in downtown Cleveland. 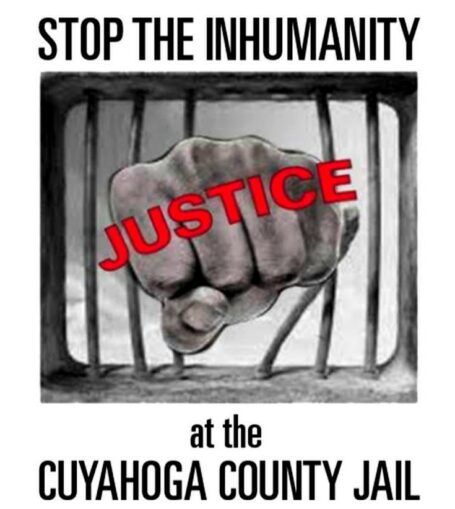 The Cuyahoga County Jail Coalition is grieved to report that within the past month, three people have died while in police custody inside the Justice Center [where the county jail is located]. On Oct. 11, Ashraf Hasan Nabeel Aljaf (33) was arrested, fell ill and died upon arrival at the jail.

Just this Tuesday [Nov. 1] , Mark Turner Jr. (32) and Melissa Munson (47) both died within 24 hours of each other. Turner was found unresponsive in his cell after arriving the previous Friday, and Munson was found in distress only hours after being booked. Causes of their deaths are inconclusive. We would like to hold space for the lives lost and the loved ones they left behind.

No one should die in state custody, and yet these deaths make at least 16 total people who have died at the Cuyahoga County Jail since 2018. Countless other deaths from the COVID-19 pandemic are unreported, a violation of the Death in Custody Reporting Act. Despite preventative attempts, the jail continues to experience problems with overdoses, suicides and assaults on inmates and officers.

What is happening in this county is happening nationwide, as jail deaths increase in sync with the rise of the total incarcerated population. Someone in jail is more than three times as likely to die from suicide as someone in the general U.S. population; and since 2000, drug-related deaths in U.S. jails have almost quadrupled (Prison Policy, 2021).

These numbers alone highlight an infuriating flaw in our society. The historical and current response to health crises has been incarceration. As poverty has been criminalized, jails and prisons became places to dispose of people.

This persistent neglect is intolerable. Cuyahoga County asserts its only solution is and has been to expand incarceration, despite the community call for alternatives.

The Jail Coalition will not stand for this injustice. We will not be silent. We continue to fight for lives and against atrocities associated with the County Jail. We advocate for the rights of all [who] suffer due to the circumstances that surround the County Jail.

We cannot continue to separate the jail from the criminal justice system and policing, as they are all connected together. When we transform the criminal justice system, we will drastically reduce the jail population. We hold local officials accountable for their policy choices that continue to induce harm. We must focus on building a more just future within our community, that centers care over cages.