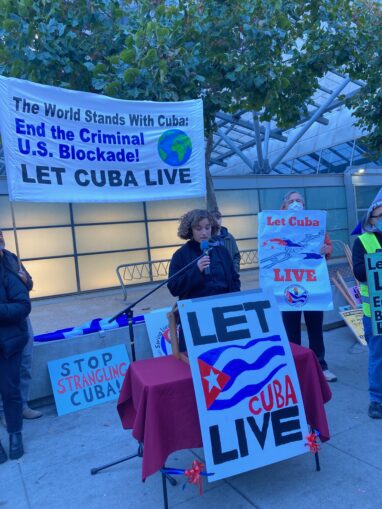 Nov. 3 — As the 30th United Nations General Assembly vote condemning the U.S. blockade against Cuba was taking place, angry protesters in the Bay Area gathered at the San Francisco Federal Building and took to the streets to demand “Let Cuba live!”

The demonstration, organized and endorsed by a broad coalition of organizations, specifically called out Nancy Pelosi, Speaker of the House of Representatives, elected from California. The rally demanded she work to end the blockade, remove Cuba from the U.S. “State Sponsors of Terrorism” list, reverse all U.S. sanctions, including Trump’s 243 “coercive measures,” and help Cuba rebuild from recent climate catastrophes.

Many speakers expressed their solidarity with Cuba, its revolution and its accomplishments. “We’re here today because we stand with Cuba and defend Cuba against the decades-long campaign launched by the U.S. through deadly sanctions, blockade and imperialist propaganda that attempt to villainize and isolate Cuba,” stated Lujain Al-Saleh, member-leader of the Arab Resource and Organizing Center in San Francisco.

Al-Saleh recounted the long history of Cuban solidarity with the liberation of Palestine and called upon everyone to unite to “revive an anti-imperialist and internationalist front that challenges U.S. imperialism on every level.”

The protesters then marched to the city’s U.N. Plaza, where on the steps of the statue of Simón Bolívar the Liberator, people gathered to loudly chant: “Cuba Sí! Bloqueo No!”