For two weeks beginning Oct. 1, Sysco Boston — an outpost in Plympton of the global food and food equipment distributor to thousands of schools, hospitals, military mess halls and assisted-living facilities — took a “slash and burn” approach to contract negotiations out of the playbook of Amazon and Starbucks. With the armed assistance of massive regional police forces from Boston, Plymouth and Brockton, Sysco ran scab-driven trucks through the strike lines of Teamsters Local 653. 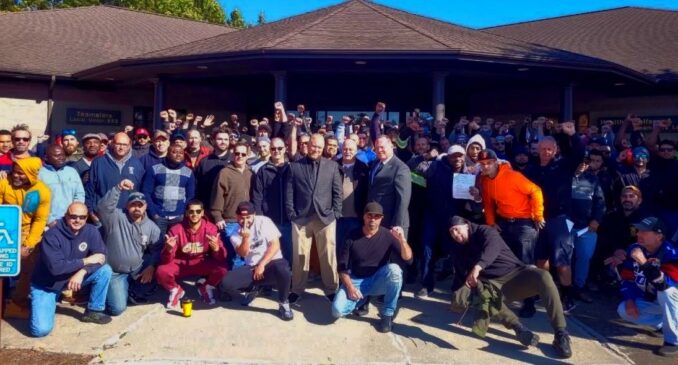 Cops from the neighboring sheriff’s department of “America’s Hometown” Plymouth, accustomed to beating heads in their infamous county jail, were furious at being caught off guard. They rushed in with their military-supplied equipment and rioted, throwing strikers to the ground and 16 Teamsters into arrest wagons.

On Oct. 20 Local 653 voted nearly unanimously to ratify a new five-year contract with an unprecedented $11-an-hour wage increase. The new contract beat back many onerous concessions demanded by Sysco, preserving and improving the Teamsters Local 653 health plan and other benefits and working conditions. This victory catapulted Teamsters negotiations with Sysco nationwide.

That day the Teamsters International issued a press release, stating in part:

“After months of all-out economic warfare between Sysco and Teamsters across the country, the union has achieved a phenomenal victory. This morning, workers at Sysco Boston voted overwhelmingly, 215-2, in favor of a record-breaking agreement, successfully ending the strike with a resounding victory for more than 300 members of Local 653 in Plympton, Massachusetts.

“The new five-year agreement marks the end of this round of coordinated bargaining, following major contract wins for Local 104 members at Sysco Arizona and Local 317 members at Sysco Syracuse. Local 653’s strike lines were supported by Local 104, and more locals promised to honor the line if pickets appeared at their facilities. This national effort, which was acknowledged by the company, was the key to the great results achieved at Sysco Boston.”

Quoted in the statement, Teamsters General President O’Brien said, “Corporations will fear the Teamsters. Their ability to hold down our members is over. The Teamsters are ending it.  Any company that bullies workers will be met with the full firepower of this union. Our momentum cannot be stopped. We still have open contracts around the country, and we will strike again and again to protect our members.” (teamsters.org)

This reads like a manual for today’s upsurge of young workers taking on giant capitalist monopolies, which have posted record global profits as the global pandemic imposed dangers and hardships on frontline, essential workers.

Steve Gillis is 37-year member and an elected leader of the Boston School Bus Drivers Union, United Steelworkers Local 8751, now working for the union’s members and retired from driving.