As part of a countrywide campaign, people picketed the Amazon-owned Whole Foods store in San Francisco’s Noe Valley neighborhood Oct. 9. Neighbors said they support the workers who are fighting to unionize Amazon and Starbucks in the face of vicious union busting by these corporate giants. 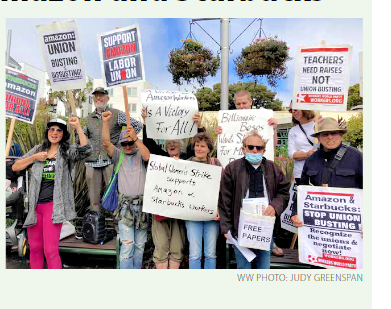 The action was organized by a local coalition including the Support Amazon Workers Network, United Front Committee for a Labor Party and the International Action Center.

The San Francisco Labor Council passed a resolution Sept. 12 to “support the upsurge in union organizing at Amazon, Starbucks and other nonunion workplaces, by endorsing and participating in actions organized this fall by the Support Amazon Workers Network and others . . .” The resolution highlighted “a national wave of union organizing . . . the biggest upsurge of worker organizing since the 1930s and ’40s.”