Heroin (and by connection fentanyl analogues) are in the hands of the proletariat. People are using these to numb feelings of oppression and feelings of anger at their oppressed conditions. Marx famously said, “Religion is the sigh of the oppressed creature, the heart of a heartless world and the soul of soulless conditions. It is the opium of the people.” 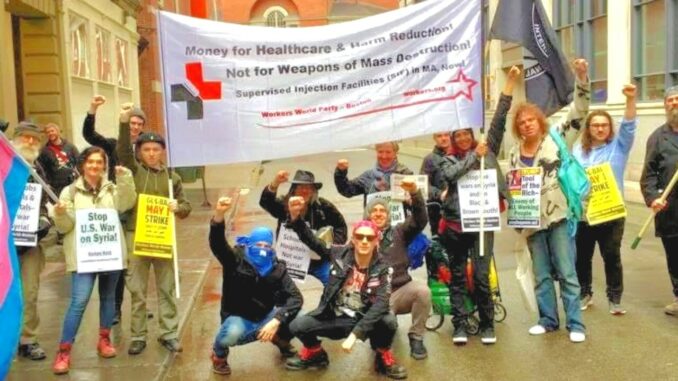 Now opium derivatives, like heroin, are once again the actual opium of the people. People use heroin and fentanyl analogues to escape oppression temporarily. Black Panther Michael Cetewayo Tabor documented in “Capitalism Plus Dope Equals Genocide” that heroin was cut and sold to Black people in the internal colonies of the U.S. in the 1960s because it offered the youth an illusion of escape from their conditions of neoslavery.

Now, in 2022 the chickens have come home to roost, as Malcolm X said. White people have experienced the tragedy, the loss, the chaos of drug addiction. This return came differently from former years, though. The U.S. government was directly responsible for the addiction of Black youth to heroin.

This time around, it was the drug manufacturers — Purdue Pharma, Teva Pharmaceuticals, Johnson & Johnson — who masterminded the drug epidemic. The Sacklers, owners of Purdue Pharma, had their names torn down in a revolution from below against this addictive process, their name cast as low as the bodies in the ground.

In the chaos of the drug epidemic, addicts have been working together to form drug-user unions and organizations that help to fight the scourge of overdoses. In Seattle the People’s Harm Reduction Alliance and the Urban Survivors Union, in collaboration with researchers from the University of Washington, did research into what would happen if intravenous heroin users were given a specially designed pipe for smoking heroin. (tinyurl.com/498uw5s9)

Prior to this study and the intervention of the PHRA and the USU, there was no singular pipe for heroin users to smoke from. (It’s more accurate to say “vaporize,” however, as direct fire destroys opioids.)

In 2019, Dr. Tom Fitzpatrick — one of the authors of the scientific paper written about this phenomenon — found that the people who were given specially designed pipes were less likely to use heroin intravenously.

Specifically, the number of people who exclusively injected heroin dropped to 32%, down from 43% before the heroin pipes were distributed. Additionally, the number of people changed who used both intravenously and through smoking, up to 45% of those users from 36%. This suggests that the pipes had helped push people away from intravenous use somewhat.

Of all the people involved in this study, 44% of the respondents used the pipes to get high, with 34% saying that the pipes reduced their frequency of injection. The study itself says, “The proportion of SSP [Syringe Service Programs] clients who exclusively injected heroin was lower by a quarter, while the proportion who both injected and smoked heroin was higher by over a quarter after heroin pipe distribution began.” This means that more addicts were smoking than intravenously using it, even if they didn’t stop intravenous injection altogether.

The benefits of having a specially designed heroin pipe, are threefold:

The importance of harm reduction is not to be understated. Hundreds of thousands of people have died of an opioid overdose since the invention of OxyContin (oxycodone) and since heroin, fentanyl and other relatively inexpensive opioids have taken center stage.

Harm reductionists agree on two important areas: safe supply (giving addicts access to a safe supply of opioids) and the need to expand safe syringe programs and their distribution of the newly devised heroin pipe.

These advocates also tend to think that pushing President Joe Biden and other politicians to end or change the War on Drugs is the pathway to saving lives.

But that’s not true. Although the work being done on the ground for addicts is a baby step; what the addict needs is a revolution — a socialist revolution.

Why? Because the system is incredibly corrupt. There are politicians and attorneys general who quit their positions to work for Purdue Pharma. The Food and Drug Administration — supposed to manage health — failed to do its job in relation to drugs, until mass outrage made clear there would be consequences for not correcting OxyContin’s “only 1% chance of addiction” lie.

The doctors and “pain clinics” gave away OxyContin like candy. Get headaches? Take an OxyContin! Got a toothache? OxyContin! There were parties celebrating the “wonder drug.” When it was reported that some people were getting addicted, one prominent doctor said it was “pseudoaddiction” and the treatment of that was — OxyContin! There’s more than this, so much more. (tinyurl.com/4u744sr)

Almost 1 million people are now dead from this opioid epidemic. Some of them were friends of this writer: Paul, Jessika, and others. This generation is being ravaged by drugs, legal or illegal. Some of us live in poverty, like those in Appalachia that had tens of thousands, or perhaps more, pills sent to their pharmacies to fill the orders signed by shady doctors who were in it for money.

Comrade Michael Cetewayo Tabor — addicted before he was 20 and then freed by political struggle and the Black Panther Party — said: “It is the youth who make the revolution, and it is the youth who carry it out.”

Let’s hope he’s right and this nightmare can end.