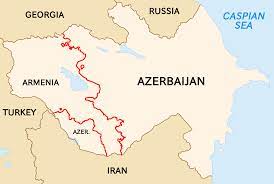 The imperialist U.S. government is actively looking to open up new fronts in its current proxy war in Ukraine, in addition to targeting Russian economic infrastructure and turning up the pressure on NATO subordinates.

On Sept. 12, fighting broke out on the border between Armenia and Azerbaijan, when Azerbaijan began shelling Armenia. The fighting took place this time on Armenia’s eastern border, rather than the Nagorno-Karabakh enclave inside Azerbaijan.

Cease-fires have been reached and occasionally broken in the days that followed. In response to the latest round of fighting, Western-oriented media has focused its attention on protesters who are demanding the withdrawal of Armenia from the Collective Security Treaty Organization. The CSTO is a defense pact made up of six former Soviet Republics including Russia. Armenia is a member of the CSTO; Azerbaijan is not.

Western media has been heavily critical of Russia for not coming to the defense of Armenia militarily against Azerbaijan and instead choosing to broker cease-fire negotiations between the two countries. The media has painted this as a “betrayal” by Russia of Armenia and a violation of the mutual defense pact.

This effort by the U.S. to pull Armenia out of the orbit of Russian influence, out of the CSTO and gradually into the orbit of NATO, is likely to be used as another springboard for a new front in the proxy war. With Ukrainian armed forces struggling to make and keep gains, as well as find a source of weapons and ammunition, and with the mobilization of hundreds of thousands more Russian troops on the way, the U.S. may need for a new front to open to turn the tide in its favor.

Russia had previously deployed peacekeeping troops to stave off fighting in Nagorno-Karabakh. But with the war in Ukraine in full force, Russia is not likely to be able to send troops to intervene. After the latest round of fighting, rather than mobilizing troops against Azerbaijan, Russia’s response was to facilitate cease-fire negotiations between the two countries.

The irony of this being painted as a “betrayal” by the U.S. is clear when one considers what the U.S. media might be saying if Russia had intervened militarily. Surely the U.S. would condemn Putin as a bloodthirsty warlord out to gobble up more territory.

The U.S. can play both sides of the conflict to paint Russia into a corner. If Russia intervenes, this splits its forces and risks overcommitment. If Russia does not intervene militarily, the U.S. can posture as the stronger friend to Armenia and gradually wear away at its political friendship with Russia.

U.S. House Speaker Nancy Pelosi visited Armenia after the September attacks to do exactly that kind of posturing, trying to cozy up to Armenia the same way she did with Taiwan, speaking of defending “freedom and democracy.”

Again as in Ukraine, Taiwan and Armenia, the U.S. does not insert itself to “defend” these countries but to exploit them for imperialist interests.

In a speech to the Commonwealth of Independent States — which includes both Armenia and Azerbaijan — Russian President Vladimir Putin said: “Following their goals, our geopolitical adversaries, our opponents, as we said just recently, are ready to expose everyone, any country, to turn it into the epicenter of the crisis, provoke a color revolution and unleash a bloody massacre.

“We have seen all this more than once. . . . We also know that the West is working out scenarios for inciting new conflicts in CIS space. But we have enough of them anyway. It is enough to look at what is happening now between Russia and Ukraine, what is happening on the borders of some other CIS countries.” (tinyurl.com/2xvdn4s3)

These remarks present the reasoning behind Putin’s calls for restraint, regarding the ongoing conflict in Armenia, rather than an escalation, which would only benefit the U.S. war drive — with Russia, Armenia and Azerbaijan in the crosshairs.

All these developments are happening in Europe and Central Asia with countless billions being spent by the U.S. government on war, which benefits only a few military contractors and finance capitalists.

With the U.S. sending more than $50 billion to Ukraine to fuel this proxy war, what do U.S. workers have to show for it? Not health care, housing, decent jobs or education. What do the workers of Ukraine have to show? Nothing but a steep death toll and a bleak future. When will enough be enough?

It is the world historic role of the working class to extinguish the flames of capitalist-imperialism before the whole world is scorched irreparably.

A socialist revolution in the U.S., the core of imperialism, could bring the cycle to an end. The process of the struggle toward that revolution can construct a system based on the fulfillment of human need and the nurture of a healthy planet.