When the Supreme Court of the United States overturned the 1973 Roe v. Wade decision legalizing abortions June 24, the top judicial body declared war on millions of women. The court upended the fundamental right of individuals to make decisions about their own bodies and to access essential health care.

The six-justice conservative majority declared that states could and should legislate laws concerning abortion, including total bans. In so doing, they transferred the innate rights a pregnant person has to bodily autonomy to the state. 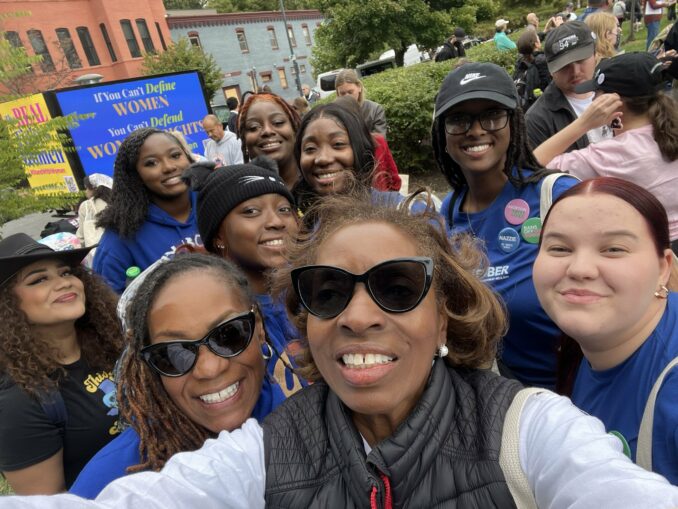 The court’s right-wingers pushed through this racist, sexist and classist ruling. It was immediately clear that the severest impact of these bans would fall primarily on Black, Latinx and other women of color, im/migrants and those with low incomes. Women with disabilities, youth, people of various gender identities and rural residents would all be impacted.

Since the SCOTUS decision, 14 states, mostly in the South, have enacted abortion bans, some with no exceptions for rape, incest or the health of the pregnant person. More bans are expected. After the ruling, the Texas Legislature enacted a more repressive ban than it had implemented Sept. 1, 2021. There are legal challenges to some states’ bans.

Abortion seekers living in states with bans have to travel out of state, often hundreds of miles, which is costly. They must take days off from work; and since most of them are parents, they need child care. The economic impact is greatest on women of color who have the lowest wages. For many, the avenue to obtaining an abortion is now closed.

Even those with pregnancies with severe fetal anomalies or serious health problems are having trouble accessing abortions in states with bans; many have to leave the state. Doctors and hospital officials fear prosecution, so they are reluctant to perform the procedures, even when people with wanted pregnancies are faced with health- or life-threatening crises.

And there is the danger of further criminalization of those who seek abortions or who suffer miscarriages and “poor pregnancy outcomes,” especially Black, Latinx and other women of color. 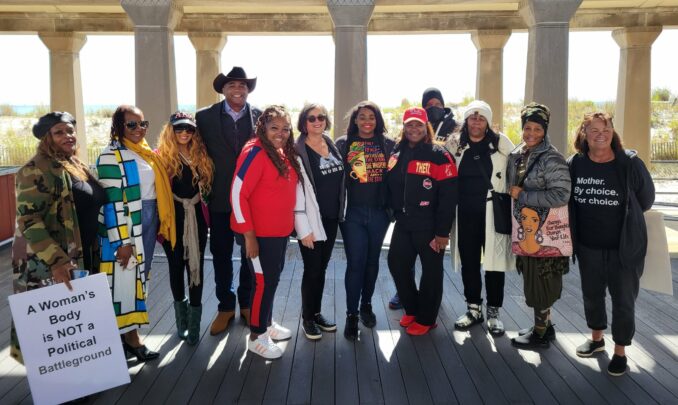 Dana Sussman, acting director of the National Advocates for Pregnant Women explained, “Pregnancy loss prosecutions were already rising under the protections of Roe. . . . Now that the Supreme Court has stripped away the constitutional right to abortion, legal experts expect that prosecutions may continue to increase. Our data shows 1,700 cases [involving pregnancy loss] since 1973 and a rapid acceleration in the past 15 years.” (NPR, July 3)

For many reasons, the focus of reproductive justice activists must be on defending, protecting and advocating for the reproductive rights of Black, Latinx and other women of color, who are under siege by anti-abortion reactionaries, in and out of government. Fighting the racism inherent in this attack is a priority.

As Sister Song, the Women of Color Reproductive Justice Collective, stresses on Facebook: “With the overturning of Roe v. Wade, reproductive rights are coming under increasing attack. However, the mainstream political discourse about reproductive rights and access to abortion too often narrows this discussion in a way that replicates systemic oppression and white supremacy.”

Protests have taken place since Texas implemented a six-week abortion ban last year. A large, multinational rally was held in front of SCOTUS on Dec. 1, 2021, when the state of Mississippi argued for the overturn of Roe in the Dobbs v. Jackson Women’s Health Organization case. Many nationally coordinated and local demonstrations have taken place since then, demanding an end to all bans and the legalization of abortions. 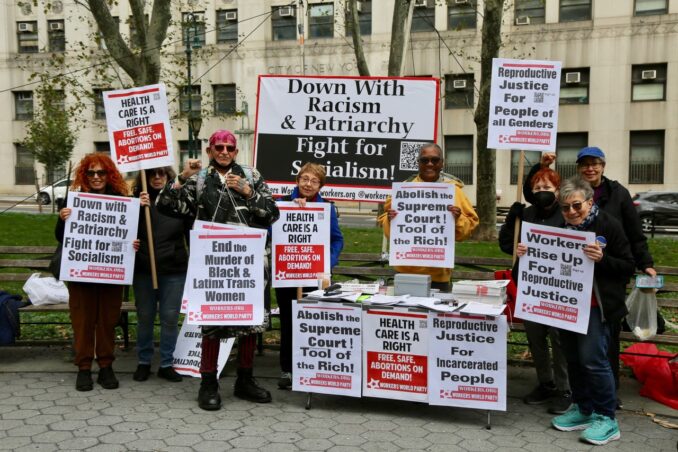 The Aug. 2 electoral victory in Kansas, where the majority of voters chose to keep the right to abortion in the state constitution, buoyed pro-choice forces countrywide. Even though this was a win through the ballot box, it was nevertheless a meaningful step forward in this struggle.

Activism in the streets and a Planned Parenthood legal challenge caused an Arizona court Oct. 7 to put a stay on a draconian abortion ban dating back to 1864 — when the U.S. Army was stealing the territory from the Apache Nation and other Indigenous nations. And it was decades before women could even vote!

Networks of abortion providers, funders and advocates are aiding pregnant people in going out-of-state or in obtaining medication abortions (pills). Eight states have legalized abortion in such a way as to enable out-of-state abortion seekers to get the medical care they need.

Some ingenious work-arounds to the bans are being proposed. For instance, by the end of this year, Planned Parenthood plans to utilize a 37-foot recreational vehicle as a mobile clinic to travel around the Illinois border to assist abortion seekers from neighboring anti-abortion states.

The Women’s March organization called for nationally-coordinated actions Oct. 7-9, and its organizers projected 400 cities would have demonstrations, with a Oct. 8 national protest in Washington, D.C. From New Jersey to Arizona and Alabama to Colorado, thousands of people demanded nullification of SCOTUS’ ruling and reinstatement of the right to access safe, legal abortions. 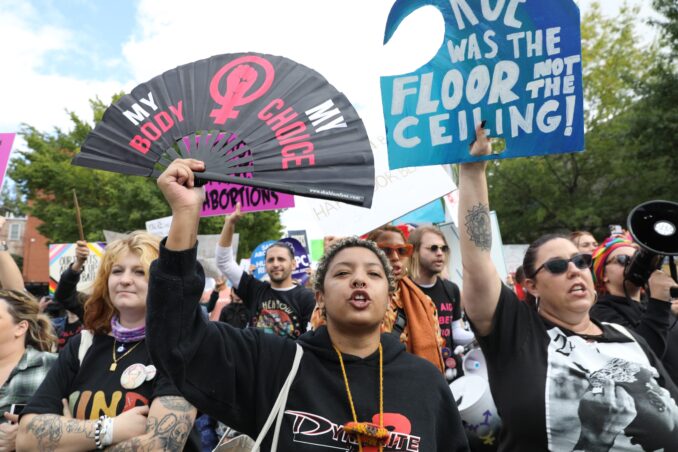 The AFL-CIO, American Federation of Teachers, the Service Employees Union and a host of organizations endorsed these protests.

The Women’s March was initiated to organize mass opposition to the presidency of misogynist and bigot-in-chief Donald Trump. On Jan. 21, 2017, the day after his inauguration, millions of women and their allies marched all over the country. There were solidarity actions in other countries.

In January 2020, the fourth annual Women’s March Global was held under the slogan of “Women’s rights are human rights.” Despite a change in leadership and some policies, protests took place in 250 U.S. cities to decry Trump’s cruelty and bigotry and in 23 countries on various issues. 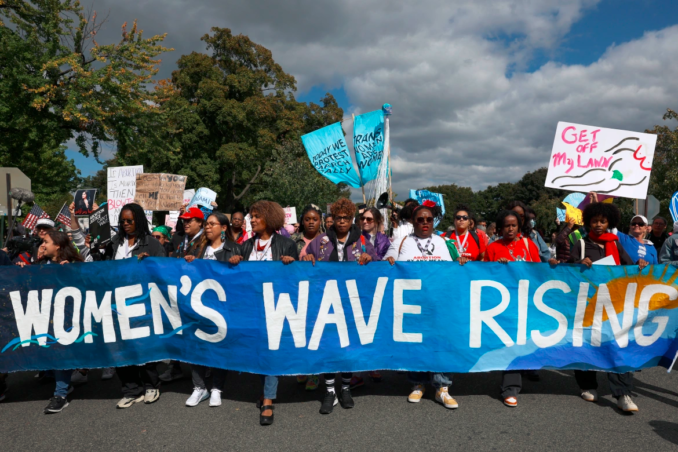 Many reproductive rights activists are looking to the coming U.S. midterm elections, hoping Democratic candidates win offices, to regain legal abortions. Rally speakers reinforced this strategy. But it should be remembered by those fighting for legal abortion and reproductive justice, that it was a militant mass movement, not politicians, that pressured the majority Republican-appointed Supreme Court to legalize abortion 49 years ago.

Some reactionary politicians and their backers are pushing for a total national abortion ban. This is dangerous; the threat must be taken seriously and strongly opposed.

This makes it urgent that the movement for abortion rights and reproductive justice use every arena and every tactic, legal or otherwise — sit-ins, boycotts, picket lines, demonstrations, job actions — to fight for this human right. An independent grassroots movement is needed, composed of Black, Indigenous, Latinx, Asian, Arab, low-income individuals, organized and unorganized workers, migrants, people with disabilities, youth and seniors to push back this attack on millions of people. And with the most oppressed in the leadership.

Here are a few march highlights:

In Syracuse, New York, people, mostly young women, met in Forman Park in the heart of the city to unite for action for reproductive freedom and access to abortion and contraception. Those attending ranged from Democratic Party organizers to young socialists, but all joined in chanting energetically: “Pro-life is a lie! They don’t care if women die!” The crowd marched over a mile to the Hanley Federal Building to conclude with a round of rousing speeches. 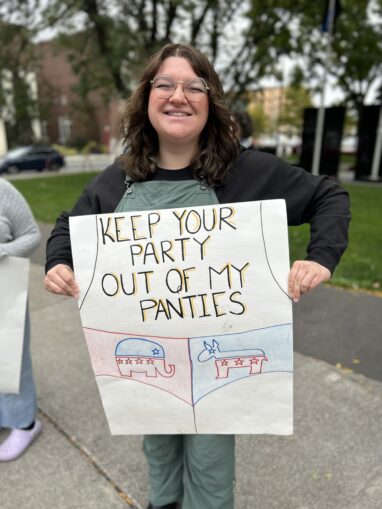 Over 200 Clevelanders, mostly young, attended a rally Oct. 8 at Market Square Park called by Women’s March Cleveland. A number of elected officials and activists, the majority of them African American, spoke out against attacks on abortion access. A spirited march followed the rally on the city’s Near West Side. 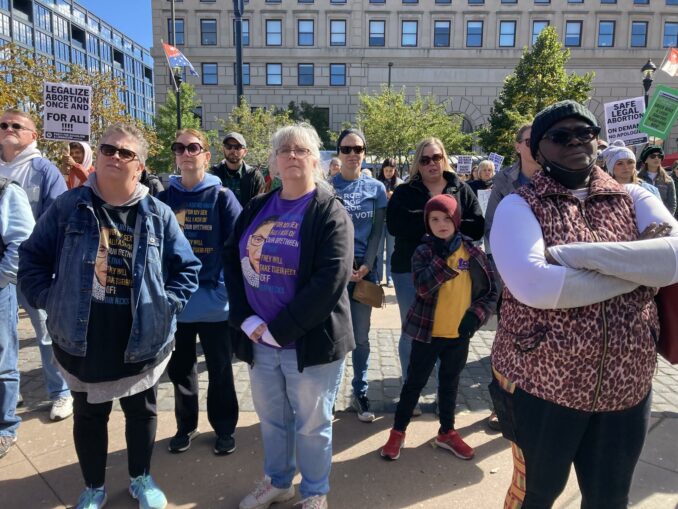 That politicians are feeling pressure around this issue was shown by more than their presence at the demonstrations. A Hamilton County Common Pleas judge ruled in favor of Planned Parenthood and Ohio abortion providers who sued to block enforcement of a six-week abortion ban passed by the state legislature. The bill is on hold now, and the previous law allowing abortions up to 22 weeks of pregnancy is back in effect.

Over 100 protesters, including many from the Latinx community, marched through San Antonio, Texas. Judy Lerma, of Workers World Party and a nurse, told the crowd that all women should have a right to access every type of health care, including abortions. 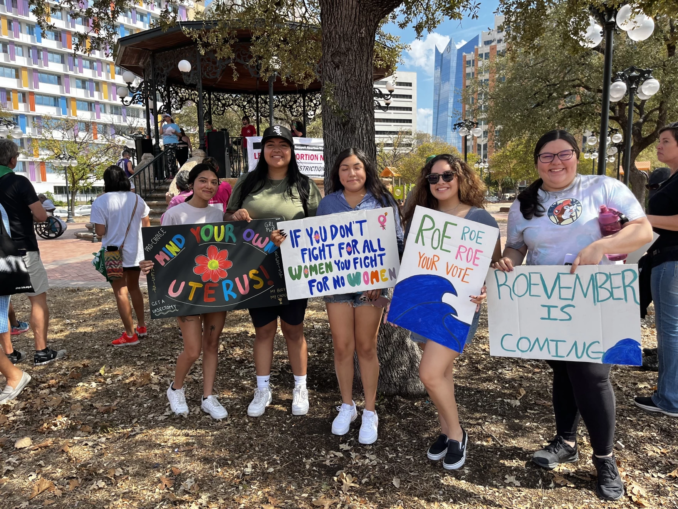 In Seattle, 500 people energetically marched from Carol Anderson Park 1½ miles to the Pike Place Market downtown. During the entire march, protesters chanted: “Back up, back up, we want freedom! All your sexist politicians, we don’t need them!” 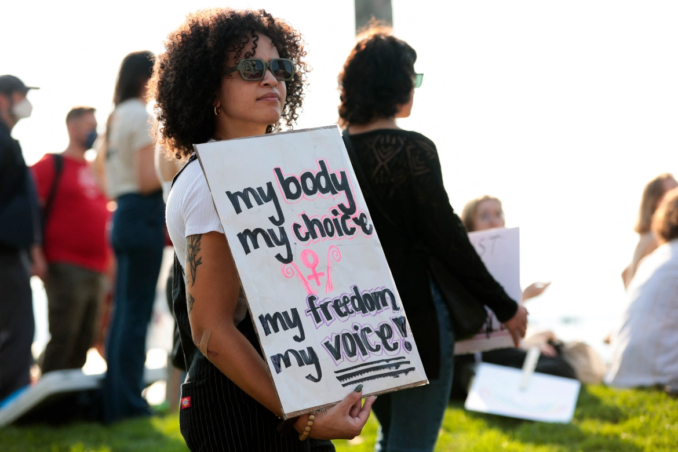 The Seattle Education Association had a contingent and carried their banner. Bystanders enthusiastically responded to the march. Fists were raised, and people photographed and videoed the action. Demonstrators responded with enthusiasm to distributions of Workers World/Mundo Obrero newspaper. 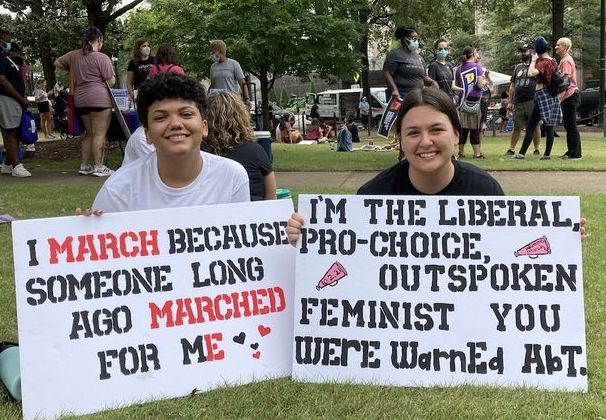 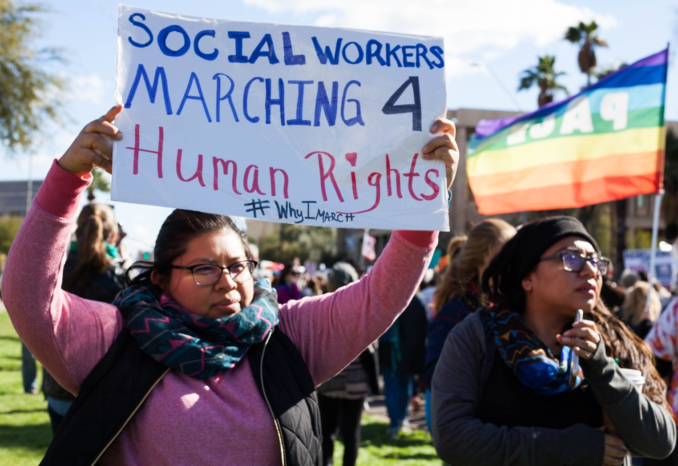