The NWSL is a professional soccer league of 12 Division 1 teams, featuring national team players from around the world.

The summary states: “Our investigation has revealed a league in which abuse and misconduct — verbal and emotional abuse and sexual misconduct — had become systemic, spanning multiple teams, coaches and victims. Abuse in the NWSL is rooted in a deeper culture in women’s soccer, beginning in youth leagues, that normalizes verbally abusive coaching and blurs boundaries between coaches and players.” The full report can be found at tinyurl.com/jurch75c.

U.S. Women’s National Team midfielder Lindsey Horan, a member of the Portland Thorns since 2016, told the media Oct. 7: “I also want to say that this isn’t just it. It’s not just the NWSL. This is women’s football in general. It’s women in general. 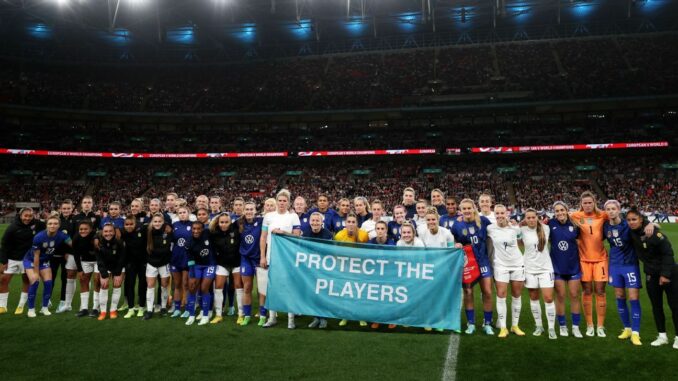 “We have these problems all over the world. It’s a global, systemic problem. So I don’t want that to be the end point — this investigation came forward, and obviously we’re thankful for that, but it took way too long. This whole thing was prolonged incredibly, and I sit here and I’m like, ‘It’s not done.’ This is all over the world, and, being a player in Europe right now, I know that.” (ESPN, Oct. 7)

Horan said it best when characterizing the report as not just isolated to women’s soccer but as a worldwide problem for women and gender-oppressed people.

There is the recent scandal within the National Basketball Association’s Phoenix Suns organization in September, when billionaire majority owner Robert Sarver was suspended for a year for racist and misogynistic behavior. He is in the midst of selling the team due to pressure from prominent NBA players, corporate sponsors and within the Suns organization. (Read workers.org/2022/09/66767/)

And then there was the U.S. gymnastics sexual abuse legal suit against Dr. Larry Nassar, who is serving multiple life sentences after being convicted of child molestation of 150 female gymnasts.

At least 500 teenage and adult gymnasts were part of a civil lawsuit, explaining in graphic terms when, where and how they were traumatized by this doctor, whose job was to prepare these athletes for Olympic competition.

In December, the gymnasts agreed to a $380 million settlement from those who put Nassar in the position to abuse them — like the U.S.A. Gymnastics, the U.S. Olympic & Paralympic Committee and Michigan State University. (Read workers.org/2018/01/35215/)

A common theme running through all three of these developments is that many of the survivors and victims, who attempted to talk to authorities about the emotional, physical and mental anguish they experienced, were first met with either disdain or outright dismissal.

Former officials with the NWSL did not cooperate with the investigation and actually protected coaches like Riley and Holly by reassigning them to other coaching jobs.

It is capitalism that reinforces sexism, misogyny, racism and other ills of class society that must be eradicated, root and branch, to stop the vicious cycle of men using their positions of power to treat women and gender-oppressed people as exploitable objects.

In the end, it is capitalism — a system that promotes profits over human beings in every institution, including sports — that failed these players and countless others.