World leaders, technical experts and engineers are nearly unanimous that the pipelines were attacked by a planned powerful underwater explosion of a highly complex nature.

Such industrial sabotage will impact millions of people, raise prices and seriously undermine Germany and other EU countries’ industrial capacity. 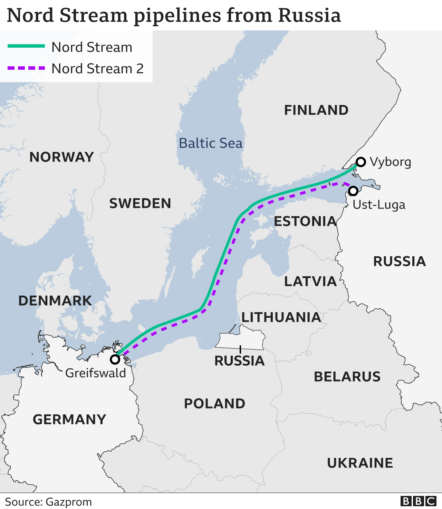 German officials fear that both Nord Stream pipelines could be permanently unusable, depending on the amount of salt water that has entered and corroded their insides, the newspaper Tages Spiegel explained. Others predict months to years to repair.

And the ruptures further threaten the global climate. These pipeline leaks are the largest single release of methane — a powerful climate-damaging, greenhouse gas — ever recorded, the United Nations Environment Program said.

The gas pipelines, each four feet wide, consist of concrete-coated, reinforced steel pipes laid on the seabed. They are designed to last 50 years under harsh conditions and very high operating pressures and to withstand sabotage, earthquakes, landslides and other disruptions. The seas are full of sensors and monitors.

In an insurance investigation or a crime novel, the first question the investigator should ask is a centuries-old Latin phrase: Cui bono; or who benefits? Look first to those who stand to gain from a crime and who has a motive for committing that crime.

Even though the pipelines were a joint Russian-German effort costing $23 billion, Ukrainian and U.S. politicians and media immediately blamed Russia for the destruction. That this charge is ridiculous is only obscured by the last decades of fever-pitch propaganda slandering Russia and Vladimir Putin.

The continued delivery of gas to the EU was Russia’s most valuable bargaining chip for resolving the war in Ukraine, ending sanctions and arriving at a negotiated agreement. Russia is the world’s largest exporter of gas and oil. While new markets opened, with many countries in the Global South buying Russia’s energy products, Russia’s largest market remains in Europe. Russia has no motive to destroy its own valuable, long-term assets.

However, any investigation controlled by NATO member countries is likely to find only Russia guilty.

On the other hand, U.S. imperialism can benefit from this crime, and the U.S. military has the equipment and access to the pipelines. Washington has both motive and means.

This widespread conclusion that the destruction of the pipelines was planned by the U.S. was captured by pro-NATO former Polish Foreign Minister Radek Sikorsky, who tweeted immediately after the explosions: “Thank you, USA.”

Both the Trump and the Biden administrations have publicly and in the strongest terms opposed these gas pipelines from their inception, because they integrate the economy of Russia and the European Union.

Demonstrations in Germany, calling for the Nord Stream 2 pipeline to be opened and sanctions lifted before winter, have had growing mass support, as well as reflecting German industrial interests.

Nord Stream 1 had accounted for 40% of the European Union’s gas supplies via Germany, keeping energy costs low in the EU’s largest economy, for the last 10 years. Nord Stream 2 was due to double export capacities to 110 billion cubic meters.

The project began in 1998 with seabed studies and complex financing and technical expertise, involving many European countries. Nord Stream 1 opened November 2011; Nord Stream 2 was due to open February 2022.

U.S. Ambassador to the EU Gordon Sondland warned on Nov. 13, 2018, that then-President Donald Trump had many ways to stop Nord Stream 2: “We have not deployed the full set of tools yet that could significantly undermine if not outright stop the project.” (Reuters, Nov. 13, 2018)

And U.S. Ambassador to Germany Richard Grenell sent openly threatening letters to German companies working on the Nord Stream 2 pipeline. Grenell reportedly warned: “We emphasize that companies involved in Russian energy exports are taking part in something that could prompt a significant risk of sanctions.” (Bild am Sonntag, Jan 13, 2019)

Germany is a member of the NATO military alliance, and it is the country with the strongest economy in the EU. For U.S. imperialism to openly threaten its German imperialist ally with economic sanctions was a brazenly aggressive act.

President Joe Biden repeated these open threats, even as German Chancellor Olaf Scholz stood by his side during a February 2022 state visit. At a White House press conference, Biden boasted that the U.S. was “able” to shut down Nord Stream 2 in the Baltic Sea if Russia invaded Ukraine.

As shown on a Feb. 7 video that was reposted on Twitter, a reporter asked Biden, “But how will you do that, exactly, since . . . the project is in Germany’s control?” Biden said, “I promise you; we will be able to do that.”

Last winter Washington promised that the hundreds of economic sanctions imposed on Russia would lead to hyperinflation, shortages and massive unemployment, and this would lead to regime change. This stated goal never happened.

The Russian economy is self-sufficient in grain, energy and other essential products, and it has access to global markets. China and the whole Global South in Africa, Latin America and Asia have refused to comply with U.S.- and European-imposed sanctions on Russia.

Washington understood that only by prolonging the war in Ukraine could the sanctions on Russia last. Thus, billions in weapons and growing numbers of trainers, advisors and contractors have continued to pour in.

The corporate media in Germany and throughout the EU reported that U.S. opposition to the pipelines was rooted in U.S-based companies anxious to sell liquid natural gas (LNG) obtained from fracking to EU countries. LNG is far more expensive than Russian gas.

Numerous social media posts have pointed to the highly suspicious role of U.S. naval operations in the immediate area of the explosions. The Baltic Sea is controlled by NATO.

The BALTOPS 22, a Naval Strike Force Exercise, held 13 days of naval maneuvers in the area of the pipelines, with 47 ships, 89 aircraft and 7,000 personnel, in June, joined by 16 NATO-allied nations. The exercises centered on exercises in new technology, including submarine and mining and demining operations.

The U.S. 6th Fleet, led by the USS Kearsarge, coordinated BALTOPS 22. The Kearsarge remained in the immediate area for months after BALTOPS 22 ended. The USS Kearsarge tested special drone underwater-vehicle, mine-hunting technology in the Baltic Sea, just off the coast of Danish island of Bornholm, near the Nord Stream pipelines. (seapowermagazine.org, June 14)

Investigative journalist Diana Johnstone examined the political significance of the sabotage and how a major state actor could carry out a naval operation in the middle of a densely monitored area, full of countless sensors and monitors. The presence of the USS Kearsarge until just days before the explosions is highly suspicious. Modern explosive devices can be detonated remotely.

Johnstone points out: “By an odd coincidence, only a few hours after the sabotage of Nord Stream 1 and 2, ceremonies began opening the new Baltic Pipe carrying gas from Norway to Denmark and Poland.”

The most ominous result of the destruction of the Nord Stream pipelines was that until the explosion, the pipelines remained ready for use as soon as an agreement was reached on Ukraine. But now, Johnstone writes, “The sabotage has virtually announced that the war can only intensify with no end in sight.” (tinyurl.com/2632bwdw)

In the U.S., endless funds to continue the war mean escalating inflation and economic insecurity for millions of working people and the growing danger of wider war.