Dramatic images and accounts of the devastation wreaked by Hurricane Ian continue to dominate the news. The death toll, approaching 100 as of this writing, is expected to rise. Over a million are still without electric power in Florida, hundreds of thousands without water. Homes were leveled, and roads and bridges washed away. And other horrors too numerous to list.

Lives have been turned upside down by a monster hurricane, one of the most powerful on record, with a diameter spanning the entire width of the Florida peninsula.

In the big business media, stories of damaged yachts and summer condos seem to outnumber reports on the storm’s disproportionate impact on low-income, working-class people, especially people of color. But the reality can’t be hidden: Large numbers of low-income homeowners and renters — who could not afford insurance or are scrambling to find funds for deductibles required to file an insurance claim — are now homeless.

The class divide under capitalism reveals itself most brutally every time a so-called “natural disaster” is suddenly transformed into an economic disaster for the working class.

These crises expose the fact that the prime purpose of the capitalist state is not helping people in need. Just consider the number of deaths in Lee County, which includes Fort Myers, that might have been prevented if the evacuation had been better organized. Responsibility for the poor timing lies with Florida Gov. Ron DeSantis and Lee County officials.

Even after the mandatory evacuation orders were issued, Lee County Sheriff Carmine Merceno refused to evacuate the 457-bed county jail, leaving prisoners in harm’s way. Across the state only 2,500 or so prisoners, out of 81,000, were evacuated. (Democracy Now, Sept. 29)

Because the situation is so dire, Gov. DeSantis has had to put his ultraright ideology aside and request federal assistance. Whatever the federal government provides, it may be more than what people in Puerto Rico get after the devastating impact of Hurricane Fiona — given the history of U.S. colonial domination there.

Prior to reaching Florida, Hurricane Ian landed in Western Cuba. Cuba was prepared: People were evacuated; shelters were constructed, and schools were closed ahead of time.

Socialist Cuba is known worldwide for its hurricane preparedness and responses designed to minimize the cost to humans and animals. Since 1985, “the “Ejercicio Meteoro” (Meteoro Exercise) held each year is an example of the resolve of the Cuban government to implement measures to protect, as far as possible, people’s lives, property and the resources of the national economy from disaster situations and has become a key factor in national efforts in this field over the last three decades.” (Granma, May 4, 2016)

The storm knocked out the power grid for the entire island. Immediately work brigades began to restore power to residents, prioritizing areas around hospitals along with supermarkets and food processing facilities — in order to replace food that had to be thrown out during the power outage.

Typically, the New York Times focused on protests over the speed of the process, but this capitalist mouthpiece had to admit the demonstrations were “small.” The Times can’t hide the obvious contrast between hurricane responses in socialist Cuba and the capitalist U.S. 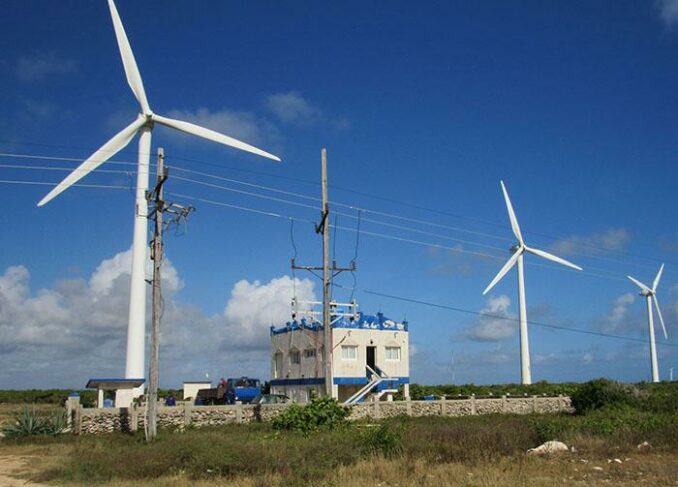 This and another wind farm in Cuba have enabled the country to reduce fossil fuel consumption by 53,000 tons. Credit: Granma

Why the disparity? The two countries have two different social systems. The U.S. is the most powerful imperialist country in the world — and the profit motive is what led it to become so. In fact the profit motive drives the overreliance on fossil fuels, which led to the climate catastrophe that is causing more frequent and more severe weather disasters.

Cuba is a socialist country, where human needs not profits are the priority, despite the inhumane U.S. blockade in place since 1961. Cuba’s socialist priorities make all the difference in the world. As Alejandra Garcia wrote in Resumen Latinoamericano Sept. 30, “Cubans show that no matter how hard the circumstances are, solidarity, hope and the will to overcome the impossible remain intact.”

For humanity and for the planet, socialism is the only way forward.