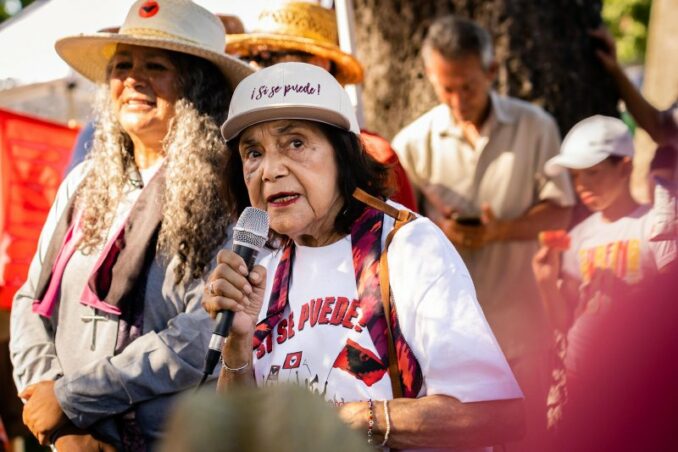 Despite a farmworkers’ 24-hour vigil going on in Sacramento, California, Gov. Gavin Newsom is still stalling on signing Assembly Bill 2183, passed in May — a pro-farmworker bill that is also pro-union. Instead of an eye on justice, he seems to have his eye on a run for the U.S. presidency.

The Agricultural Labor Relations Voting Choice Act would make it easier for farmworkers to vote in union elections, by mail or card check as well as in-person. It would prohibit growers from encouraging or discouraging union membership. Newsom must sign the bill by Sept. 30, or it will expire.

It’s no surprise that farmers who hire farmworkers and local business “chambers of commerce” vehemently oppose the bill. Growers could face fines of between $10,000 to $25,000 for certain labor rights violations under Bill 2183.

But the bill was strongly backed in the California General Assembly — and was even endorsed in a Sept. 4 White House statement by President Joe Biden.

More importantly, there has been overwhelming popular and union backing of this bill, led militantly by the United Farm Workers (UFW) themselves.

On Aug. 3 workers and supporters started from Delano in the Central Valley on a marching journey that paralleled the one led by UFW co-founder Cesar Chavez in 1966, during the very first unionization drive by California farmworkers.

This time, on foot, in triple-digit heat, they journeyed for 335 miles in 24 days to the state capital on Aug. 26. They were greeted along the way by cheering schoolchildren, and they had their blisters and swollen knees treated by University of California-Davis medical students. Food vendors provided sopas, tacos and other food.

On Aug. 20 they were cheered on by union icon Dolores Huerta, co-founder of the United Farm Workers, who spoke to them in Stockton. Huerta coined the stirring motto chanted now at all progressive marches: “Sí, se puede! Yes, we can!”

Farmworkers have been historically excluded from federal labor protections, such as the 1935 National Labor Relations Act, which was passed in a racist deal with Southern legislators intent on denying labor rights to Black farmworkers and domestic workers.

Some states are trying to correct this injustice through legislative initiatives. Through leadership by the Workers Center of Central New York, based in Syracuse, the New York State Assembly passed the Farmworker Fair Labor Practices Act in 2019. Going into effect in January 2020, the law extended many new protections to farmworkers, including the right to a day of rest, overtime pay and collective bargaining rights.

Farmworkers in California are committed to fighting for basic worker rights, including the right to an easily accessed, fair and free union election, without intimidation from their bosses. They were determined because they know: “Sí, se puede!” (ufw.org/caagvotingchoiceact2022/)