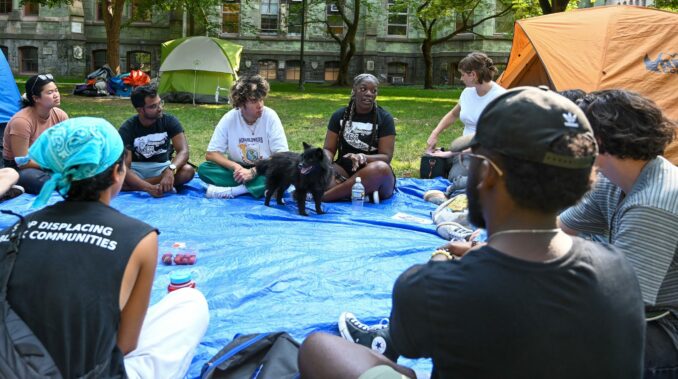 After over a year of meetings, numerous street protests, a 31-day protest encampment, surprise visits to developers’ offices and crashing a cocktail fundraiser, resident organizers have updated their demands. The Save the UC Townhomes now calls on Mayor Jim Kenny and other city and state officials, University of Pennsylvania and Drexel University leaders and real estate executives to not only stop any evictions of the 70 resident families of 400 people. They want a commitment to a process to preserve the UC Townhomes and to further commit resources to the acquisition of the property.

In a reactionary response, UPenn President Liz Magill retaliated with disciplinary hearings for students who were involved in disrupting her speech. Organizers point out that if Magill hadn’t dismissed residents’ requests to speak to her, there would never have been a disruption.

Despite MaGill’s displeasure, Fossil Free Penn, a student activism group, is demanding Penn divest its endowment from the fossil fuel industry and reinvest in the Philadelphia community and clean-energy companies and projects. They held a teach-in Sept. 16 on the struggle of UC Townhomes residents to stop their evictions. Students held the event at a tent city on campus, which they erected Sept. 14 as part of a global End Fossil Now movement occupying schools and universities around the world.

On Sept. 18, Rev. Dr. William J. Barber II, North Carolina architect of the Moral Monday movement and co-chair of the national Poor People’s Campaign, spoke at a UC Townhomes rally of residents, activists and clergy. “You’re a hypocrite if you’re a politician participating in throwing people out of their homes. You’re a hypocrite if you say you’re a developer, and you want to tear down UC Townhomes. That’s not development,” he said. 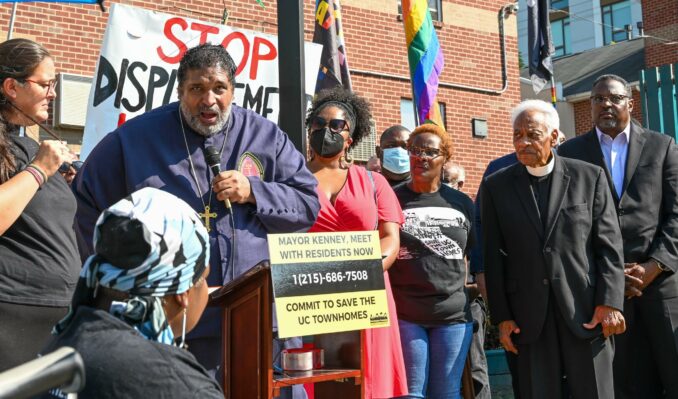 Barber volunteered to stay at UC Townhomes at a future date if that would help direct media attention to the struggle.

After several residents described why they became organizers, several clergy from the POWER Interfaith Coalition spoke. A dozen ministers and rabbis followed up by signing a letter to Mayor Kenny, which included the Townhomes demands. It asks him to meet with resident leaders to discuss how to stop their evictions and how he’s going to handle dozens of other expiring HUD housing contracts in this city.

Resident organizer Mel Hairston, one of the last speakers, brought the crowd to its feet with the words, “Housing is not only a human right, housing is OUR right!”