The Cuban people will vote in a Sept. 25 referendum on a new Family Code, which, if approved, would expand women’s and LGBT+ rights, as well as the concept of the nuclear family. Cubans living outside the country voted on Sept. 18. 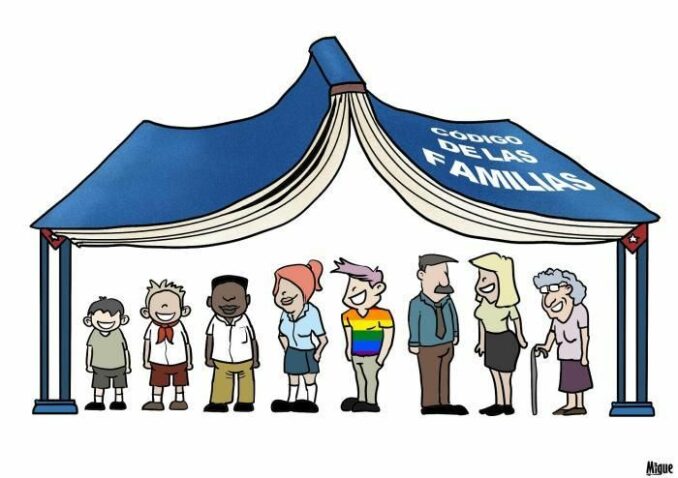 This cartoon from the Cuban newspaper Granma shows a range of people protected by the shelter of the new Family Code.

The new Code would legalize same-sex marriage, allow same-sex couples to adopt children, promote equal sharing of domestic responsibilities and extend labor rights (including pay) for those who care full-time for children, the elderly and people with disabilities. It would further confirm the right to free abortion, paid family leave and assisted and surrogate pregnancies (but not for profit), and it would fight gender-based violence and expand the rights of children and grandparents.

For example, the Code would establish the right of all Cubans to form a family, regardless of sex or gender identity, thereby recognizing all variety of family forms, including multiparental families and allowing parental rights to be shared among an extended and nontraditional family that could include grandparents, stepparents and surrogate mothers.

And while the right to reproductive choice and reproductive health is being eliminated or severely restricted in the U.S., the new Code strengthens the right to free and safe abortion in a hospital or clinic for all Cubans.

In the words of Cuban Minister of Justice Oscar Silvera Martinez, the new Code “protects human dignity . . . and eliminates any vestige of discrimination in the family sphere and rejects violence. He further explained that the Code “is for the benefit of all . . . has an inclusive, protective and equal character, does not regulate rigid or pre-established family models and allows the people to solve the conflicts that occur and exercise the rights recognized in that area, taking into account the characteristics, situations and possibilities of each person.”

The referendum is the culmination of a years-long democratic process of discussion and debate among the Cuban people to update the 1975 Code, which codified gender equality in law — a process mandated by the new Constitution that was passed in 2019. A drafting commission began working on a new Code in 2019 and in 2021 presented 22 versions to the National Assembly of People’s Power, which approved a draft to then be submitted to the people for discussion and debate.

Between February and April, nearly 6.5 million Cubans took part in more than 79,000 meetings facilitated by the Federation of Cuban Women, the Committees to Defend the Revolution (CDRs) and other community organizations to offer proposals and amendments to the proposed Code. Over 400,000 proposals were offered by the people, which were submitted to the National Assembly of People’s Power for evaluation and then returned to the people again for further discussion and proposals.

The proposed Code to be voted on this month represents the 25th draft and was unanimously approved by the National Assembly, after evaluating the thousands of proposals submitted.

Unlike in the U.S., where state after state is making it more difficult for people of color and poor and working people to vote, all Cuban citizens and residents are automatically registered to vote at age 16 and can cast a ballot in the referendum.

Bill Sacks has been an organizer and participant with the Venceremos Brigade, breaking the travel blockade to Cuba, for over 50 years.