The class struggle lost our very partisan comrade Jeanette Fusco Merrill in the 90th year of her revolutionary life in August. Jeanette was a founding member of Workers World Party, for decades a National Committee member and a member of the Steering Committee of the Buffalo branch.

During the 1950s and 1960s, Jeanette, who was born in Buffalo, took up the fight against racism in this city. Together with her spouse, comrade and life partner Ed and the rest of the comrades in the newly-formed Workers World Party, they supported the Mothers Alliance in its fight to stop racist school segregation, to end hiring discrimination at retail stores Grant’s and Woolworth’s, and against gentrification and displacement of low-income housing. 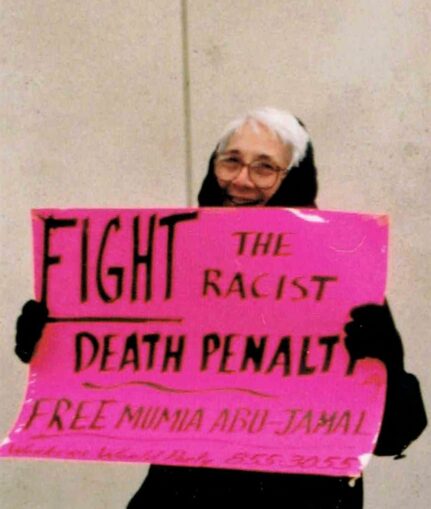 Jeannet Merrill demonstrates for U.S. political prisoner and revolutionary journalist Mumia Abu-Jamal and for an end to the death penalty.

In the early 1960s, Mae Mallory was fighting extradition from Cleveland to Monroe, North Carolina, over false kidnapping charges against her and Robert Williams. They were targeted because they supported the right of the Black community to arm and defend itself from the Ku Klux Klan. Jeanette spent many months fundraising and agitating to build support for Mae’s freedom and holding public meetings to raise money for guns for Rob Williams in North Carolina — an effort which drew attention and retaliation from the FBI.

Jeanette was a militant voice in support of liberation movements in the U.S. and around the world, beginning with the Cuban Revolution in 1959.

She was outspoken in the struggle to defend the Young Lords, the Organization of Afro-American Unity under Malcolm X and the Deacons for Defense and Justice, and to free jailed fighters in the Black Panther Party, and Martin Sostre and Geraldine Robinson. Robinson, now Geraldine Pointer, spoke at Ed Merrill’s funeral in 2005, recalling that Ed and Jeanette, representing the Martin Sostre Defense Committee, supported her and her children during the frame-up of the African American bookstore owner.

Being a target of red-baiting — the government’s tool to weaken the effectiveness of activists — became a way of life for Jeanette and the other Buffalo comrades. FBI agents visited the bosses at their workplaces and used infiltrators to plant divisive fears among them. More than once, Jeanette’s name and her communist affiliation appeared on the front page of the local paper.

Jeanette, a telephone company worker, was never afraid of a challenge. When co-workers saw her being publicly red-baited and asked, “Aren’t you a communist?” she didn’t deny it. Instead, she always explained: “If you mean, am I for free health care?” and went on to describe the proletarian vision of a better world.

Jeanette was fearless in speaking out, disrupting the House Un–American Activities Commission hearings in Buffalo in 1964. When HUAC rolled into Buffalo, not only were they greeted by 1,500 pickets, mostly students — but they were unable to hold their witch-hunt hearings without disruptions. In the end they were run out of town.

After most of the founding members of Workers World Party moved the party’s headquarters from Buffalo to New York City, Jeanette and Ed started the Buffalo branch over again. They organized meetings that inspired students on the restive campus of the University of Buffalo, injecting a class-conscious worldview of the anti-war struggle. Together they helped kindle a chapter of the militant Youth Against War and Fascism. Many youths soon joined the Buffalo branch of Workers World Party.

Jeanette never paused in teaching revolutionary Marxism-Leninism by example, and the new members quickly grasped that their work in the anti-war movement was to build a direct connection to the ongoing war against the Black community and to defend the right of the Vietnamese people to make their own decisions about the war, negotiations and demands.

Jeanette was able to develop the youth as leaders of the anti-war work in the party and taught a working-class perspective for everything we did, so the students could then bring a wider perspective back to building the movement on campus.

Longtime Workers World Party member Mary Owen, originally in the Buffalo branch, told this writer: “The one memory that stands out to me was from the first meeting of YAWF Women that you and I attended. I was a young student and going from meeting to meeting where everyone else was the same age as me. So what could they really know about organizing? But I was very impressed by Jeanette at the YAWF Women meeting — she was older, worked at the phone company, was a shop steward and had such great radical politics. I remember thinking, now here is a serious organization with roots in the working class — and all because of Jeanette’s presence at that event.”

While she was the mother of a young child, holding down a full-time job and caring for her own mother as well, Jeanette taught by example what it means to be a full-time, passionate, committed revolutionary. She was able, from years in the struggle, to explain what partisan, working-class, critical support for the Soviet Union was all about.

Women comrades were able to grow as leaders with Jeanette’s guidance and to bring an understanding of class to the 1970s women’s movement.

Jeanette’s strong class-conscious perspective on oppression was what drew students and workers alike into action with Workers World Party on such issues as prisons, food and utility prices, Native rights, LGBTQ+ rights, Palestine and so much more. She knew how to organize, and we learned!

When the Prisoners Solidarity Committee of YAWF was called upon by the Attica prisoners during the September 1971 rebellion to send in an observer, Jeanette accompanied our comrade Tom Soto, who went inside while the rest of the Buffalo branch was outside the walls with the families of the prisoners — cops and troopers aiming their rifles at us, before they began the assault and massacre.

When Workers World Party was building for the 1974 national march against racism in Boston, Jeanette stood on a bench with a bullhorn in downtown Buffalo at lunchtime, raising money for buses to go to Boston.

Jeanette’s imagination for outrageous but incredibly effective action led Buffalo’s chapter of Women United for Action to hold our first huge rummage sale, to enable us to fund community-based free distributions of apples and potatoes that local farmers would otherwise have destroyed. These rummage sales and food distributions were accompanied by mass distributions of literature decrying capitalism’s failed system of profit before people’s needs.

And while she was never shy about speaking out at public meetings and encouraging comrades to learn to do it too, Jeanette stressed the importance of doing the unseen and unheralded work, the dishes and repairs and sweeping, and of selflessness and sacrifice. Although her health kept her from activism in recent years, Jeanette will always be an example and an inspiration for those of us who experienced firsthand her fiercely working-class passion, compassion, courage, pride and strength as a revolutionary woman leader.