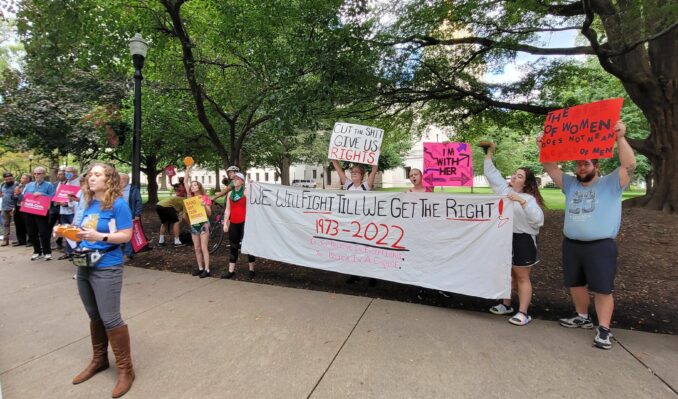 Anti-choice State Senators wanted to pass HB 302 with limited exceptions, but ultrarightist sponsors of the bill in the House of Delegates wanted a complete ban, without any exemptions.

With the help of anti-choice Democrats and “moderate” Republicans, the two chambers passed an amended HB 302 with exceptions in the case of rape, incest and/or if one’s life is at risk — but all requiring arbitrary qualifications that must be preapproved. Governor Jim Justice — an openly anti-choice chauvinist — stated he would gladly sign the bill and did so Sept. 16.

The bigoted, corporate-funded House speaker, Roger Hanshaw, announced a “legislative cookout” at the governor’s mansion near the state capitol building for Sept. 12, the day before the vote. Activists from the Women’s Health Center in West Virginia, Planned Parenthood, ACLU-WV and WV Free organized a protest, suitably called “Picket the Picnic.”

More than 200 protesters showed up with signs and shouted down the legislators who attended the posh event. Picketers chanted,“1, 2, 3, 4! Abortion is worth fighting for! 5, 6, 7, 8! Separate the church and state!” and “‘Pro-life,’ that’s a lie, you don’t care if people die.” Organizers passed out noisemaker bullhorns and tambourines.

Hundreds of protesters packed the capitol building Sept. 13, the day the bill passed. The mood of the angry crowd was much more militant; and as the legislature shamefully hustled their bigoted bill, protesters made a lot of noise. After the bill passed, police randomly arrested one pro-choice picketer. When other protesters asked why, the police responded with threats of further arrests.

The need to continue the fight

The solution being pushed for some who passionately picketed the backward legislature is to focus energy on the elections in November. Many others in the crowd, on the other hand, clearly feel disillusioned with the fact that a couple of the Democrats voted for the bill.

As one protester, Dani, told Workers World: “We can say ‘wait until November’ all we want, but the attack is happening now. And Democrats in D.C. are doing nothing! They have had plenty of time to codify abortion and protect us, but they have failed to do it. Capitalist politicians have gone unchecked for far too long, and they are too comfortable in their efforts to oppress us, so we need to continue to organize and make them afraid of us.”

The far right is currently mobilizing their forces through various venues, so it is crucial that working and oppressed people organize “Workers Assemblies” to collectively counter their attacks on abortion rights, which amount to fascistic coercions. Workers Assemblies can bring people into the labor movement who have traditionally felt excluded, and they can also help educate people as to why socialism is the only alternative to the vicious system of capitalism.

Due to the sexist and anti-working-class rhetoric of the ultrarightist legislators who want a complete abortion ban, many people in West Virginia fear that they will try to chip away at the few stipulations that exist in the recently passed bill to permit abortion with strict limitations.

Collective action, along with the revolutionary science of Marxism-Leninism, is the strongest form of resistance to the brutal onslaught against reproductive rights.