“In the factory we have a lifeless mechanism,” Karl Marx wrote in “Capital,” whereby the worker “becomes its mere living appendage.”

Although the monumental work was first published in 1867, Marx’s words speak to the condition of many workers today — and not only to factory workers. Across all sectors of the economy, bosses have introduced new, ultrahigh-tech surveillance tools. “Algorithmic management,” the subject of a number of recent articles and studies, subjects workers to a new form of dehumanization that has drawn comparisons to the early 20th century’s “scientific management.”

As David Ovetz writes in the September/October issue of “Dollars and Sense”: “This latest use of technology as a strategy to control and manage workers is based on the use of algorithms, mathematical programs that use data to solve problems and make decisions. Rather than use human observers to collect and interpret the data, as industrial engineer Frederick Taylor did in the late 19th to early 20th centuries, algorithms do it automatically, thanks to computer processing. . . .

“Such tools rely on the recent acceleration of computer processing speed and increased data storage to use algorithms to surveil, collect and process data about worker productivity, a process often used interchangeably with ‘artificial intelligence,’ or AI. Algorithms directly assess and evaluate workers’ performance to provide real-time directions with little-to-no human intervention.” 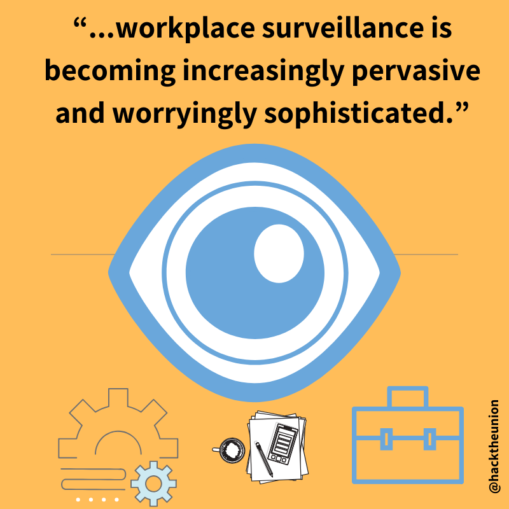 Quote in graphic is from an anonymous worker. Credit: Hack the Union

Amazon and fast-food workers are among the superexploited workers forced to work with a monitoring device, worn on their body, that tracks their every movement and notes any and all “time off task.” Uber and Lyft drivers have similar monitors in their vehicles.

Since the COVID-19 pandemic, company-issued computers have been used to surveil other workers who work from home — but companies are keeping the technology in place as workers return to the office.

Not only productivity is monitored. Algorithms observe workers’ facial expression and tone of voice. Workers who look or sound less than cheerful over the phone can accrue negative points that can lead to discipline.

Surveillance has even entered the caregiving professions. The Aug. 14 New York Times reported that counselors, social workers and hospice chaplains are being electronically monitored for how much time they spend with each patient. Two years ago Rev. Margo Richardson’s employer “started requiring chaplains to accrue more of what it called ‘productivity points.’ A visit to the dying: as little as one point. Participating in a funeral: one and three-quarters points. A phone call to grieving relatives: one-quarter point.”

The practice has racist implications. A study this year by the Washington Center for Economic Growth states: “Modern workplace surveillance in the United States is rooted in a historic distrust of workers, particularly low-wage workers, with racist foundations in slavery and following exploitative labor practices. In ‘Dark Matters: On the Surveillance of Blackness,’ for instance, sociologist Simone Brown of the University of Texas at Austin traces the surveillance, measuring and marking of enslaved Black people in the United States through to present-day technologies of surveillance and biometrics classifications.”

Frederick Winslow Taylor published “The principles of scientific management” in 1909. Following his “principles,” time-study engineers observed workers, monitoring their production speed with a stopwatch, or photographed and filmed workers to assess how they could produce more products in the same amount of time. Workers were ordered to eliminate “superfluous” movements and work more intensely.

Henry Ford enthusiastically implemented Taylorism around the same time that he introduced the assembly line to automobile manufacturing.

Time studies were still being conducted when this writer took a job in the auto industry in 1987. The data accumulated was then weaponized against the workforce by imposing higher production quotas — with no additional pay, of course. These old methods of exploitation were still being employed even as robotic technology was slashing the number of workers needed to build vehicles.

But now even the hated time-study manager has been replaced by electronic monitoring of worker movement. Management jobs are being cut in favor of cyber-bosses. Workers can literally be disciplined and fired algorithmically, without any human being involved in the process. Sometimes, they don’t even know they are being surveilled.

Through oppressive cyber-spying workers are given a not-too-subtle message: Work harder and faster or be fired! This is the most modern form of what Marx, in “Capital,” called “increasing intensity of labor” — making the working class work more intensely for the same wage.

The goal is to produce more “surplus value.” In a given workday, in a certain number of hours, a worker produces enough value to cover the cost of wages and benefits. However, the worker has to keep working beyond that time, producing a “surplus” above what the worker needs to survive. This surplus labor time doesn’t cost the capitalist one penny; the capitalist pockets the surplus in the form of profits.

Surplus value goes up in direct proportion to the degree that the labor process can be intensified.

Marx identified another way to increase surplus value as “increasing the productiveness of labor.” Then, as now, new technology was used to reduce the number of workers needed to do the same work. This process, in tandem with the intensification of labor, continues today with the most modern, demeaning, job-slaying technology imaginable.

But the drive for profit is producing the force to counter it: a young, class-conscious and militant working class that is determined to win union representation at Starbucks, Amazon and numerous other big capitalist chains. As history demonstrates, workers need united action – through unions – to set limits on speedups, including the new cyber-speedups.

Ultimately, to end the dehumanization that defines work and life under a system based on exploitation of one class by another, the working class must fulfill its historic role as the gravedigger of capitalism.