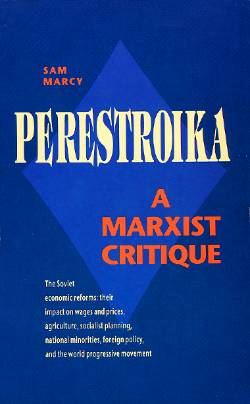 When the last Secretary General of the ruling Communist Party of the Soviet Union, Mikhail Gorbachev, died Aug. 30, the rulers of the imperialist world powers made it clear that they considered him their hero. That praise could only take place if his historic role was to facilitate the dismantling of the first workers’ state. The Soviet state represented a threat to the imperialists’ ability to exploit the workers in the imperialist countries and the peoples of oppressed nations all over the world that are superexploited by world imperialism.

If they celebrate his role in history, it is only because his leadership of a grouping inside the Soviet Union and inside the CPSU facilitated the USSR’s collapse and in turn facilitated the imperialists’ ability to exploit the majority of humanity.

When Gorbachev, who became the leader of the USSR in 1985, first presented his program of Perestroika and Glasnost, there was confusion in the world movement as to what this would lead to. Workers World Party’s Chairperson Sam Marcy evaluated Gorbachev’s program in real time.

Articles which Marcy wrote from 1985 to 1990 were gathered and published in his book, “Perestroika: A Marxist Critique,” which examined critically both the words of Gorbachev and the negative developments within the Soviet Union during that period, as they occurred. Anyone who wants to understand the role of the USSR in the history of the 20th century would benefit from reading Marcy’s “Perestroika,” available online at workers.org/books/, along with “Soviet Socialism: Utopian or Scientific,” which analyzed the USSR after its dissolution.

The following are excerpts, with our subtitles, from an early chapter of “Perestroika,” “Gorbachev’s World View,” that critiques the talk Gorbachev made at the United Nations in December 1988, revealing the bourgeois ideology expressed by someone who was supposedly a Marxist leader. We publish this selection with the confidence that it will attract a new generation of working-class readers — to learn from history and develop a new and successful communist leadership that can help bring humanity through the next series of capitalist crises to a better, socialist world.

On Dec. 7, 1988, Mikhail Gorbachev delivered a speech to the United Nations General Assembly in New York which demonstrated that perestroika was central to his world view. . . .

Gorbachev took the occasion to make a speech that raised many international issues and a number of important proposals dealing with armaments and weapons systems. . . .

However, Gorbachev did not confine himself to such matters. He threw in a virtual renunciation of the world class struggle, of Marxism’s principal tenets and world conceptions. He took it on himself to present a sociological thesis on world history and social developments that proposed to answer the question: “What will mankind be like when it enters the 21st century?”

His answer projected a fantastic new world order which would have been fitting for a bourgeois liberal from one of the capitalist countries but was altogether out of place and contrary to what a communist leader ought to say in such a situation. Nor had this new world historic view been approved first by any conference or congress of the Soviet Communist Party.

We cannot repeat [Gorbachev’s whole Dec. 7] speech here but will quote especially from those sections dealing with “universal human values”:

“Today, we have entered an era when progress will be shaped by universal human interests. . . . The awareness of this dictates that world politics, too, should be guided by the primacy of universal human values. . . .

“The history of past centuries and millennia was a history of wars that raged almost everywhere, of frequent desperate battles to the point of mutual annihilation. They grew out of clashes of social and political interests, national enmity, ideological or religious incompatibility. . . . And even today many would want these vestiges of the past to be accepted as immutable law. . . .

“But concurrently with wars, animosities and divisions among peoples and countries, another trend with equally objective causes was gaining momentum — the process of the emergence of a mutually interrelated and integral world. . . . Today, further world progress is only possible through a search for universal human consensus as we move forward to a new world order . . .

“We are, of course, far from claiming to be in possession of the ultimate truth. But, on the basis of a thorough analysis of the past and newly emerging realities, we have concluded that it is on those lines that we should jointly seek the way leading to the supremacy of the universal human idea over the endless multitude of centrifugal forces, the way to preserve the vitality of this civilization, possibly the only one in the entire Universe.” [Emphasis in Gorbachev’s original speech]

Where is this true now?

Where is it true that we are entering an era in which world politics are shaped by universal human interests? Can this be seen in the attitude of the U.S. toward Nicaragua, Cuba, Haiti, Afghanistan, South Africa, the Philippines, the Middle East? Of course, the extreme right in the bourgeois camp interpret this view as nothing more than a communist trick. The more moderate among the bourgeoisie, while they welcome Gorbachev’s renunciation of the class struggle, as they would say “at least on paper,” are nevertheless giving up not one inch in the struggle, except insofar as some military reductions may be mutually advantageous.

Nor have Reagan, Bush, Thatcher, Mitterrand or other imperialist leaders responded to this speech with any concessions on bourgeois ideology and their world view.

Each class has its own point of view

There is not today and never has been any consensus on what universal human interests are. Each class and each social grouping evaluates human interests from its own point of view. If Gorbachev knows of classes and groups which have surrendered their interests in deference to universal human values, it would be very illuminating to learn of them. . . .

[Referring to Gorbachev’s statement] it is difficult to find a historical summary anywhere, even in bourgeois texts, which so completely disregards the opening sentence of Part I of the Communist Manifesto: “The history of all hitherto existing society is the history of class struggles.”

What Marx did was to show the motive force behind these struggles. The springboard for them all was class antagonism, the class struggle of the exploiters and oppressors on one side and the oppressed on the other. Nobody has put it better than did Marx and Engels in the Communist Manifesto: “Freeman and slave, patrician and plebeian, lord and serf, guild-master and journeyman, in a word, oppressor and oppressed, stood in constant opposition to one another, carried on an uninterrupted, now hidden, now open fight, a fight that each time ended, either in a revolutionary reconstitution of society at large or in the common ruin of the contending classes.”

According to Gorbachev, these struggles are not class struggles at all. If they are, he didn’t mention it. He said they “grew out of clashes of social and political interests, national enmity, ideological or religious incompatibility.” But all of Marxism teaches that national enmity, ideological and religious incompatibility are merely manifestations of class interests and not the other way around. All these clashes, including imperialist wars, grow out of contradictory class interests, out of the division of society into antagonistic classes and into oppressing imperialist nations versus oppressed peoples. . . .

But it [Gorbachev’s thesis] must be dealt with now, if only because the views represented in this thesis come from the head of the Soviet Union, where Marxism is a state doctrine, and hence what he says is regarded as a representation of Marxism. It would be altogether different if one could say, well, this is just a diplomatic maneuver to conciliate the imperialist bourgeoisie. However, they show no inclination whatever to be conciliated by any kind of political document.

Indeed, virtually at the same time that Gorbachev was in New York for this speech, the U.S. government unveiled the Stealth bomber. Shortly thereafter Reagan dispatched a naval armada to the Mediterranean, opened an offensive naval action against Libya and shot down two of its reconnaissance planes.

Gorbachev spoke of “the emergence of a mutually interrelated and integral world.” This is a bourgeois cliche which has been repeated over and over but does more to confuse than to enlighten about trends in the contemporary world. There is no question that spectacular advances in electronics, aerospace and countless other developments have demonstrated that the scientific and technological revolution is of a global character. . . .

However, this has not alleviated or diminished the class character of the [global] village, the existence of rich and poor, of boss and worker, landlord and peasant, exploiter and exploited.

Does the scientific-technological revolution soften and moderate the class struggle? Or does it in reality aggravate it? Does it not in fact accentuate the limitless, predatory search for higher and higher profits?

Hasn’t the scientific-technological revolution, this so-called new interdependence of an integral world, resulted in impoverishing the greater portion of humanity, while enriching the most powerful, predatory multinational corporations? Haven’t the last two decades proven conclusively that the entire technological and scientific apparatus is mostly at the service of the military-industrial complex, that whatever integration, whatever interdependence has occurred has made the poorer countries not less but more dependent upon the rich imperialist ones?

Gorbachev confuses sociology with technology, making it appear that one invalidates the other. This has been a favorite theme of liberal bourgeois theoreticians over the years, that technological progress on a world scale and the mutually interrelated processes in both systems make for their integration into a world system, a system where world socialism is happily liquidated into the bourgeois system! . . .

Nine-tenths of his thesis is calculated to frighten the working class with the spectre of nuclear war. But it hasn’t at all frightened the imperialist bourgeoisie, who have used this period to rearm and modernize their industry, especially the military-industrial complex. For all the tremendous antinuclear conferences with their prestigious scientific personnel, they never seem to frighten the military-industrial complex. Whatever their subjective aim, their result is to frighten the working class and oppressed people into making concessions, while the bourgeoisie make none. . . .

Will the new thesis soften the U.S. up in trade negotiations? Or will the bourgeoisie make the most of the difficulties in the USSR? . . .