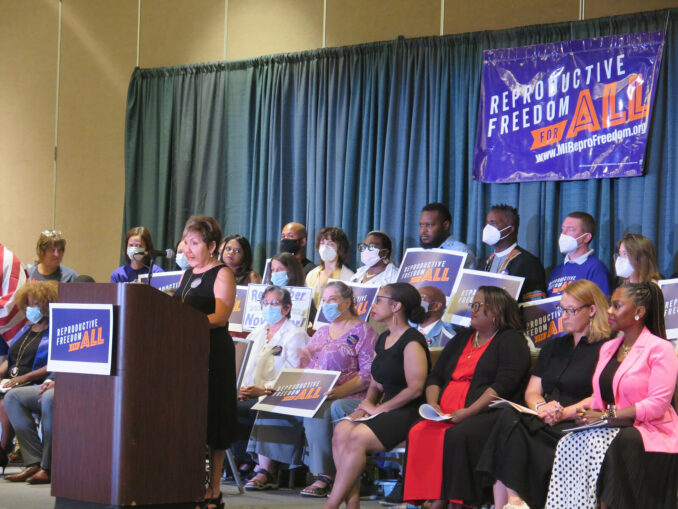 Supporters of Michigan Reproductive Freedom for All petition after submitting over 753,000 signatures, Lansing, Michigan, July 11.

The ruling by the U.S. Supreme Court overturning Roe v. Wade was undeniably a gigantic setback for reproductive justice. It has already caused tremendous harm across the country.

Nevertheless, the fight for abortion access is far from over, with activists pushing back creatively, courageously and with fierce determination. That tremendous energy has put an initiative on the Michigan ballot to enshrine the right to access abortion in the state constitution.

Michigan law requires over 425,000 valid voter signatures to place an initiative on the ballot. Reproductive Freedom for All collected well over the legal minimum in a short period of time, submitting petitions with 753,288 signatures in July. The issue is urgent, as state courts are currently considering whether to reimpose a 1931 law banning all abortions except to save the life of the pregnant person; under that 90-year-old law, doctors who perform abortions could be sentenced to up to 15 years in prison.

Reproductive Freedom for All, a partnership of Planned Parenthood Advocates of Michigan, ACLU of Michigan and Michigan Voices, explains: “This proposal will affirm that every Michigander has the fundamental right to reproductive freedom, which involves the right to make and carry out decisions without political interference about all matters relating to pregnancy, including birth control, abortion, prenatal care and childbirth.” (mireproductivefreedom.org) The army of petitioners collected more names than on any ballot initiative in Michigan’s entire history.

The Michigan Bureau of Elections ruled against efforts by a right-wing misogynist group to keep the initiative off the ballot over a printing error, which omitted some spaces between words on the petition.

This makes Michigan the fourth state where voters will decide in November whether to protect or deny reproductive justice. Progressive initiatives are on the ballot in Vermont and California, while Kentucky voters will vote on a right-wing anti-abortion proposal similar to what Kansas voters resoundingly defeated Aug. 2. More states are expected to vote on the issue in 2023.

Whether through mobilizing mass protests, the arduous task of filing petitions or the dangerous work of building networks to help women, girls and pregnant people travel to states where abortion is legal, the reproductive justice movement is determined to secure the basic right to bodily autonomy by any means necessary.