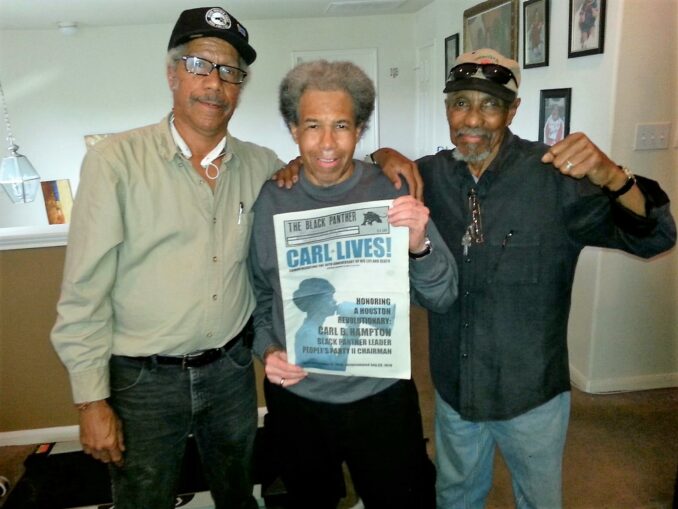 John “Bunchy ‘” Crear joined Peoples Party 2 in Houston in June 1971. He went to Oakland, California, with Charles Freeman and Johnny Coward in August 1971 to ask for Houston to officially be made a chapter of the Black Panther Party. He transferred to the Panthers headquarters in Oakland in 1972 and was head of photography for their newspaper. In 1974 he became Bobby Seale’s assistant.

In 1977 he started the Las Vegas chapter of the BPP. He was in the BPP for 10 years. Bunchy is now the Houston chair of the Black Panther Party Alumni Association. He kept in close contact with political prisoner Albert Woodfox when he lived in Houston with his brother and after he moved back to New Orleans. The following is a tribute to Woodfox, who died Aug. 4, 2022.

When I think about my comrade Albert Woodfox, I think about the humanity of the man. When my comrade Warren Nelson (“D.K.”) and I were on the way to meet Albert after his release from prison, I was wondering what kind of person I was going to meet after spending all that time in prison. Was he going to be an angry, raging man? When he opened the door, we were greeted with the biggest smile and a warm greeting.

We sat and talked for over an hour; it was like we were longtime friends. Over the next year, we spent a lot of time together, I took him to the Shape Youth Center. He was greeted by 30 kids ranging in ages from 6 to 12, eager to hear his story. When we left he said that it was the best time he had since he got out of prison, because Albert was on a mission to continue to educate and be a voice in our continuing struggle.

He traveled the world to speak of the injustice of the criminal justice system. All the way to the end, when he had trouble breathing, he wanted to come to Houston for the 52nd anniversary of the assassination of Carl Hampton.

He called me a week before and said he thought he would get better — to not cancel and give him until Sunday. He called and said he wasn’t getting better. He was soon back in hospital. As I was getting reports from his brother on his condition, I could not help from tearing up. We lost a warrior who loved humanity and stood strong till the end.