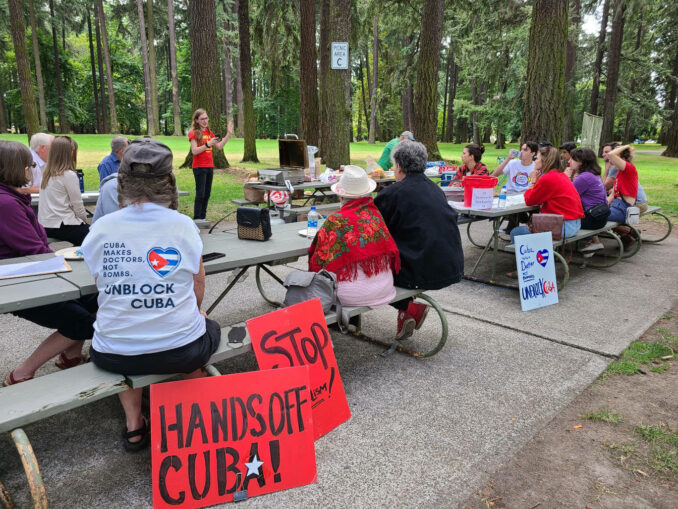 An Aug. 28 picnic organized by the Portland End the Blockade of Cuba Committee featured speakers, including this writer, who have just returned from Cuba as members of the Pastors for Peace Caravan.

The speakers talked about the successes they witnessed in Cuba in areas of medicine, disaster preparedness and participatory democracy. They also addressed limitations set by the 60-year U.S. blockade of Cuba.

Maddi Johnson, a Workers World Party member, described how the Portland End the Blockade of Cuba Committee protests the U.S. blockade with monthly pickets/car caravans. These actions are part of worldwide protests inspired by the Bridges of Love Movement, launched by Cuban American opponents of the blockade in Miami and Seattle. A significant part of the Cuban American community in the U.S., including in Miami, wants the blockade ended and normal relations resumed between Cuba and the U.S.

Johnson said: “Our next activity will be when world governments once again overwhelmingly vote in the U.N. General Assembly to condemn the U.S. blockade on Cuba. There will be large protests at the U.N. headquarters in New York City, to be joined by protests around the U.S. Watch for an October or November date!”

Carley Werdel spoke highly of the locally integrated people’s organizations that form the front lines of political mobilization in Cuba. Tamara Musafia emphasized that Cuba’s socialist system is a model that people in the U.S. could benefit greatly from studying.

In spite of the blockade, the small country of Cuba has successfully developed its own vaccines to defeat COVID-19 and is providing those vaccines to other poor countries for much less than the big biotech companies demand.

In Havana, the Pastors for Peace Caravan attended a presentation of the role and skills of the Cuban fire service. Two weeks later these same firefighters were rushed 100 miles to the oil port of Matanzas, where a huge oil tank had been struck by lightning. The resulting fire and subsequent explosions destroyed several oil tanks and took the lives of 16 local firefighters.

This author spoke to the crowd about how solidarity quickly flowed in from people and governments around the world. Mexico and Venezuela immediately dispatched their own firefighters to help. No help came from the U.S. government. But individuals and groups from the U.S. rapidly raised tens of thousands of dollars to purchase and send badly needed medications to treat the hundreds of injured.

A separate fund exists to purchase and quickly send five anesthesia machines and related supplies to the Calixto Garcia trauma hospital/center in Havana, where those with the most serious burn injuries were taken. This hospital has 23 operating rooms and only two functioning anesthesia machines. Donations to the fund can be made here: ghpartners.org/cuba2022/.

The Cuban health service has the skilled personnel and scientific know-how to produce most of the medicines and medical equipment it needs, but the brutality of the U.S. blockade stops the country from buying the raw materials and mechanical spare parts needed for adequate health care. And now the loss of all that fuel oil is directly causing major power outages throughout Cuba.

Solidarity, in the spirit of Cuba!