Over 1,700 educators went on strike in working-class Kent, Washington, near Seattle, to open the school year. On Aug. 22, 1,600 school workers voted by 94% to walk out, according to Kent Education Association Vice-President Layla Jones. Picket lines of the KEA went up Aug. 25, and by the weekend the union was still locked in negotiations with the district. (Seattle Times, Aug. 25) 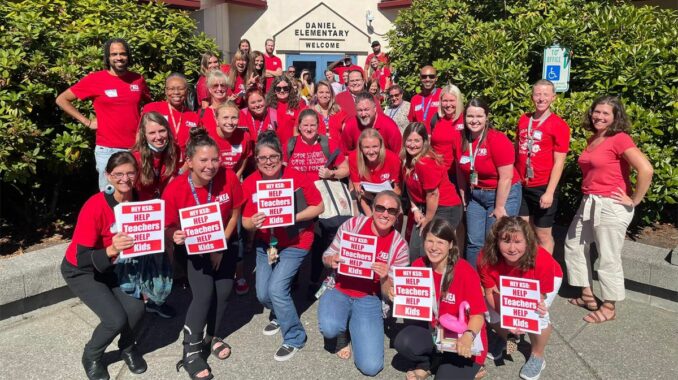 The Kent School District has 25,000 students; 70% are students of color, and many are from immigrant communities. Like in working-class schools everywhere, Kent school workers and teachers have been forced to educate under extreme hardship, before and since COVID-19. Educators in Kent say they are greatly understaffed in a number of areas due to government austerity and a lack of support from the pandemic.

The KEA demands a pay increase, smaller class sizes and more manageable caseloads for staff working with English learners and students in special education. About 25% to 30% of the students at Kent-Meridian High School are English learners.

A release from the KEA says: “At issue are several anti-union proposals — including contractual proposals against workplace discrimination — and the district’s refusal to pay a state-funded, cost-of-living pay increase.”

Kent educators went on strike in 2009 for 15 days. They were forced back to work at that time by the threat of an anti-worker injunction from the Superior Court, which threatened heavy fines.