Ever since then-Prime Minister Margaret Thatcher “solved” Britain’s economic problems by hammering down workers while ignoring their needs in the 1980s, the British rulers have preferred the tactic of confronting and crushing the workers. This summer, workers have begun to hit back with a wave of strikes. 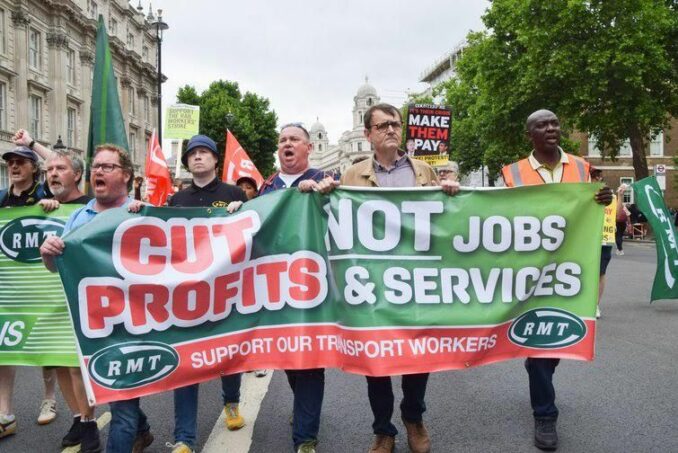 Thousands, organized by the Trades Unions Congress, marched through central London June 18 over the cost of living crisis and the need for higher wages.

This unstated ruling-class goal of crushing the unions, along with dreams of past imperialist prosperity, lay behind the ruling-class backing for Brexit. The British rulers wanted to use anti-migrant bigotry to divide the working class, and they wanted to avoid the culture and rules of the European Union, which are based on past struggles of workers on the continent.

But they only completed their departure from the EU Jan. 31, 2020, a month before COVID-19 hit England, Scotland and Wales. Both COVID-19 and Brexit caused severe economic problems that made the lives of workers there harder.

As in the U.S., workers avoided jobs that were onerous, those requiring risks, those with erratic schedules and those paying less than a living wage. The absence of workers migrating from EU countries exacerbated these shortages, as did supply chain issues caused by COVID-19.

The war in Ukraine and the anti-Russian sanctions create another huge economic problem. Prices on fuel products, currently restricted, are scheduled to go up by 80% on Oct. 1 for England, Scotland and Wales.

The British government just announced that it is applying much stricter sanctions on Russia at the end of June, as well as pouring money into training the Ukrainian army and supplying weapons. The government has avoided detailing the impact of these sanctions beyond indicating that it will cost billions of pounds. (1 British pound equals $1.18, Aug. 22)

The National Union of Rail, Maritime and Transport Workers (RMT) represents most of the railroad workers, except the train drivers who are represented by the Associated Society of Locomotive Engineers and Firemen (ASLEF). Both unions are cooperating in the struggle against the train-operating companies; there have been six strikes of at least 24 hours against these companies in England since the beginning of June.

There was also an Aug. 19 strike on the London Metro that affected service to the 5 million people who use it every workday.

The unions were demanding raises of around 7%, while the company was offering 3% and threatening layoffs. The bosses resisted improving working conditions and safety.

In July, the government opened up an attack on the unions’ ability to strike, using as justification the “inconveniences” caused by the strikes. They passed a law allowing the use of scabs, which they call “agency workers,” to maintain services and production.

Frances O’Grady, the head of the Trades Union Congress (TUC), a federation representing the majority of unions in England and Wales, said: “This is a recipe for disaster. Unions and industry bodies have both warned ministers against these reckless plans. Using agency workers to try and break strikes would put these workers in an appalling position, worsen disputes and poison industrial relations. Make no mistake. This government wants to undermine the fundamental right to strike.” (tinyurl.com/2p9xmn7a)

Felixstowe is Britain’s main container port, handling over 2 million containers a year, about half of all containers entering Britain. It is a major trans-shipping point for Hamburg, Germany, and Rotterdam, Netherlands, two major EU ports.

According to Unite, the union that represents the port workers, “Over 1,900 members of Unite, employed in manual roles at the docks, including crane drivers, tug boat operatives and stevedores, began eight days of strike action this morning in a dispute over pay.” (unitetheunion.org, Aug. 21) They demand better working conditions and a safer environment.

This is Felixstowe’s first strike in 30 years. Inflation hit 10.2% in July and is projected by the Bank of England to hit 13% in the last quarter of 2022.

Besides workers in transportation, nurses, teachers, post office workers and airline workers have made plans for further strikes in the fall and winter.

The British ruling class has provoked a fight. But from the angry organized response the workers are showing, it’s a fight the workers can still win.