The western corporate media described the Democratic People’s Republic of Korea’s launch of two missiles Aug. 17 as threatening, aggressive and paranoid. What most media failed to report was the prior U.S. military exercises with Japan and South Korea off Hawai’i, in preparation for extensive war exercises off Korea, that provoked the DPRK’s two warning shots. 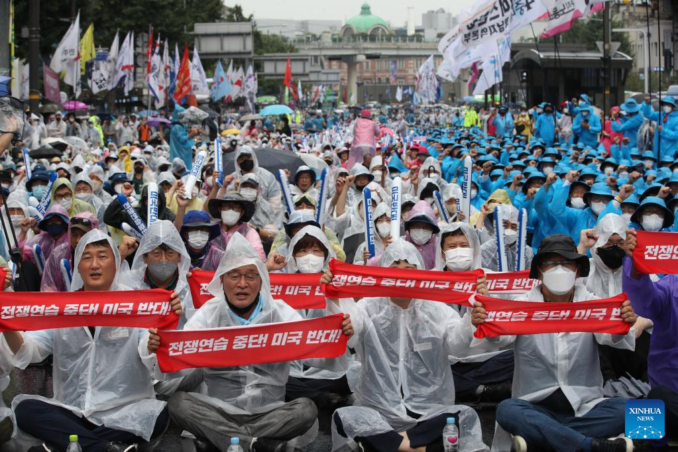 Tens of thousands of South Koreans demonstrate Aug. 13, during the first round of military drills Aug. 8-14. This “military drill” was described as preparation for a larger 11-day U.S.-South Korean military operation Aug. 22 to Sept. 1. Credit: Xinhua

An Aug. 19 article in the Daily Beast, an online news website, headlined a longer and upcoming military land, sea and air exercise this way: “U.S. to Enrage Kim Jong Un With Assassination Dry Run.” The article then reads:

“For the first time in years, joint exercises between the U.S. and South Korea this month will culminate in a trial run of decapitating the North Korean leadership.

“The U.S. and South Korea are about to play war games again, and this time they’re going for the jugular,” meaning to assassinate DPRK leader Kim Jong Un. (thedailybeast.com, Aug. 19)

The DPRK (North Korea) has not carried out a nuclear test since 2017, when these especially aggressive “kill chain” and “decapitation” drills were last conducted. Now there are predictions that the DPRK will carry out new nuclear tests in response.

People’s Korea wants peace but has been forced to develop nuclear weapons in order to defend themselves. Despite decades of threats and the harshest economic sanctions, they have refused to surrender.

This courageous spirit of Juche and self-reliance deserves the respect and solidarity of workers’ movements and anti-imperialist activists around the world.

The exercises off Korea are described as a joint project of South Korea and the U.S. Armed Forces. A four-star U.S. general commands South Korea’s military, however, and the U.S. military has commanded South Korean forces since 1954, following the 1950-53 Korean War.

As with NATO, the U.S. military remains in command in South Korea. NATO’s military drills are under U.S. command and use U.S. equipment and training. Washington has “operational control” of the South Korean armed forces.

According to the Aug. 16 “Stars and Stripes,” a daily U.S. military newspaper and website, “Exact troop numbers [of the deployment] and equipment used for the upcoming exercise have not been publicly released by U.S. Forces Korea or the Ministry of Defense.”

As an additional insult to the Korean people, the former colonial occupier of Korea before the U.S. division and occupation of South Korea, the Japanese military, will take part in the military drill in Korea. There are more U.S. troops stationed in Japan than in Korea.

Ankit Panda of the Carnegie Endowment described to the Daily Beast the three-stage training operation:

“The ‘kill chain’ is the first axis of South Korea’s ‘three-axis defense plan’ focusing ‘on the intelligence and strike capabilities necessary to detect and preempt North Korean missile launches.’ Second is ‘Korea Massive Punishment and Retaliation,’ KMPR, climaxing in the decapitation in which special forces snuff the target — one Kim Jong Un — in an intricately choreographed shock strike. Third is air and missile defense.”

DPRK President Kim Jong Un warned that the U.S., by “holding large-scale joint exercises, is pushing relations to a point that is irreversible.”

The terms “kill chain” and “decapitation,” which would involve a drone strike according to U.S. experts, exacerbate tensions with the DPRK.

The Jan. 2, 2020, U.S. drone assassination of Gen. Qassem Soleimani of Iran, leader of the Revolutionary Guards’ Quds Force, and nine Iraqi political and military leaders is an example of threat of U.S. lawless drone strikes.

South Korean President Yoon Suk Yeol cynically offered the DPRK possible food shipments in return for a DPRK agreement to disarm. The U.S. followed the forced disarmament of Iraq and Libya with those countries’ complete destruction. The North Korean leaders are well aware of that lesson.

Legacy of the Korean War

Since 1945, the U.S. has unilaterally divided Korea and installed puppet governments in the south in defiance of the Korean people.

A U.S. bombing campaign from 1950-53 leveled the DPRK in a war that killed over 3 million Koreans. U.S. Air Force planes dropped 420,000 bombs on the 400,000 inhabitants of Pyongyang, capital of the Democratic People’s Republic of Korea. Not a building was left standing.

And it is the U.S. military occupation of Korea that installed corrupt, repressive governments.

The Status of Forces Agreement (SOFA), which laid down the rules governing and protecting U.S. personnel stationed in South Korea, means that South Korean courts and laws have no control over the U.S. army of occupation.

The U.S. maintains 73 military bases in South Korea. South Korea is forced to pay for this monstrous occupation. Now they are pressured to pay higher costs for hosting these troops.

Camp Humphreys in Pyeongtaek, south of Seoul, is the largest U.S. overseas military base, housing USFK headquarters and thousands of troops, civilian workers and their family members.

The U.S.-ROK combined military exercises, which prepare for an all-out war with North Korea, have developed into large-scale exercises that mobilize weapons, equipment and U.S. troops on the Korean Peninsula. These U.S. “war games,” which take place several times a year on the Korean Peninsula, are a threat to 80 million Koreans — north and south.

The military exercises have involved the use of B-2 and B-52H bombers, which are designed to drop nuclear bombs, and nuclear-powered aircraft carriers and submarines. Due to their scale and provocative nature, they heighten tensions not only in Korea but throughout Asia.

Harsh U.S. economic sanctions on the DPRK on every form of industrial products, fertilizer, food products and medical supplies, have continued over 70 years, even during floods, droughts and the global COVID-19 pandemic.

A massive demonstration of tens of thousands of South Koreans Aug. 13 took place during the first round of military drills Aug. 8 to 14, itself preparation for a larger 11-day U.S.-South Korean military operation Aug. 22 to Sept. 1.

The Aug. 13 protest demanded the withdrawal of all U.S. forces in South Korea and that the government suspend the upcoming joint military exercise with the U.S. and dissolve the South Korea-U.S. military alliance.

For nearly 70 years since the cease-fire in 1953, the U.S. has refused to sign a peace treaty with the DPRK, to allow for peaceful relations between South and North Korea or to end the military occupation. This threatens a renewed U.S. war. The militarization on the Korean peninsula grew continually in these decades.

The demand that the U.S. finally sign a peace treaty with the Democratic People’s Republic of Korea resonates throughout Korea. This just demand deserves our renewed solidarity and global support.