The psychologists, social workers and other mental health care workers at Kaiser Permanente facilities in California are out on the picket line. These members of the National Union of Healthcare Workers are on strike because the hospital administration refuses to increase staffing to meet the demand for services. (East Bay Times, Aug. 19) 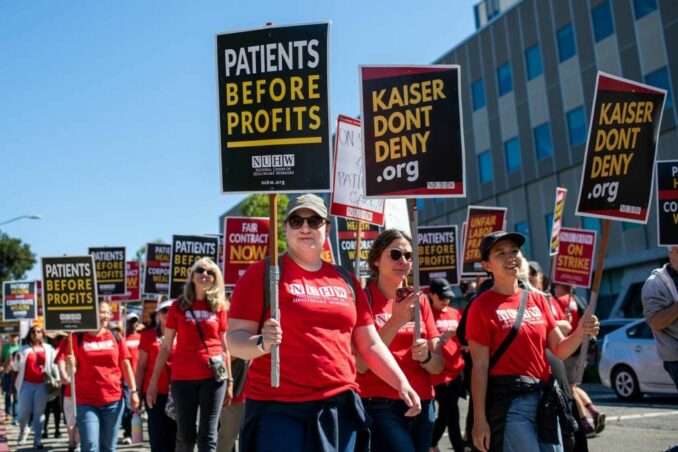 Instead workers’ caseloads are reaching unsafe levels. Wait times for appointments are putting patients at risk. Despite Kaiser’s claims that the strike is having little impact on care because nonunion psychiatrists are filling in, patients are reporting they are being told that no appointments are available.

Beckers Hospital Review reported that Kaiser plans a $1.7 billion expansion. Yet it refuses to improve staffing levels for mental health services. Another example of profit over patients.

Minnesota nurses ready for a strike

Across their state, 15,000 nurses at 15 hospitals have authorized their union, Minnesota Nurses Association, to call a strike. They are demanding hospital administrations increase staffing levels and pay. (Minnesota Reformer, Aug. 11)

There is a nationwide exodus of professional nurses from direct patient care. Nurses are leaving the bedside, as hospital executives are pocketing million-dollar salaries. The Minnesota nurses want that money to compensate nurses who have worked through the pandemic and to attract new nurses, thereby improving patient-to-nurse staffing ratios.

Patient safety incidents like falls and bedsores have been on the rise in Minnesota facilities, as a direct result of increased nursing workloads. This creates an ethical dilemma for nurses, when they cannot practice according to professional standards of care. The Minnesota nurses are sending a message to their employers: They would rather strike than continue to put their professional licenses on the line or their patients’ safety at risk.

BCTGM: Strike two on the bosses!

Bakery, Confectionery, Tobacco Workers and Grain Millers Union (BCTGM) members are not afraid to stand up to snack-food bosses. This month, Bakery Union workers are on strike at two prominent food businesses. In Fresno, California, BCTGM Local 85 called an Unfair Labor Practices strike against the CornNuts plant owned by Hormel. When Hormel took over the plant in 2021, the corporation altered the medical plan without notifying employees, an Unfair Labor Practice. Changes that took effect in January have created hardships for workers, who are incurring mounting medical debt due to higher deductibles and increased out-of-pocket expenses. (tinyurl.com/544arpnw)