An Aug. 2 post on twitter from @UnionBustingBot, revealing Starbucks had recently hired former Pinkerton employee and CIA agent Amanda Stanfill as the Manager for Global Intelligence for Retail Operations, went viral. Stanfill has quite an impressive resume as an agent of the imperialist U.S. security state and a union-buster. 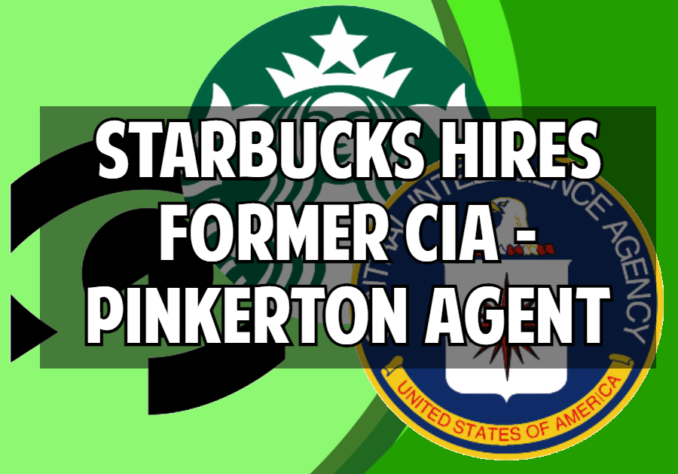 For the past year and a half, Stanfill was listed as a full-time Intelligence Analyst for Pinkerton. In the previous 12 years, she worked multiple U.S. government jobs, including Collection Management Officer for the CIA, Political Affairs Foreign Service Officer for the U.S. Department of State — where she managed information collection programs on three continents — and two other CIA jobs as a Counter-Narcotics and Organized Crime Program Manager and Northeast Asia Political Analyst.

This hiring comes right in the middle of the ruthless union-busting war Starbucks is waging against its own workers. Howard Schultz has now made a name for himself as an anti-worker tyrant, so that few people who’ve been keeping up with the campaign are surprised to hear about even the most blatant examples of union busting, such as store closings and mass firings, which have become routine over the months since the start of the union campaign.

But this most recent hiring of a former Pinkerton and CIA operative is so cartoonishly sinister, it’s astonishing even to many Starbucks workers like myself, who’ve seen the union busting firsthand.

Over the last few days, Starbucks has escalated union busting to an unprecedented level by pressing charges of assault and kidnapping against union organizers in South Carolina, after workers engaged in a march on the boss to peacefully deliver grievances. Ten of the 19 workers at this store have received a call from Starbucks Partner Resources representatives telling them that they’ve been placed on paid time off with no official return date and will not be allowed to enter any Starbucks store in the country. This leaves one wondering if this is a new move out of the Pinkerton playbook.

At the time of this writing, Stanfill’s LinkedIn profile that the screenshots were derived from has been taken down, likely an effort by the company to clean up after her profile went viral. There was also a page on the website Apollo that listed much of the same information on Stanfill’s employment history and current job at Starbucks, which has now been removed or edited heavily. But the screenshots still exist.

CIA and Pinkerton legacy of brutality against workers

It’s no mystery why Starbucks would want to cover its tracks. The bloody history of these agencies speaks for itself and tells you everything you need to know about how the company views its own workers.

Both the CIA and Pinkerton have an extensive history of violence and brutality against workers and union organizers. The Pinkerton agency started out in the mid-1800s as a private investigator firm and has expanded to all sorts of activities related to espionage, security and strikebreaking. They laid the framework for what modern government intelligence agencies have become today. Pinkerton has at many points historically been used to violently repress the labor movement.

inkerton has taken part in numerous high-profile massacres of workers, such as in the Great Railroad Strike of 1877, where Pinkerton agents alongside federal troops violently put down a nearly 70-day strike of railway workers across the country, killing around 100 people. Pinkertons played a role in the famous Battle of Blair Mountain, where a violent struggle ensued between some 10,000 West Virginia coal miners and 3,000 law enforcement officers, soldiers and mercenaries with Pinkerton and other outfits.

Pinkerton agents took part in the Ludlow Massacre of 1914, where the Colorado National Guard set fire to a mining encampment, killing 66 people. These are only a few of many violent acts perpetrated by Pinkertons against workers and unionists.

The CIA has its share of blood on its hands. The CIA has been a tool for upholding U.S. imperialist interests in countries all over the world, including the coup that placed the Pinochet regime in power in Chile, resulting in the mass killing, torture and disappearances of socialists and labor organizers and the total dismantling of Chile’s economy for plunder by the United States. The CIA armed and trained right-wing contra forces in Nicaragua, which carried out assassinations and other terrorist attacks against labor organizers, schools, health care centers and even U.S. citizens like Ben Linder, who was killed as a volunteer building electrical grids for rural villages.

Both the CIA’s and Pinkerton’s history have been well-documented and would take far too long to lay out in full here. But one does not need to know the whole history to recognize this hiring, coupled with extreme crackdowns on the union, as nothing short of a declaration of war by the company against Starbucks Workers United (SBWU).

So far, much of the repression at Starbucks has actually pushed workers who were formerly on the fence to join the side of the union, by exposing the true nature of the company — which has put so much time into building a reputation as an inclusive, progressive workplace. If anything, these developments reveal how truly afraid the company is of the union, and that true strength lies in a united working class.

The author is a Starbucks worker in Buffalo, New York, a member of the SBWU Organizing Committee at their store, and a member of Workers World Party.