The new school year in the Oakland Unified School District began on a seriously sour and disturbing note: a physical attack on people protesting a school closure and the retaliatory firings of teachers. 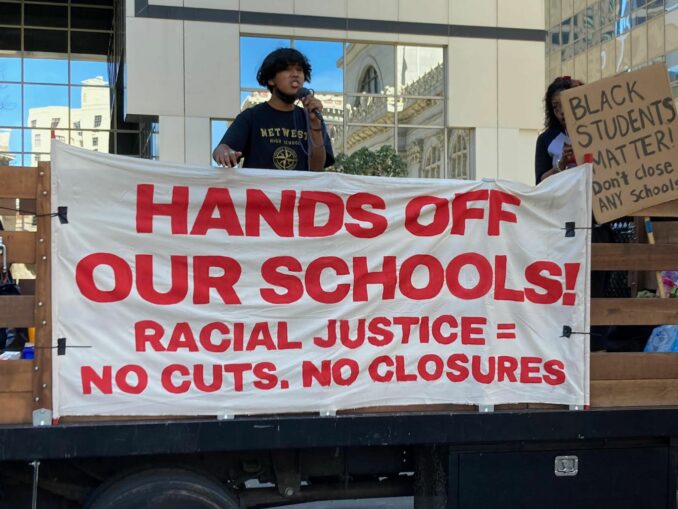 Since the end of the school year, parents, students and community members have been occupying Parker School, one of three schools closed by OUSD. Throughout the summer, volunteers have been providing food, services and classes to young people in this East Oakland community.

The Oakland school district has maintained a hostile posture toward this community reclamation of a public school. On Aug. 4, a private security squad hired by OUSD arrived at Parker School and assaulted parents and community members. According to the community coalition pulled together to protest this attack, at least 11 people were injured, and four were sent to the emergency room.

Three teachers have been targeted for dismissal and retaliation due to their visible support for the Parker School occupation. Paloma Collier, a contracted gardening teacher at Markham Elementary, was abruptly fired and her gardening program terminated. Denise Huffstutler, a former Parker School teacher, received an unsatisfactory evaluation, which was placed in her personnel file and may impact her teaching career. 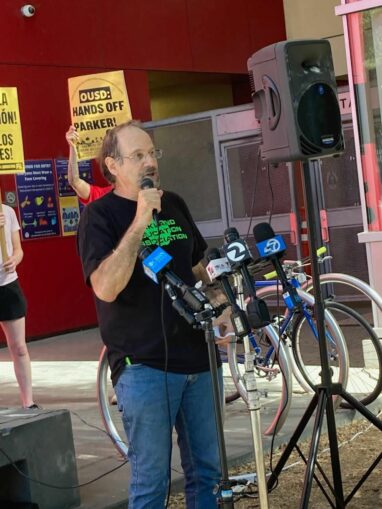 Craig Gordon, who has worked in OUSD for 32 years as a classroom teacher and most recently as a substitute teacher, was abruptly terminated for no reason by the district Aug. 8, the first day of school. Gordon was a very visible union and community activist, who has filed grievances on behalf of substitute teachers during the COVID-19 pandemic. One of the founders of Schools and Labor Against Privatization (SLAP), he was a strong supporter of the Parker School occupation.

At a press conference Aug. 10, organized by community members and rank-and-file teachers, two leaders of the Oakland Education Association’s Substitute Teacher Caucus spoke out against the retaliatory firing of Gordon. Sharon Thomas, Executive Board representative from the caucus and Judy Greenspan, Chair of the caucus, set the tone of the press conference, which quickly became a speak-out for justice.

Thomas read from the statement circulated in her caucus: “This firing of a retired OUSD teacher and a longtime substitute teacher is outrageous and comes at a time when OUSD is suffering a teacher shortage. On its face it makes no sense. However, we believe that Craig was targeted because of his outspoken activism on behalf of substitute teachers and possibly for his support of the community reclamation of Parker School.”

According to the California Education Code, school districts can hire and fire substitute teachers at will. However, during the pandemic, OUSD literally begged retired teachers to come back to work due to the many vacancies. The substitute caucus is trying to remedy that unfair practice.

Greenspan began their statement with the slogan of the International Longshore and Warehouse Union leadership, which has been a popular labor slogan for over a century: “An injury to one is an injury to all.” Greenspan reminded everyone, “We will not tolerate this attack on our Oakland community members or on our teachers. It is time to rise up and protest this violence and illegal retaliation against our union members and all educators.”

Gordon then spoke, calling out OUSD for its racist closing of schools in Black and Brown communities. “This is definitely an attack on teachers who are working to stop school closures,” he said. Gordon pointed out that OUSD is targeting the most vulnerable teachers — a substitute teacher and a contract educator.

A resolution from the substitute caucus will be presented Aug. 16 at an OEA union representatives council meeting. This resolution calls upon the leadership of OEA to take immediate action to ensure that Gordon be reinstated with back pay and that the retaliatory acts against the other two teachers be reversed immediately.

Judy Greenspan works as a substitute teacher at an Oakland public middle school.