Rashida Tlaib of Detroit made history Jan. 3, 2019, when she became the first Palestinian-American Representative in the U.S. Congress. Rep. Tlaib and Rep. Ilhan Omar were also the first two Muslim women elected to the House. Using her position to denounce Israeli apartheid, Rep. Tlaib has drawn the ire of Zionist organizations. But she was reelected in 2020 and will most likely be returned to the House Nov. 8, having won the Michigan Democratic primary election Aug. 2. 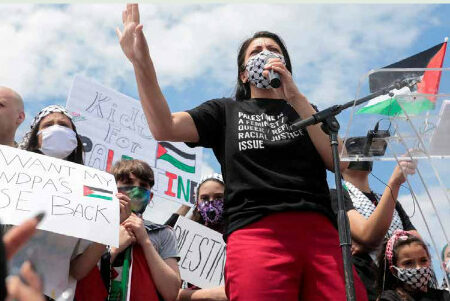 Rep. Tlaib is a member of a more progressive caucus among House Democrats and one of “the Squad,” which is composed of women of color including Rep. Omar, Rep. Cori Bush, Rep. Alexandria Ocasio-Cortez and Rep. Ayanna Pressley. Rep. Bush of Ferguson, Missouri, also won the primary election Aug. 2.

In typical racist fashion, Rep. Tlaib’s Zionist opponents played the game of pitting the African-American and Arab communities against one another. In an attempt to draw Black voters away from Tlaib — whose redrawn 12th District now includes Dearborn and Dearborn Heights, the heart of Michigan’s Arab community — a group calling itself Urban Empowerment Action PAC promoted the candidacy of Detroit’s African-American City Clerk Janice Winfrey.

The group, claiming to be a collaboration between Black and Jewish businesspeople, ran full-page ads in the Detroit newspapers, attacking Rep. Tlaib for, among other things, advocating defunding the police. The PAC claimed this would hurt the Black community. One of Winfrey’s campaign priorities was “supporting Israel as a free state.” (ballotpedia.org)

The tactic failed miserably. Rep. Tlaib, whose campaign site calls for “racial and immigration justice, economic and housing justice, health care for all, human rights around the world, environmental justice and LGBTQ+ and gender justice,” received 65% of the vote in her multinational district. (rashidaforcongress.com)

Historically the electoral process in the U.S. has been set up to block or limit the representation of Black and other communities of color. Rich white men have dominated the executive, legislative and judiciary branches of government.

Detroit is disenfranchised under the new Congressional district map that reduced the number of Black-majority House districts in Michigan. When Rep. Brenda Lawrence retires next year, there will be no Black representatives in Congress from southeast Michigan — for the first time since 1955. The new Michigan state legislature, whose districts were also remapped, will have fewer Black representatives.

The election and reelection of the Squad represent a win against the historic, systemic disenfranchisement of Black, Latinx, Indigenous, Asian and Arab voters.

But to bury systemic racism once and for all, the multinational working class must put an end to the capitalist system that profits from all forms of oppression — including Israeli apartheid.