A long anticipated confrontation between residents fighting for housing justice and the Philadelphia Sheriff’s Department, protecting gentrifiers’ interests, broke out Aug. 8 — 30 days after the start of a protest “tent city.”

Around 70 low-income Black and Brown residents of the University City Townhomes, on the corner of Market and 40th Streets, had protested their pending eviction, scheduled for Sept. 8. To draw public and media attention to their struggle to retain affordable housing and remain in their community, the residents and supporters set up 15 to 20 tents on the site July 9. Large banners around the area proclaimed it “the People’s Townhomes.”

A barrier fence made from wooden pallets secured together and painted with colorful slogans surrounded the complex. Some of the signs attached called out the owner Brett Altman: “Shame on Altman; Don’t treat us like trash!”

The protests drew broad support from community members, particularly other housing activists. Information tables at the site were maintained throughout the month-long protest.

On July 22 a Common Pleas Court of Philadelphia judge granted a request by property owner Altman Group to dismantle and remove all tents, tables, chairs and canopies used by the protesters. After residents and their supporters continued to defy the court order, on Aug. 5 the same judge issued a final order for the Sheriff’s Department to remove the protest encampment Aug. 8.

Expecting the Sheriff’s Department to show up to remove the tents, residents and their supporters put out the alert to gather early in the morning of Aug. 8. Around 100 people responded, prepared to defend the camp.

They started with a rally at 40th and Market streets at 8 a.m. before the sheriffs came. Residents Darlene Foreman and Melvin Harriston led chants and thanked everyone for coming. They noted that the fight for housing is a national struggle, one that will break out beyond Philadelphia, and that this is just the beginning.

Pam Africa spoke, reminding people that this was the anniversary of the police eviction of MOVE members from their house in nearby Powelton Village on Aug. 8, 1978. Police destroyed the home, and nine MOVE members were imprisoned for over 40 years. 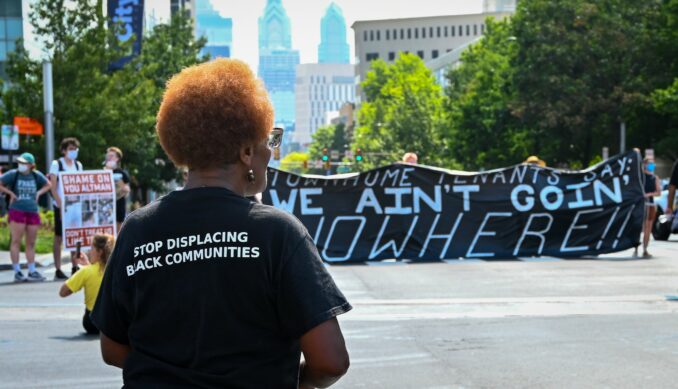 At 9:00 a.m., demonstrators stood along the pallet fencing, as 20 to 30 armed men and women wearing Sheriff’s Department badges marched to the encampment entrance. One of the plainclothes officers confronted resident organizer Foreman, telling her they were going to remove the tents. Foreman abruptly ended their conversation, picked up a bullhorn and started chanting: “We ain’t going nowhere!” and “Who do you protect? Who do you serve?”

The cops then moved into the grounds of the UC Townhomes and began knocking down the tents and canopies and hauling them away. Protesters resisted throughout the process, sometimes pulling on one side of tents as the cops pulled on the other. Some held on to canopy stakes as the cops tried to move them. Two residents remained in their seats, refusing to move as the sheriffs had to lift the canopies over their heads.

As the sheriffs moved through the area, demonstrators confronted them with chants and frequently circled around them. Many carried signs reading: “You can’t tear down community,” “Evict the developers; Save UC Townhomes” and “Housing is a human right.” 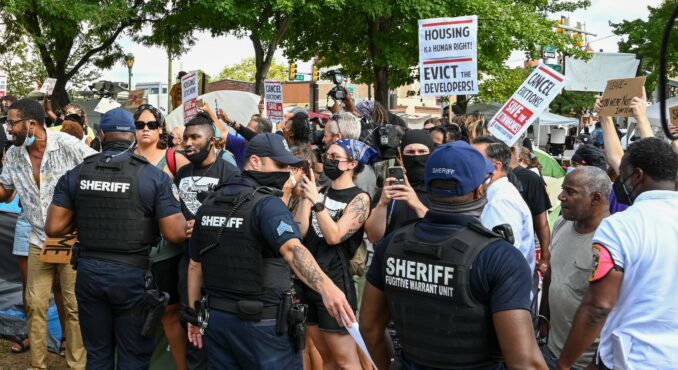 According to the court order, none of the tents are to be destroyed, and people have 30 days to claim them.

Historically in Philadelphia, public sanitation workers have been made to dismantle houseless peoples’ camps and destroy their belongings. Anticipating that city workers would again be made to do the gentrifiers’ bidding, residents and activists issued an appeal to area workers to refuse any orders to dismantle the protest, noting that affordable housing is a workers’ issue. The appeal garnered over 400 local, national and even international signers.

Further strengthening residents’ voices, the Labor for Black Lives Coalition sent a strong statement of solidarity with the UC Townhomes residents to Philadelphia Mayor Jim Kenney and other city officials. Signed by 16 labor organizations representing tens of thousands of Black and Brown workers — including some of the largest unions in Philadelphia — the statement called on the city to “immediately block the sale of UC Townhomes.”

Their statement read in part: “As a coalition of labor unions representing Black and Brown workers, we know that securing safe and affordable rental housing is a constant struggle for working-class people of color in the city. A large number of the workers we represent are required to reside in the city as a condition of their employment; but rising rent costs, a shortage of affordable housing and structural barriers embedded in the rental application and affordable housing voucher process make securing housing increasingly difficult. We need our city’s leaders to stand with our Black communities so that our workers are able to continue living and working in Philadelphia for years to come.” (The complete statement is available at workers.org/2022/08/65911/.)

When the sheriffs and later bicycle cops finally retreated, residents and supporters took to the streets, marching behind a huge banner with the slogan: “UC Townhomes tenants say ‘We ain’t going nowhere!’” They marched through sections of the University of Pennsylvania campus before returning to the UC Townhomes site.

At several major intersections demonstrators blocked traffic and kept up a steady stream of chants. Speakers called out Mayor Kenney and members of the city council for failing to support residents, noting that city officials, the gentrifiers and the University of Pennsylvania all point the finger at each other, while doing nothing to stop the pending evictions.