As of July 30, at least 25 people have been reported dead from the destructive flash flood in eastern Kentucky that started in the early evening of July 27. 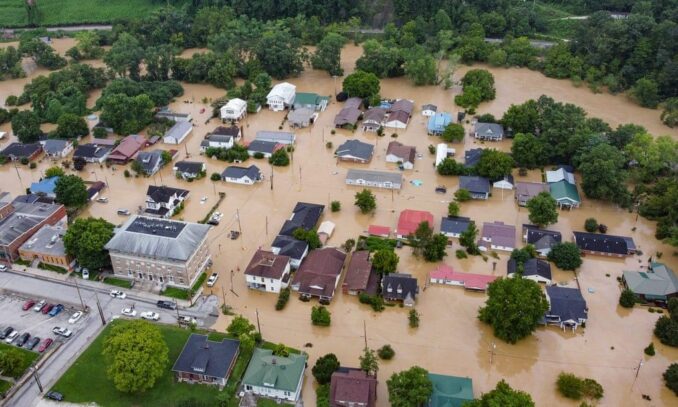 Kentucky Governor Andy Beshear declared a “state of emergency” shortly after the heavy rainfall. Parts of West Virginia and Virginia were also affected, but neither compares to the damage inflicted on the people in the eastern region of Kentucky. In addition to the official death toll, which is expected to increase in the coming days, there are many more people missing or unaccounted for.

One of the most horrific stories reported was about four young siblings in Knott County, who were physically torn from their parents just moments after seeking shelter together and were found dead on July 29.

The Kentucky National Guard has been assigned to assist with “search and rescue” operations, while an incident management team was sent from the Federal Emergency Management Agency.

This reporter spoke with hospital workers at the Whitesburg, Hazard and McDowell Appalachian Regional Healthcare facilities, many of whom have either lost everything they owned or are close to people who did. ARH is one of the largest employers in the area and is one of the only employers that still honors union recognition.

Workers at ARH are represented by the United Steelworkers and National Nurses United. The hospitals were originally built in the 1950s and 1960s by the United Mine Workers of America for union miners and their families. According to WKYT news reports of July 29, 61 ARH employees lost everything, and 30 are unaccounted for.

“Night shift employees had to work into the day shifts, because the people scheduled for day shift could not arrive and the night shift workers could not leave,” one ARH hospital worker told WW. “To make matters worse, several people lost everything while they were here working.” Nurses at ARH, all of whom are represented by NNU, have created GoFundMe pages on social media for those affected.

Appalshop, a progressive media arts center in Whitesburg, was partially destroyed, resulting in the loss of much historical material and artifacts. Established in 1969, Appalshop is known for releasing a lot of social justice-themed resources, such as a documentary about civil rights advocate Anne Braden and a record for activist folk singer Si Kahn. The shop has produced important projects to raise awareness about coal mining and its impact on the environment and miners’ health. Despite its material losses, Appalshop has been using social media to collect food and medicine supplies for others in need.

Climate crisis? Capitalism is to blame!

The five counties in Kentucky hit hardest are Breathitt, Floyd, Knott, Letcher and Perry, all of which were once thriving with well-paid coal mining jobs. Throughout much of the 20th century, there were many militant strikes, with fighting between multinational union coal miners and the operatives of coal company bosses, who had cops and the terrorist Ku Klux Klan on their side.

Now material conditions have changed. There are very few mining jobs left in eastern Kentucky, and the mining jobs that do exist are mostly nonunion.

In the 1960s, coal operators wanted to quickly increase their profits by expanding strip mining projects. Strip mining is alleged to have started as early as 1800, but underground mining was the most common form of coal extraction until the mid-20th century.

In addition to strip mining, coal bosses looked to other forms of mechanization, such as long-wall mining and even the environmentally devastating mountaintop removal to advance their capitalist gains. Automated forms of coal extraction were detrimental to the coal miners, their families and to the environment where they lived. And the Environmental Protection Agency has estimated that mountaintop removal “valley fills” are responsible for burying more than 2,000 miles of vital Appalachian headwater streams and poisoning many more. (tinyurl.com/4jsv4hay)

Workers World Party co-founder and late Chairperson Sam Marcy warned workers early on about the growing dangers posed by automation under capitalism. In his 1985 “High Tech, Low Pay,” Marcy wrote of how technological innovations under capitalism can be disastrous to the working class. “High technology, especially in the era of computers and electronics, continues to take quantum jumps. A plant which just recently may have had 10 years to [continue production] can now become obsolete as a result of the constant revolution of the means of production.”

Despite the barrage of pro-coal industry propaganda throughout eastern Kentucky, southern West Virginia and southwest Virginia, several experts have warned that decades of strip mining and mountaintop removal have likely contributed to mass flooding over the years.

According to Jack Spadaro, a former director of the National Mine Health and Safety Academy, there are credible findings by the Environmental Protection Agency, the Army Corps of Engineers and the West Virginia state government: “These are scientific studies done by teams of scientists, hydrologists and engineers; they’ve all shown there is a link between mountaintop removal mining and flooding.” (Public News Service, July 8, 2009)

Temperatures in the places hit hardest by the recent flash flood have been abnormally high through most of the 2022 summer. According to a July 29 report from CNN regarding the flood, “As global temperatures climb, the atmosphere is able to hold more and more water, making water vapor more abundantly available to fall as rain.”

Even if coal mining is less common than it used to be in eastern Kentucky, the damage caused by strip mining and mountaintop removal is already done. The existence of climate change is indisputable, and it is a symptom of capitalist exploitation.

The only way to prevent future floods is for workers and oppressed people to wipe out the profit motive that is the determining factor of all business decisions under capitalism. Only a socialist system can help reverse the destruction caused by capitalist profit and greed.