No imagining is needed to picture what global warming/climate change might look and feel like. Millions of people in the Northern Hemisphere are currently living it.

This is an extraordinary summer. Wildfires and record temperatures in Europe, grass fires in London and widespread and deadly wildfires in Portugal, Spain, France, Turkey and in the drought-riven U.S. West. Temperatures over 100 F are affecting the U.S., as well as several European countries, where this phenomenon is so unusual that few people have air conditioning. (Bloomberg News, July 21)

A section of the Marmolada Glacier in the Italian Alps collapsed July 3, unexpectedly releasing a powerful avalanche that killed 11 people and swept a hotel across the border into Switzerland. That glacier is showing signs that another section of it may further collapse before the end of this extraordinarily hot summer.

A similar glacier collapse occurred a week later in Kyrgyzstan in the Tien Shan Mountains. Fortunate hikers escaped with their lives and video capturing its stunning power as it tore through the valley.

Glacier collapses are happening due to intense heat waves and lack of winter snowfall. Bob Berwyn, reporting for Inside Climate News, concluded such unpredictable events “could become more frequent and widespread as global warming intensifies heat waves and deprives the ice fields of the snow needed to replenish them. On average, high mountain areas are warming at least twice as fast as the rest of the planet.” (insideclimatenews.org, July 19) 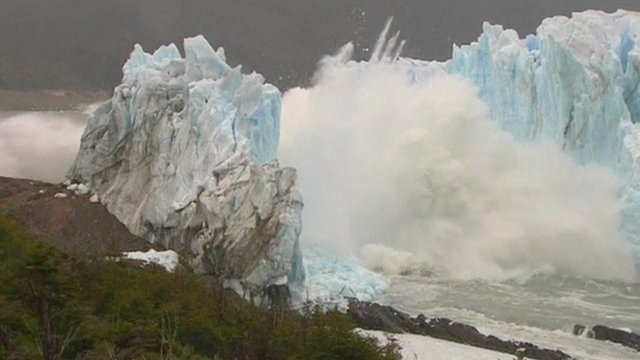 The role of ice

What is happening in the polar and alpine regions of the Earth is of great concern. Ice is critical to establishing and regulating conditions of a habitable planet. It regulates the temperatures of the atmosphere and the oceans, governs weather patterns and sea levels.

When glaciers and sea ice melt, sunlight is absorbed by the land or water they used to cover. This sets up a feedback loop that further accelerates summer melting. (tinyurl.com/4ajakdhv)

There are two ice sheets — the Greenland Ice Sheet in the Northern Hemisphere and the Antarctic Ice Sheet in the Southern Hemisphere. They hold about 70% of the world’s fresh water and are critical to sea levels and ocean currents. The rapid or sudden collapse of sections of these ice sheets could result in the submersion of low-lying islands and even much of the world’s inhabited coastal regions.

The changes in ocean salinity and temperature have already impacted marine life and global weather patterns. People living on the Arctic coast are experiencing changes to their subsistence lifestyle and destruction wrought by intensified storms. Changes are being felt in Western Europe’s historically moderate weather, with intensified summer heat and winter cold, as well as changes in precipitation and storm frequency affecting the livelihoods of millions of people residing in this region. 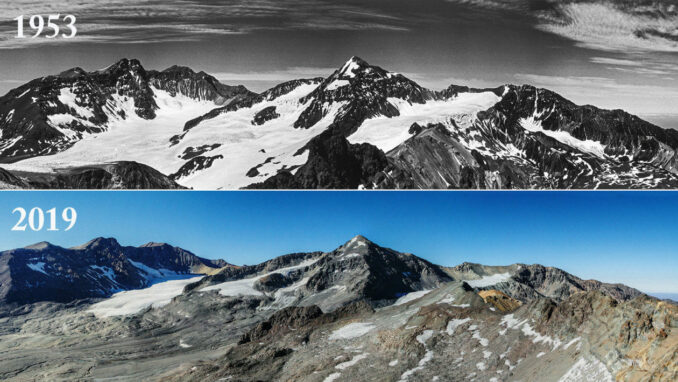 The Olivares Alfa glacier in Chile has lost 66% of its ice mass since 1953.

Besides the glaciers that extend out from the ice sheets, there are inland glaciers in mountain ranges, as the two examples noted above. Even though mountain glaciers represent only 4% of the world’s land ice area, about half a billion people depend on these water reserves. (tinyurl.com/7r2tpy4s) The disappearance of these water resources would trigger major migrations.

In the Andes Mountains in the Southern Hemisphere, 98% of the glaciers have lost ice, more than any others globally relative to the size of the region. The water they supply is vital to the people living in nearby cities. Farmers in the area depend on the glaciers for some of their water for drinking, irrigation and hydroelectric power, especially those who live in arid areas or who are experiencing drought. (tinyurl.com/2d34anzp)

In the Himalayas, global warming has meant that the glaciers receive less snow, but so do the areas around them with both good and bad effects on agriculture. The positive effects of longer growing seasons and temporary possibilities of irrigation in these high-altitude farming areas are likely to soon be offset by disappearing glaciers, as greenhouse gases continue to heat up the planet. (tinyurl.com/7r2tpy4s)

Beyond these mountain areas, the flow from these glaciers is essential to feeding river systems like the Ganges, on which millions and millions of people downstream are dependent.

The United States is one of the world’s largest emitters of greenhouse gases, according to the Union of Concerned Scientists. The Biden administration wanted the Senate to pass a bill to seriously reduce this amount. 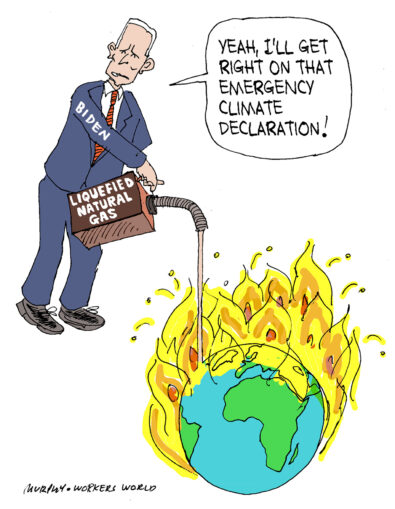 In the grand tradition of bourgeois politics, all sorts of compromises and deals were proposed to get the Build Back Better Act, or indeed any sort of response to the climate crisis, passed.

Without generous tax credits, the transition to electric vehicles would be slowed and the goal of having half the new cars sold in the U.S. being electric by 2030 would not be met. Yet corporate plans go forward to create new and toxic open-pit lithium mines in the U.S. for the needed battery components, despite opposition by affected Indigenous communities, environmentalists and conservationists. (tinyurl.com/yckjnxn3)

The amount of coal used in producing electricity in the U.S. has fallen dramatically, since natural gas is far cheaper. But per capita emissions are far higher than they are in Europe, which uses far more renewable energy sources. China has almost three times the renewable capacity of the U.S.

The changeover to wind and solar power and the improvement of battery storage technology would be completely undercut — “kneecapped” according to the delicate assertion of the American Clean Power Association — while the rest of the industrialized world continues to push their development forward.

But all the entreaties and deals didn’t move the Democratic senator from the coal industry or any Republicans. None of them wanted to risk the ire of their donors or be charged with contributing to inflation by not promoting the production of more oil and gas from U.S. sources.

The reaction in the U.S. environmental movement to this failure to pass the bill was split. The old, established NGOs like the Sierra Club pointed out that the Biden administration still has a lot of administrative options, even though the Supreme Court has reined in the Environmental Protection Agency.

The youth-oriented, grassroots environmental activists in the Sunrise Movement, which attracts folks in Extinction Rebellion, were a bit more radical. They called for elimination of the filibuster and expansion of the Supreme Court to the left.