Union organizers from Starbucks Workers United and the Communications Workers, along with representatives of DSA, met with Spain’s Minister of Labor and Social Economy, Yolanda Díaz Pérez, who also serves as the country’s Second Deputy Prime Minister, in New York City on July 21. 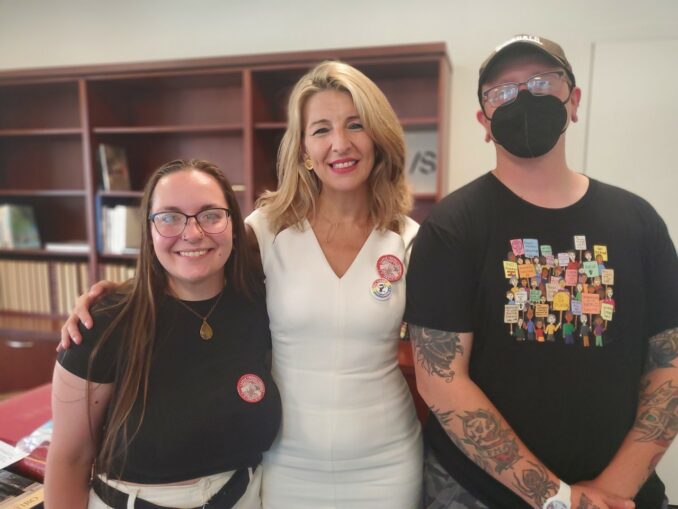 Díaz is a member of the Communist Party of Spain and a leader of the SUMAR (United) electoral platform, which was announced in May as a vehicle to unite progressive forces for their upcoming election. Díaz has focused on the struggle against precarious work as a main goal of her mandate.

The meeting was an informal discussion on ways that Spanish and U.S. workers can learn from each others’ struggles and organizing strategies.

Díaz commented: “The United States is experiencing a new wave of unionization. These are the workers of large companies known worldwide: Starbucks Workers United, Apple Workers Union or Amazon Labor Union. In essence we all want the same thing, something as elementary as the rights of working people being respected.”

U.S. organizers described how the campaigns to unionize Starbucks and Apple began, the difficulties workers faced and the kinds of tactics used to overcome union busting. Of particular interest were the experiences of LGBTQ+ workers, who still face much phobia in Spain, similar to the U.S.

The meeting with young union organizers took place exactly a year after Spain’s Prime Minister Pedro Sánchez met with the top executives of some of these same corporations, like Apple.

“The president met with the companies; I meet with the new unionism,” said Díaz.

The political significance of this meeting is enormous, demonstrating that the new wave of union support in the U.S. has caught the attention of the whole world, as well as opening up possibilities of new international connections for the unions to strengthen global solidarity.

Corporations like Starbucks, Apple and Amazon exploit workers in countries all over the world, so workers must take on a global approach in their organizing.

Starbucks Workers United has already begun planting the seeds of friendship with other Starbucks unions, such as Sindicato Starbucks in Chile and Unite in New Zealand, as well as the Asociación de Trabajadores del Campo in Nicaragua, which represents coffee farmers and other agricultural workers. Starbucks Workers United organizers attended the World Federation of Trade Unions conference in Rome in May; the WFTU represents 92 million workers in 126 different countries.

Starbucks is a corporation with a large presence in Spain, with over 100+ stores. With meetings like the one which Díaz convened, it won’t be long before Starbucks workers are able to come together across national boundaries.

Workers World Party founding member and late Chairperson Sam Marcy said, in “High Tech: Low Pay,” “By virtue of their vast facilities, often in other countries and not unionized, these corporate monsters have gained broad social, political and diplomatic leverage against single unions. These concentrations of capital are classwide organizations to which the workers in the unions have to develop a classwide perspective, nationally as well as internationally, in order to be able to get a firm handle on how to fight the companies . . .

“Even greater is the necessity, even if only in embryonic form, for the absolutely indispensable education of the workers: the development of union consciousness into class consciousness — and with it an appreciation of international cooperation between all the workers.”

The author, who attended this meeting, is an organizer with Starbucks Workers United and a member of Workers World Party.