The response to the Supreme Court decision June 24 to end the legal right to access abortions, denying bodily autonomy of women and other people who can become pregnant, was immediate in Georgia. Mass demonstrations, rallies, marches and a sustained 24-hour-a-day vigil on the Capitol steps drew large numbers of youth, women of all ages, LGBTQ+ individuals and whole families. Black and other people of color initiated and led many actions. 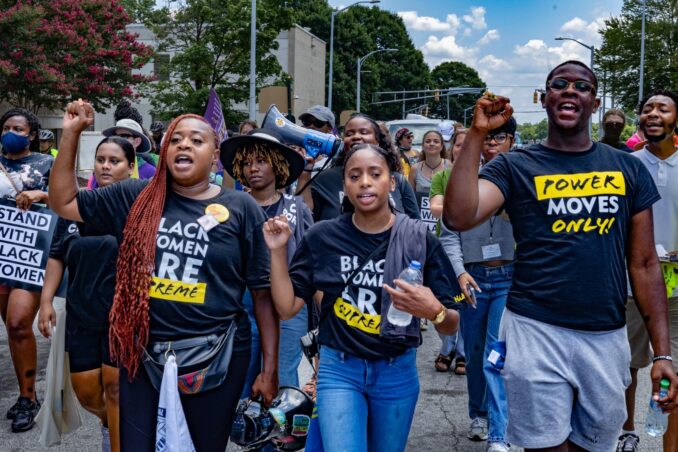 On July 23, the Georgia NAACP and other organizations initiated a march to the state Capitol in Atlanta, highlighting the impact on Black women of the new state law and the Supreme Court decision nullifying legal abortion. (Photo Credit: Georgia NAACP)

In Georgia abortion was legal up to 22 weeks of pregnancy, until July 20 when the 11th Circuit U.S. Court of Appeals ruled that the state’s 2019 so-called “heartbeat law” was legal since the Supreme Court had overturned the legal right to abortion established in the 1973 Roe v. Wade ruling. Similar laws have been passed in other states based on the anti-abortion movement’s false claim that at six weeks of pregnancy, sounds of embryonic electrical activity are actually the sounds of a beating heart. They are not. (NPR, May 3)

Most people are not even aware they are pregnant at six weeks’ gestation. So this ban virtually outlaws abortions throughout the state. Georgia’s law offers some exceptions in cases where the pregnant person’s life is in danger or if the fetus would not be viable at birth. There are also exemptions if the pregnancy resulted from rape or incest — but the assault must have been reported to the police.

However, the Georgia law goes much further than most other state bans and declares embryos have “personhood” rights beginning at conception. This means that an embryo should be counted in population census reports, can be declared a dependent on state income taxes and would be eligible for child support payments. That’s just for starters.

The list of unknown legal issues facing medical practitioners, social service agencies and state, county and city revenue departments, as well as law enforcement, is mind-boggling. Undoubtedly, there will be scores of court challenges to this horrific law, but meanwhile pregnant people will be denied the right and ability to make critical decisions affecting their own lives.

The fear is real that criminal charges could be brought against pregnant people who cross state borders to obtain an abortion. Could people be arrested for having a medication abortion with pills? How long will doctors wait to assist someone having a miscarriage, septic infection or an ectopic pregnancy?

Georgia already has an abysmal record for maternal deaths, especially for Black women. The state is one of 12 that has not fully expanded Medicaid coverage, resulting in millions of residents not receiving basic health services, much less obstetrical and gynecological care. Black women are three times more likely to die because of pregnancy complications than white women; that figure is predicted to rise by an additional 29% with the abortion ban in effect.

Dr. Nisha Verma, a Georgia OB-GYN, testified July 19 before Congress on the impact of eradicating the legal right to an abortion. She stated: “The abortion ban will undoubtedly worsen maternal outcomes in Georgia, forcing doctors to turn away patients we know how to care for.

“Now, doctors are in impossible situations — situations where [Georgia Gov. Brian] Kemp’s law directly violates the medical expertise we gained through years of training and the oath we took to care for our patients. . . . As a provider of comprehensive reproductive health care, I know people are capable of making complex, thoughtful decisions about their health and lives — it’s indefensible that any politician would try to make those medical decisions for them.” (tinyurl.com/3fdut98x)