On July 20 an alliance of Puerto Rican and multinational anti-imperialist organizations led by New York Boricua Resistance (NYBR) gathered in front of DLA Piper in New York City. DLA Piper is one of the law firms that represents LUMA and is connected to the increase in energy prices in Puerto Rico. LUMA is Puerto Rico’s main electric utility company. 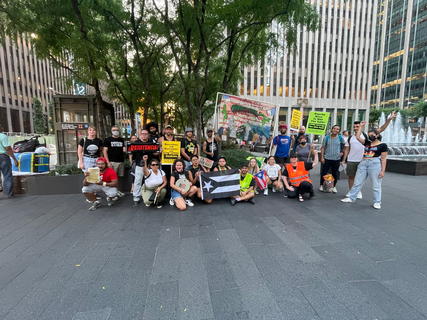 The protest was in solidarity with thousands of Puerto Rican people who mobilized on the island July 20 demanding: 1) zero increases in utility costs; 2) zero cuts to pensions for retired and active electrical energy workers; 3) a reduction in 75% of the debt in bonds; and 4) a push toward renewable energy, such as solar energy. The protest also called for a cancellation of LUMA’s contract and for DLA Piper to terminate its relationship with LUMA.

In Puerto Rico workers from various sectors, multiple social organizations and left- leaning legislators marched in the streets of San Juan, the capital of Puerto Rico, demanding the government cancel the LUMA contract. The Puerto Rican people have been condemning the Canadian-American company for its most recent 17.1% increase in energy costs, while the people are placed at risk of death as medical equipment, food and water are compromised by persistent outages.

Simultaneously, the people are impacted by austerity measures targeting workers’ pensions and an increase in costs of essential necessities such as food and gas.

DLA Piper is a multinational company with offices in over 40 countries whose past invoices reveal charges of over $40,000 for 45 hours for legal and administrative representation. (tinyurl.com/y7s79wmy)

That cry was echoed loud and wide in front of DLA Piper by organizers in NYC. The heat was on as members from the New York Community Action Project, Malaya NY, Lalmorich, Ridgewood Panther Solidarity Organization and Workers Assembly Against Racism, a range of multinational and intergenerational organizations, rallied against LUMA and DLA Piper and as one with the Puerto Rican people.

The NYBR-led protest was endorsed by A Call to Action on Puerto Rico, ProLibertad Freedom Campaign, Workers World Party and International League of People’s Struggles to demand DLA Piper terminate its relationship with LUMA.

NY Boricua’s recent press release highlights that DLA Piper is a tax adviser and lobbies in Congress on behalf of the Puerto Rican government. These vulture capitalists from DLA Piper have described Puerto Rico “. . . as an Opportunity Zone area. . . . We have to be well aware that if we want to bring that capital here, they will be looking at a menu of other options . . .” (tinyurl.com/yckzph2z)

Malaya NY and Lalmorich representatives spoke on the similar struggles faced by Philippine and Bengali people, respectively, noting how U.S. imperialism is the enemy of the people. Organizers compared the struggles of gentrification in Puerto Rico to those in New York City, as housing prices increase and communities are displaced due to gentrification.

Organizers reminded us that the freedom of Puerto Rican political prisoners was fought for by community organizers and of the need to organize and fight. In Puerto Rico and in New York City, the people’s demands are clear: “Fuera LUMA!” “Fuera DLA Piper!” and “Que Viva Puerto Rico Libre!”