Workers World/Mundo Obrero joins with the Cuban people in celebrating the 69th anniversary of an event which changed the course of history for their island nation. On July 26, 1953, Cuban revolutionaries boldly attacked the Moncada garrison in Santiago de Cuba and simultaneously conducted a siege of the army barracks in Bayamo. 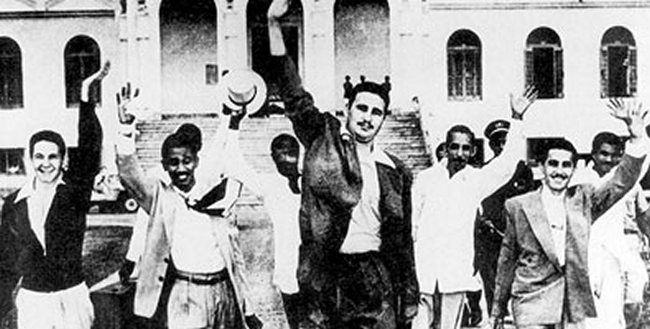 Some of the heroes of Moncada as they were freed from prison by a people’s campaign in 1955.  Fidel Castro, front, center.

These courageous acts were aimed to strike a blow against the brutal U.S.-backed dictatorship of Fulgencio Batista. Although the military goals were not achieved and the struggle suffered a temporary setback, the armed struggle had reached a new stage that continued until the dictatorship was overthrown Jan. 1, 1959. As the guerrilla forces fought in the mountains, an underground movement spread across the country.

Cuba has not only developed in every sphere since the socialist revolution, this island nation has carried out acts of international solidarity to aid oppressed countries in Asia, Latin America, the Caribbean and Africa, whether with military might or medical personnel and supplies. This assistance has been given generously, despite the horrific blockade implemented against Cuba by Washington for over six decades.

Even now during the pandemic, despite having a dearth of medical supplies, Cuba is sharing their COVID-19 vaccines with countries denied them by the imperialist West. Due to the dedication and meticulous efforts of their scientists and health care workers, nearly all of their own population has been inoculated with Cuban-produced vaccines.

In recognition of their heroic work in dealing with this health crisis, 50,000 representatives of the health and science sectors were invited to lead this year’s May Day march in Havana. Cuba’s leaders thanked them for their remarkable work.

Cuba has deservedly won the support and respect of peoples around the globe. Workers World/Mundo Obrero has shown our unwavering solidarity with this socialist country on this newspaper’s pages and in countless activities on the streets.

Since the early 1990s, the fund has helped sponsor the workers.org website. Throughout the pandemic when fewer print issues have been published due to staff health concerns, new articles have been posted daily at workers.org., where the PDF of the weekly newspaper has been displayed. Not one online issue has been skipped throughout this over two-year health crisis.

For a donation of $60 a year, or $120 or $300, you receive a subscription to WW newspaper and one, two or three free subscriptions for friends, depending on donation. A free download of the “What Road to Socialism?” book, published in 2020, is available at workers.org/books. Notify us if you want a paperback book.

Write checks, either monthly or annually, to Workers World. Mail them with your name and address to Workers World, 147 W. 24th St., 2nd Floor, New York, New York 10011. Put “Supporter Program” in the memo line. Or donate online at workers.org/donate/.

We appreciate your help in building Workers World!