According to the U.S. Department of Labor, rising energy and food costs pushed the annual inflation rate in the U.S. to 8.6% in May, the highest rate in 40 years. The following analysis of the causes of inflation is a slightly edited version of an article published by Workers World, Jan. 2, 2022. 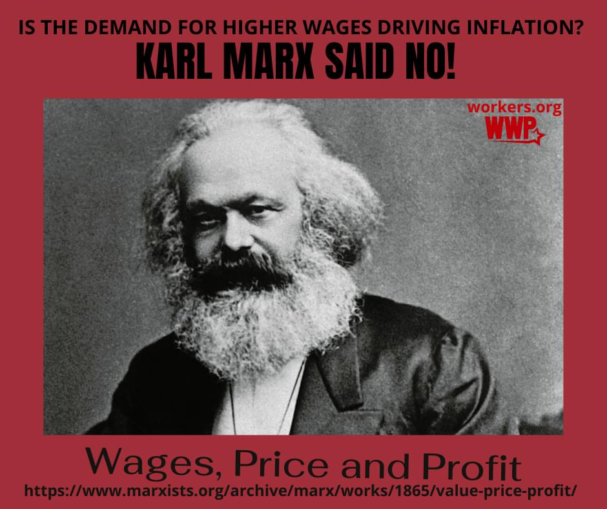 The prices of all basic goods and services necessary for human survival have been going up — in some cases, way up. There is no major city where a person working 40 hours a week at the federal minimum wage of $7.25 can afford a one-bedroom apartment.

This comes in the midst of the ongoing COVID-19 pandemic, a profound crisis of public health made far worse by the for-profit health care system in this country. It has exacerbated the deepening crisis of global capitalism, ushering in a wave of job losses, evictions and more suffering for workers and the oppressed.

The “mainstream” press is filled with a range of supposed explanations to diagnose why inflation has set in so rapidly in the U.S. and similar economies around the globe. But the reality is that none of these explain the root causes of what is driving down the standard of living for millions of workers in this country.

So what’s really to blame for the rise in prices?

Since the 2008 financial crisis, the global capitalist system has been on life support, propped up for the past decade by the central banks funneling unprecedented infusions of money to the commercial banks and financial institutions. In the U.S., the Federal Reserve has pumped upwards of $10 trillion into the financial system and maintained very low interest rates throughout this past decade. It has ramped up this activity during the COVID-19 pandemic.

From 2008 to 2014 alone, the Federal Reserve printed $3.5 trillion (!) in new money — nearly three times the amount the central bank had created since its founding 95 years earlier. During this entire last decade, the Fed has kept interest rates near zero, for a longer period of time than ever before.

When the bank in 2018 tried to begin raising interest rates and scaling back its printing of new money — known as “quantitative easing” — capital revolted. This sent stocks sharply lower and forced the Fed to abandon its plans and return to the regime of near-zero interest rates, thus pumping trillions of dollars into the coffers of the banks and large financial institutions. (politico.com, Dec. 28, 2021)

Several phenomena happened as a result. On the one hand, the amount of money hoarded by the banks and borrowed to speculate in financial markets is at a record high — upwards of $918 billion at the end of November 2021. This is more than double the nearly $400 billion in so-called “margin debt” incurred prior to the financial crisis of 2008.

A report by the McKinsey Global Institute, published in 2021, found that just above two-thirds of global net worth was now stored in real estate, while only around 20% was stored in other fixed assets or means of production. This phenomenon is driving wild speculation in real estate, raising the cost of renting or owning a home and intensifying the familiar scenes of gentrification across the U.S. and the globe. (tinyurl.com/bdf24hmy)

Since 2010, the stock market has doubled in value, during a period of time characterized by permanent unemployment and underemployment, the rise of the so-called gig economy, austerity measures and more suffering imposed on the working class and the oppressed. The superrich have seen their wealth balloon during this period, intensifying the antagonisms between labor and capital and bringing the contradictions inherent in the capitalist system into sharper relief.

At the same time, the number of so-called “zombie companies” — those which hold substantial amounts of debt relative to profit and are thus barely able (or are altogether unable) to pay off their debt — has continued to rise. According to a Bloomberg News report published Dec. 28, 2021, more than 650 of the country’s 3,000 largest corporations are considered “zombie” companies — nearly 22%, or one in every five. Their proliferation has been driven in large part by the Federal Reserve’s policy of making money extremely cheap for banks and large corporations to borrow.

Which brings us back to the question at hand: What’s driving inflation?

For the owners of these companies and financial institutions — the capitalist class — some inflation is a desirable thing. After all, the name of the game for the bosses is expanding profits and beating out rival firms, and higher prices increase profits or otherwise offset any rise in costs of raw materials needed for production, etc. That is what is in play now. Faced with access to easy money to borrow and invest, coupled with higher costs for raw materials based on the various supply chain issues impacting the global economy, bosses are raising prices to protect and, in many cases grow, their profits.

This access to easy money has given corporations the ability to automate production to a higher degree, investing in robots and other technology that enable each worker to produce more commodities. Indeed, the productivity of labor has increased substantially over the past several decades, while the real wages of workers have stayed relatively flat or, in many cases, fallen.

But a curious thing happens as labor becomes more and more productive. Under capitalism, it is the exploitation of labor (or labor power) that creates value. There is a general tendency then for the value of commodities to decline over time as the supply of those goods rises, based on less human labor being needed to produce them.

The argument by many mainstream economists and CEOs — that growing demands from workers for higher wages, especially among the lowest-paid workers, is driving or even contributing to inflation — is categorically false.

Karl Marx disproved this theory in his groundbreaking work “Value, Price and Profit,” noting that “a struggle for a rise of wages follows only in the track of previous changes and is the necessary offspring of previous changes in the amount of production . . . in one word, as reactions of labor against the previous action of capital. . . . A general rise in the rate of wages would result in a fall of the general rate of profit but not affect the prices of commodities.”

Out-of-control inflation, however, can become undesirable for the capitalist class. It can lead to ballooning costs of raw materials — and even more dangerous, to the tightening of monetary policy, making access to borrowed money more expensive.

If this were to happen, which is what the Federal Reserve and other central banks are currently considering, it could usher in a wave of defaults and bankruptcies, triggering another financial crisis and an economic decline that would affect the global economy. It would be managed by trying to extract even more concessions from the working class and the oppressed.

It is the preferred policy of the federal government and central banks to use various monetary policy tools at their disposal to control rampant inflation. But it wasn’t always this way.

After the end of World War II, the United States experienced a similar period of high inflation. At that time, there was a militant and growing workers’ movement in the streets, fighting for various social reforms, building unions, conducting strikes and more.

Rather than utilize monetary policy tools to deal with inflation, the federal government enacted price controls. In the early 1970s, similar measures were again implemented to deal with rising inflation.

But starting in the late 1970s, roughly coinciding with capital’s renewed offensive against labor, there was a shift toward the monetary policy route as the ruling class’s preferred method to deal with inflation, and that has been the case ever since. The Federal Reserve at that time raised interest rates through the roof, exacerbating a punishing recession in the economy.

Things are different now, both in terms of subjective factors like the level of worker organization and consciousness, as well as objective factors regarding development in the global capitalist economy.

It’s too early to say where inflationary trends will head and with what method the federal government and central banks will choose to respond. The newly combative attitude of workers, forced to stay on the job throughout the pandemic, exposing themselves and their families to the risk of COVID-19 while earning small change, compared to the billions raked in by the companies they work for, will play a decisive role going forward.

Workers on the move

This growing workers’ movement could raise demands for a price freeze, higher wages, an end to evictions, free health care, an end to the war on migrant workers and other pro-worker initiatives to address the increasingly dire conditions facing our class and the most oppressed.

The Federal Reserve and the federal government have bent over backwards to hand out tens of trillions of dollars to the banks and large corporations. Each year, they spend upwards of $1 trillion on the Pentagon, funding U.S. wars abroad in the interests of capital.

During the pandemic, the federal government imposed pauses on or altogether forgave various debts held by workers, implemented an eviction moratorium, gave stimulus payments directly to workers and took other measures to alleviate the public health crisis. Altogether, this demonstrates that the money is there to implement programs and policies that benefit the vast majority of society versus the interests of the rich. What has been missing is a mobilized and militant workers’ movement to fight for it.

But that is changing.

As another deep and protracted crisis of the capitalist system looms, it is imperative for the workers’ movement and its most revolutionary elements to find ways to intervene.