A global economic crisis is emerging, and for readers of Workers World, this comes as little to no surprise.

As Marxists and dialectical materialists, we are cautious about making predictions. It is no secret that corporations are bragging about record profits at the same time working people are struggling to afford groceries, gas, baby formula and other necessities. A recent study reveals that “corporate profits rose 35% during the last year and are at their highest level since 1950. Inflation, meanwhile, rose to 8.5% year over year in March.” (Guardian, April 27)

There is a bourgeois myth that “workforce shortages” exist because “people don’t want to work.” The reality is, most people cannot afford to work in dangerous conditions for menial pay. Many employers are offering small hiring incentives, but few are attracting people who are trying to make ends meet, especially those, mostly women, who can not find affordable child care.

Despite these hiring incentives, bosses are always seeking ways to “cut costs” to enhance their profits, and that includes layoffs and deliberate understaffing of the labor force. The billionaire class wants to squeeze out as much labor as they can, from as few workers as possible. Intentional understaffing is and has been particularly common in the health care and service industries in the U.S. 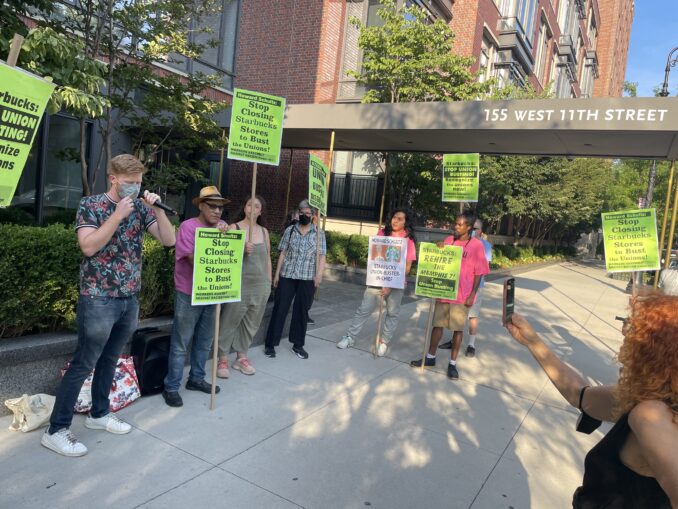 In “Capital,” Karl Marx notably wrote, “Capital is dead labor, that, vampire-like, only lives by sucking living labor, and lives the more, the more labor it sucks.”

The capitalist class’s current “solution” to the very inflation and staffing crisis their profit-driven system created is to raise interest rates. In mid-June the Federal Open Market Committee raised its key interest rate by 75 basis points, which is its largest rate increase since November 1994. (Forbes Advisor, June 15) The “logic” behind boosting interest rates is based on a deceptive prediction that people will spend less, and that should somehow reduce inflation.

Working and oppressed people, particularly the youth, are the ones expected to suffer most because of higher interest rates, which will impact mortgages and student loans. According to freelance writer and business analyst Mary Hall, “. . . as interest rates rise, many investors believe growth stocks [will] come to appear less favorable, because their long-term discounted cash flow is reduced and their ability to [secure] low-cost debt financing is more difficult.” (Investopedia June 22)

The fluctuation of interest rates by the Fed is a game that has historically been played by the billionaire class at the expense of the working class and nationally oppressed people.

In his 1845 book “The Condition of the Working-Class in England,” Friedrich Engels coined the phrase “reserve army of labor,” a term Marx would often use to describe the segment of unemployed and underemployed workers that would inescapably emerge during the “recovery” after capitalist crises throughout the 19th and 20th centuries.

Workers World Party founder and chairperson Sam Marcy warned in 1992: “Today the pool of unemployed threatens to become an ocean. And even if there is a recovery and a phase of so-called prosperity, this ocean of unemployed will be wider and deeper than in any previous upturn.”

With the U.S. imperialist state in financial disarray, especially with its proxy war against Russia where the U.S. has spent tens of billions of dollars in a matter of months, there may not be a recovery following the next economic bust. This will likely result in a new vicious assault on the working class.

Workers fight back around the world

On the upside, October 2021 saw an impressive wave of strikes throughout the world and in the capitalist U.S. The combination of collective labor actions became known as “#Striketober.”

According to the National Labor Relations Board, union representation petitions filed between October 2021 and March 2022 at the NLRB increased 57% from the same period a year earlier. Workers at over 300 Starbucks stores have filed petitions to be exclusively recognized by Starbucks Workers United, and over 50 locations have successfully organized. In a vicious response, Starbucks CEO Howard Schultz has been trying to use divisive union-busting tactics to discourage future SWU union drives.

Amazon warehouse workers in Staten Island, New York, recently voted to be recognized by the newly formed Amazon Labor Union, and many other locations are hoping to follow suit. At the same time, ALU is currently being held hostage by Amazon in ongoing NLRB hearings in Phoenix over Amazon’s bogus “objections” to the union win. Much like Starbucks boss Schultz, Amazon CEO Jeff Bezos is determined to break the ALU and its organizing campaigns.

Amazon workers at the DTG5 Warehouse in Atlanta, Georgia, walked off the job to demand better pay on Prime Day, July 13. Amazon’s $33.36 billion profits in 2021 came from workers’ unpaid labor.

As higher-paying union jobs have deteriorated over the decades, low-wage jobs that are predominantly nonunion have expanded. The union victory of ALU, led by its president, Chris Smalls, has been inspiring for many young people, especially nationally oppressed and LGBTQ2S+ youth, as well as people who do not feel welcomed by, or see themselves as part of, the official labor movement.

The fact that the ALU was not formally honored at the recent AFL-CIO convention, held June 12-15 in Philadelphia, speaks volumes. Fortunately, at the Labor Notes convention held in Chicago just a couple of days later, ALU leaders were given the same honorable recognition as the militantly progressive Association of Flight Attendants-CWA President Sara Nelson and recently elected Teamsters President Sean O’Brien.

Workers around the world have been in motion. Over 200 million workers and farmers carried out a two-day strike in India March 28-29. The strike was conducted under a joint platform of the various central trade unions, most of which are affiliated with the Communist Party of India, the Communist Party of India (Marxist) or the Socialist Unity Centre of India (Communist).

Rail workers in England, Wales and Scotland went on strike in late June to protest job cuts, speedups and lack of a significant pay raise. The British ruling class was fearful the strikes would spill into other industries, as indicated in frantic headlines of bourgeois publications. French rail workers went on strike in early July for similar reasons as their English, Welsh and Scottish counterparts.

Fed up with food and medicine shortages, workers and farmers in Sri Lanka have been holding massive protests since the beginning of 2022. On July 9, tens of thousands of protesters stormed the palace of President Gotabaya Rajapaksa, forcing him to step down.

There are many other examples of workers fighting back against the conditions being brought on by the global recession.

In a recent summation of the financial catastrophe, “The Working Class and the Global Capitalist Crisis,” WWP First Secretary Larry Holmes posed key questions: “So will the economic crisis take the steam out of the worker organizing? Or will it make workers more angry, maybe even make them more revolutionary? These are questions that we have to take very seriously.

“Because, comrades, whether it’s up or down, whether they win or lose, whatever gains the workers achieve through the struggle, those can never be permanent under capitalism.” (workers.org, May 27)

To ensure that the material gains being won through mass struggles are not reversed by the ruling class, we must push the working-class movement toward a revolutionary socialist path. It is crucial we welcome and invite workers who have traditionally been excluded by the trade union bureaucracy, such as sex workers, gig workers, prisoners and people formerly incarcerated, into the movement for revolutionary change.

Unions in many countries are affiliated with socialist, communist and sometimes revolutionary parties. In the U.S., on the other hand, most unions are bound to the Democratic Party. Red-baiting and the Taft-Hartley law’s anti-communist clause drove communists out of the labor movement in the late 1940s and early1950s. Prior to McCarthyism, communists inside many U.S. unions, especially those affiliated with the Congress of Industrial Organizations (CIO), employed a strategy known as “class-struggle unionism.”

Class-struggle unionism strives to give leadership power to the rank-and-file and avoid the class-collaborationist tactics of “business unionism.” Class-struggle unionists epitomized the most militant, class-conscious and anti-racist labor agitators, who prioritized organizing women, immigrant and nationally oppressed workers — those shamefully ignored by conservative elements of the labor movement.

One way workers are coming together in an inclusive and revolutionary manner is through workers assemblies, bringing organized and unorganized workers together. Workers assemblies advance class consciousness and class unity, in some ways similar to how the soviets, i.e., the “workers’ councils,” did in bringing about the Bolshevik Revolution of 1917.

Workers assemblies also connect different issues that are tied to capitalism and imperialism. One powerful example is the Southern Workers Assembly, which features class-struggle unions, rank-and-file leaders of other unions and nonunion activists who are organizing the predominantly nonunionized South. SWA is active in many struggles against racism and social injustice.

Workers assemblies can fill the void in the U.S. labor movement. There should be calls for mass rallies by the AFL-CIO and SEIU to defend ALU and SWU, but that is not happening. Instead, the national leaderships of most major business unions are once again urging people to “respect the process” and “vote Democrat.”

Workers assemblies can call for much needed direct action and do not need to rely on the bourgeois courts or electoral system.

Workers assemblies are crucial in combating the fascist rot that has been spreading in the United States. Fascism — which relies upon the vilest forms of racism, sexism, anti-Semitism and anti-LGBTQ2S+ bigotry in order to exist — is a poisonous product of dead-end capitalism that often appears in times of crisis. Fascists will target oppressed people.

In his conclusion, Holmes declares, “All the issues are tied together. And what ties them together is the class struggle. We must have a perfect working-class strategy going forward. Because that class strategy is the only strategy capable of defeating war and fascism and ultimately bringing about communist revolution.”

For more Marxist analysis on inflation see, “Why is everything so expensive?” Workers World, Jan. 3, 2022.