“Say his name! Jalen Randle.” This chant went on for over 45 minutes, on the way to and outside of the downtown Houston Police headquarters. The crowd had marched from City Hall, and their chants were echoing off the skyscrapers.

Randle’s parents and family members were joined by 50 friends 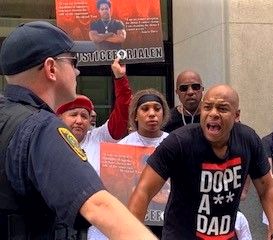 and activists July 2 to protest this latest cop killing in Houston. They were demanding the firing and arrest of the cop who murdered their son.

Jalen Randle, a young Black man, was assassinated by a cop who was chasing him on foot on April 27. The cop, Shane Privette, pointed his gun at Randle and gave him commands to show his hands. The camera worn by Privette shows the officer getting out of his vehicle, giving a command to Randle but then shooting him in the back of the neck before finishing his sentence.

When Randle fell to the ground, Privette shouted, “Oh shit!” Randle’s body was then handcuffed and dragged to the sidewalk. In comments captured on the body camera video less than a minute before the shooting, Privette said, “He ain’t leaving this neighborhood alive.”

During a press conference outside the District Attorney’s office in early June, civil rights attorney Ben Crump said, “The release of this footage, while heartbreaking for the family of Jalen Randle, gives us a clearer picture of what happened to Jalen in his final moments. The brutality displayed in this video is extremely disturbing — from the officer firing a deadly shot, seemingly as he ordered Jalen to put his hands up, to the way they handcuffed and dragged his lifeless body across the ground.” Crump was hired by Randle’s family to investigate his death.

Much of the press conference covered Officer Privette’s prior uses of force. He was indicted by a grand jury in 2017 for allegedly kneeing a Black drug suspect in the face. Those charges were thrown out, but a federal civil suit related to the incident is ongoing.

The crowd demonstrating at the police headquarters July 2 was so militant that many dozens of police surrounded the protest. Randle’s father put his face into the faces of the cops, all the while loudly chanting his son’s name.

“I’m furious; I am furious. I’ve cried all I can,” said Tiffany Rachel, Randle’s mother. “Now I need to tell y’all that I am mad, and I need to get justice for my child.”

She announced that they would be holding a town hall meeting soon.