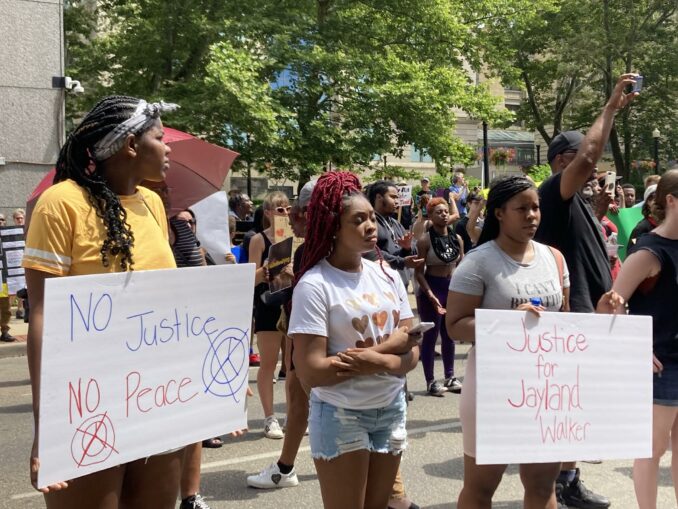 The racist police lynching of Jayland Walker in Akron, Ohio, on June 27 sparked a wave of protests that shows no signs of letting up. Walker, a 25-year-old Black man who worked as a DoorDash driver, was shot around 60 times by eight police, who fired 90 shots as Walker fled on foot from the scene.

The city administration, which has yet to release the names of the murdering cops, has instead imposed harsh repression against activists. Dozens of protesters have been arrested and brutalized, while a curfew in downtown Akron remains in effect as of this writing.

About 50 peaceful demonstrators were arrested July 4 — so-called “Independence Day” — after being tear-gassed and confronted by cops in riot gear and armored vehicles. Charges include rioting and disorderly conduct. Northeast Ohio progressives mobilized solidarity, providing jail support and within days crowdsourcing all the funds needed to post bond for everyone arrested.

In a video interview, one arrested person described seeing activists visibly injured, including one with an apparent dislocated shoulder, who was not receiving medical attention. The interview revealed that protesters were at one point shackled together at the ankles. When the Summit County jail in Akron was filled to capacity, some people were transferred out of the county to the Stark County jail. Upon release, a number of people were driven around Akron by sheriffs, who then dumped them at remote locations.

Seven more people were arrested and assaulted on July 6. By this time out-of-state activists had traveled to Akron to show solidarity with Walker’s family and the Akron community. Among the arrested were Bianca Austin, aunt of Breonna Taylor, who was murdered by Louisville, Kentucky, police in 2020 and Jacob Blake Sr., father of Jacob Blake Jr., shot and paralyzed by Kenosha, Wisconsin, cops in 2020.

Beaten by Akron police and suffering a seizure that required hospitalization, Blake Sr. spoke at a July 9 rally: “When I woke in the hospital, I was more determined than ever. We cannot let fear dictate what we do. . . . We refuse to be stepped on any more!” (Akron Freedom BLOC)

As Ohio’s Black Lives Matter movement grows in numbers and militancy, the repressive arm of the white-supremacist ruling class continues to flex its muscles. The Ohio House passed House Bill 109, which lets police arbitrarily categorize a protest as a “riot.” HB 109 creates new “crimes” for participants in such protests.

After the arrests of Blake, Austin and others, the Akron Freedom BLOC (Black Led Organizing Collaborative), Serve the People Akron and Akron Democratic Socialists of America held a joint news conference to release 12 demands:

“The Establishment of an Independent Truth and Reconciliation Commission to investigate Jayland Walker’s murder and others killed by the Akron Police Department; release the names of all officers involved in the murder of Jayland Walker, cut their administrative leave, fire them, prosecute them immediately; abolish the deployment of tear gas, pepper spray, rubber bullets in City Code Section 35.17; disarm any police or security forces deployed to meet protests or assemblies; release all memorandums of understanding and current, in-place contracts between the City of Akron and the Fraternal Order of Police Lodge 7 and Regional Branch of the Fraternal Order of Police;

“Release a financial breakdown of all expenditures of dollars and contracts executed to meet protestors and assemblies over the last week; legislate the abolition of curfews; legislate the abolition of police chases, eliminate traffic stops for all traffic violations; legislate the immediate release of officer-involved incidents; stop arresting peaceful protestors, immediately release all protestors from all jails and holding institutions, expunge the records and clear the bail and fines of all those arrested for protesting over the last week; create a Citizens Review Board for the police, with power to subpoena and members selected strictly by local organizations; and create a Citizen-led Commission to study and strategize the defunding and abolition of the Akron Police Department, municipal holding centers and jails.” (list abridged)