Despite ferocious union-busting attacks, Amazon workers continue to organize and move forward — with recent noteworthy progress from the U.S. South to the Mexican border.

On July 7, More Perfect Union broke the news on Twitter that workers at Amazon warehouse SDF1 in Campbellsville, Kentucky, are affiliating with the Amazon Labor Union.

On April 1, the ALU, under Black leadership, won a historic victory as the first Amazon union in the U.S. to win an NLRB-supervised election, at the Staten Island, New York, JFK1 warehouse. Yet Amazon refuses to recognize the ALU, despite the lopsided vote in the union’s favor. The company has filed 25 “objections” with the NLRB in an attempt to have the vote thrown out, subjecting union leaders to a torturous hearing far away in Phoenix, which has dragged on for weeks.

The Kentucky Amazon facility, which employs about 1,000 people, was one of the first Amazon warehouses built in the U.S. About 600 of the workers are eligible to vote in the National Labor Relations Board election.

Matt Littrell, 22, a picker at SDF1 and chair of the local organizing committee, said workers there are making “good progress” building support and could petition the NLRB for a vote “maybe within the next six months.” (wdrv.com/news, July 7)

Charges against Amazon for union-busting activities were filed May 6 on behalf of the Campbellsville workers, including for coercive actions like surveillance and illegal “changes in terms and conditions of employment.”

Inspired by the ALU, Amazon workers launched a union drive in March at the RDU1 warehouse at Garner, North Carolina, in the Raleigh-Durham area. Organized as CAUSE (Carolina Amazonians United For Solidarity and Empowerment), workers are dynamic on the ground and on social media, pointing out that Amazon pays workers so little that some workers have to sleep in their cars.

On July 6, in the organization’s Twitter video, Amazon worker “Darren” said that RDU1 reminds him of his time in prison, “from the constant surveillance, short breaks, harassment of racist security guards, to the cheap labor.”

In March just before the ALU’s epic New York win, Amazon workers in Bessemer, Alabama, voted for the second time on whether to become a local of the Retail, Wholesale and Department Store Union. In February 2021, those BHM1 warehouse workers were the first to hold a NLRB union election at an Amazon facility in the U.S. Bessemer, an old steel-producing and labor union town, adjoins the city of Birmingham.

Despite the initial loss, workers continued to relentlessly organize. The 2022 March vote in Bessemer was so close, the outcome is still undecided as of July, with disputed ballots to determine the outcome.

Solidarity across the border 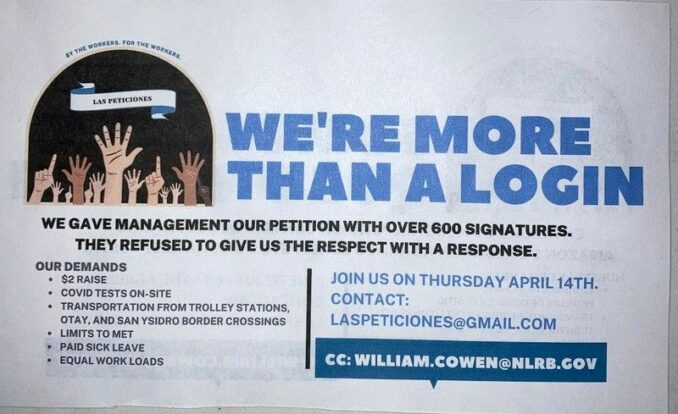 Amazon warehouse workers who have had to commute as much as five hours a day on foot, from Tijuana, Mexico, to the SAN3 warehouse in San Diego, have initiated independent worker-led actions, winning some concessions from the company. (Vice, July 8, tinyurl.com/45a34aam)

About 1,500 people work at the warehouse near the Otay Mesa, California, border crossing, the majority of them coming to work from Mexico. Since September 2021, when the facility opened, workers have demanded a $2-an-hour raise, transportation from the border, limits on mandatory overtime, more break time and onsite COVID-19 testing.

After the company ignored a March petition, the group Las Peticiones formed to push for worker demands. In April they won free daily bus service from the border to the warehouse, paid for by Amazon.

Organizing continues for the workers’ other demands in the independent union pattern first initiated in 2018 against Amazon at the Fulfillment Center in Shakopee, Minnesota, half an hour from downtown Minneapolis.

There Amazon warehouse workers from the Somali community became the first to successfully push Amazon to bargain over working conditions, such as prayer rooms for Muslim workers and reduced productivity quotas during Ramadan. Those Shakopee warehouse workers went out on strike against Amazon on Prime Day in 2019. (See “‘We are not robots!’ Somali workers back down Amazon,” Workers World, Dec. 22, 2018. tinyurl.com/yc5sxhku)

Workers are on the move throughout Amazon in the U.S., increasingly winning through the international character and growing solidarity of the working class. Follow Workers World for news on more developments — and more victories.

The ALU has asked supporters to attend the virtual NLRB hearing in solidarity. Register at tinyurl.com/msc2cakk