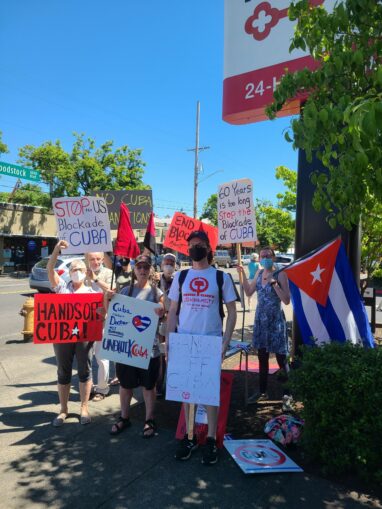 Portland activists have held monthly protests since January demanding an end to the U.S blockade of Cuba. This month’s June 26 protest is part of a growing international movement involving 20 cities in the U.S., seven in Canada and many more worldwide. The goal is to raise public consciousness, build solidarity and put pressure on the U.S to end the 60-year-old imperialist blockade. Since its beginning in January, the Portland End the Blockade of Cuba Committee has grown to include 10 local organizations.

President Joe Biden’s administration has been forced to respond to the growing pressure to end the blockade and to international political isolation. Biden has recently made it easier to travel to Cuba and for Cuban-Americans to send money. However, the brutal economic blockade remains unchanged.

As Danny O’Brien wrote in Workers World Feb. 10, “Cuba has been under a devastating economic blockade since Feb. 3, 1962, as U.S.-dealt punishment for its people’s liberation. Food, medicine and other vital resources are forcibly withheld from the small island nation; and all trade with the U.S., its allies or client states is strictly forbidden. Each time it has come to a vote in the U.N., the nations of the world have voted against this blockade, but each time the United States has kept on with aggression and obstinance.”