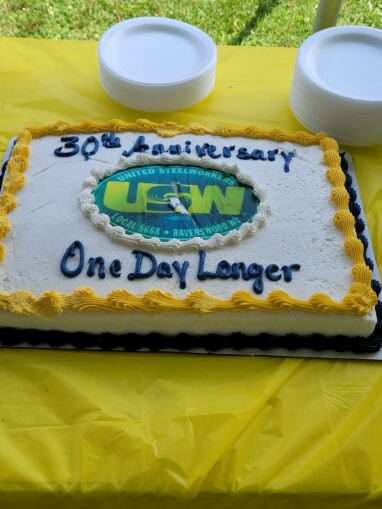 A cake at a commemoration to honor the West Virginia workers who held out “one day longer” than Ravenswood Aluminum from 1990-92. WW Photo: Otis Grotewohl

Members of United Steelworkers (USW) Local 5668 commemorated the 30-year anniversary of the nearly two-year lockout at Ravenswood Aluminum Corporation on June 25. The commemoration was held at the Local 5668 union hall in Ravenswood.

From October 31, 1990 — the date the contract between RAC and Local 5668 expired — until June 29, 1992, roughly 1,700 workers were locked out, after the company refused to listen to concerns over health and safety. Several workers at the plant had died from severe heat exhaustion during the summer of 1990.

A popular slogan derived from that struggle, which has been widely used in other labor disputes with mixed success since then, is “One Day Longer.” A member in the crowd told Workers World, “The phrase was coined when one of the Local 5668 leaders stated, ‘We will last one day longer than the company.’”

During the time of the lockout, RAC was owned by international hedge fund manager Marc Rich. Rich was a notorious white-collar criminal, who fled to Switzerland to avoid prosecution for tax evasion and later received a pardon by then-U.S. President Bill Clinton in January 2001.

In their book “Ravenswood: The Steelworkers’ Victory and the revival of American Labor,” Tom Juravich and Kate Bronfenbrenner write about how officials of Local 5668 networked with unions from other countries, such as the Swiss Metalworkers and Watchmakers Union. That union confronted Rich when he attended private business meetings in Switzerland.

The 20-month long battle was bitter and militant. The community was divided, and violence broke out from both sides. Many small businesses took open stances in the dispute, and union people would patronize some businesses and boycott others, while the company people did the same thing. One heroic picketer was wrongfully prosecuted for allegedly setting off a pipe bomb. Some people who crossed the picket line had the word “scab” painted on their houses.

Workers World spoke with area labor activist Denny Longwell, who served as Vice President of USW Local 5760 for several years at another aluminum plant across the Ohio River in Ohio. Local 5760 members provided a lot of solidarity and support to their locked-out siblings in Local 5668.

Longwell told WW, “The Women’s Support Group sent a strong message to the company that they picked a fight with not only the Steelworkers, but their families too.”

Another person, who wished not to be identified, jokingly told WW, “Members of the Women’s Support Group learned the hard way that one should not keep spray-paint cans in the trunks of cars in 90 F weather.”

Most of the workers who were locked out are now retired, but it was apparent at the commemoration that they remember the battle like it was yesterday. Several speakers shared memories of the fight, often pointing out it was an “illegal lockout” by the company.

Speakers included USW International President Thomas Conway, West Virginia AFL-CIO President Josh Sword and USW District 8 Director Larry Ray. Sword informed the crowd he spoke with Jim Bowen, who had served as USW District Director of District 23 and was one of the chief contract negotiators on behalf of the union. Sword stated, “According to what Jim [Bowen] told me, there are five things that helped win that fight: international labor solidarity, community support, bravery, creativity and perseverance.”

There was a display of photographs and newspaper clippings from the time, along with a collection of jack rocks mounted on a plaque. Refreshments were provided, including sweet tea, lemonade and two cakes with the union’s logo.

The aluminum plant has changed ownership and names a few times since the lockout, but it is still represented by USW Local 5668. The union struck over health care and wages in 2012, and coverage was provided in the pages of Workers World newspaper.

Historic lessons of the two-year lockout should be studied by anyone interested in fighting for better conditions, including the incarcerated. The workers showed that even under the most miserable circumstances, they can hold out “one day longer” than the bosses, so long as they stay united. It was especially difficult for those who had to remain principled and loyal to their class, when some of their own family members were not.

The 30-year anniversary coincides with a current lockout of 250 Collins Aerospace workers in Union. Represented by USW Local 1449, they are entering their sixth week of being locked out, after turning down a rotten contract offer regarding pay and increased health care costs.

The veteran members of USW Local 5668 can teach us all how solidarity can help us defeat even the sleaziest of the 1%, when we remain united and refuse to give up the fight.