On June 24, the Supreme Court of the United States dealt a stunning blow to over half the country’s population when it overturned the right to access legal abortions, granted by the top court 49 years ago in the precedent-setting Roe v. Wade ruling. The court’s reactionary majority has denied women and all people who can bear a child equality, bodily autonomy and the right to make medical decisions. 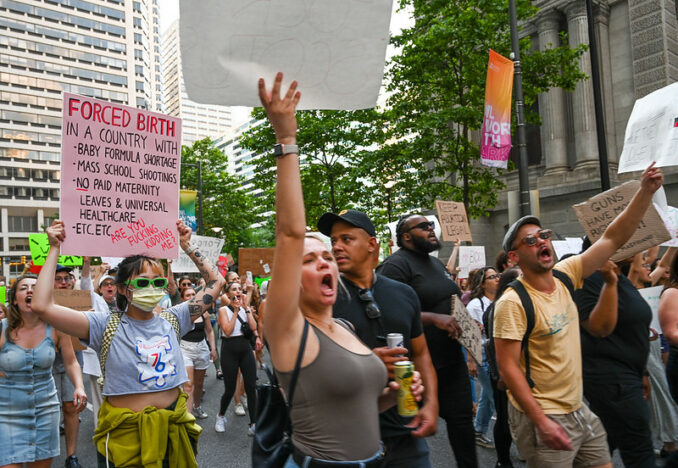 The dissent from Justices Stephen Breyer, Sonia Sotomayor and Elena Kagan asserts the Court’s ruling means: “[F]rom the very moment of fertilization, a woman has no rights to speak of. A State can force her to bring a pregnancy to term, even at the steepest personal and familial costs.” In essence, these unelected “justices” ruled that once a woman is pregnant, she loses independence and becomes subordinate to the state. Her choices are gone.

Pushed by the Republican right, 26 states have enacted abortion bans, with 13 passing trigger bans; several went into effect when the Dobbs decision was announced. At clinics in Texas and other trigger states, desperate women were awaiting abortions when the news came down; they had to leave immediately. Many essential health centers stopped providing abortions or closed that day.

This horrific racist, sexist, classist ruling infuriated women and people of all genders across the county. Immediately, protesters amassed outside SCOTUS, while thousands more gathered in downtown Washington, D.C. Chants rang out: “We can’t go back! We will fight back!” and “Legal abortion on demand.” One group chanted “Ain’t no justice in this town!” A veteran of the earlier pro-choice struggle told everyone, “Don’t agonize! Organize!”

Tens of thousands marched in multinational, multigender, multigenerational demonstrations across the width and breadth of the U.S.— in too many places to list, from big cities to little towns.

As protesters assembled outside the state senate in Phoenix, police tear-gassed them. Ten people were arrested in a “night of rage” in Eugene, Oregon. Coat hangers mysteriously appeared at the capitol building in Madison, Wisconsin, a state with no abortion facilities. Signs in Salt Lake City, Utah, read: “We need a mass movement to protect abortion rights!”

SCOTUS’ unjust, cruel ruling will disproportionately impact Black, Brown and low-income communities. Monica Simpson, director of SisterSong, a women of color Reproductive Justice collective commented: “Rolling back abortion rights is another example of white supremacy in America that’s played out in other facets of society. This is not just about abortion. These attacks are about their desire to stay in power. But this moment has given us the opportunity to build our collective power!” (SisterSong, Facebook)

And what is the Democratic Party leadership doing? Wringing their hands and encouraging people to vote for their candidates in November’s elections. By then, how many pregnant people will have traveled hundreds, maybe thousands of miles for safe abortions? How many will have suffered injuries or even died from botched abortions? How many victims of rape and incest, including children, will be forced to carry a pregnancy to term? How many parents living paycheck-to-paycheck will have to bear another child at great personal cost?

President Joe Biden pledged that medication abortions will be available in every state, as federal approval preempts state restrictions. But several states are banning pills as well as surgical procedures. Will the administration prevail on this? Why hasn’t Congress codified abortion rights?

Women, LGBTQ, intersex, and Two Spirit people, people of color and their allies are fed-up with Democrats’ talk and little, if any, action. Many activists are asking what these politicians are doing to help. They know voting won’t stop the far-right misogynists who are hell-bent on obtaining a national abortion ban and eradicating other hard-won rights.

Many women are realizing what their sisters knew 50 years ago: Militant struggle is needed. Many have learned lessons from the Black Lives Matter movement and are now learning from workers’ unionization campaigns.

Political consciousness is growing. Many activists now recognize that it’s the capitalist system that is obstructing their rights — and that they can’t rely on the government to protect them. To win, they must mount a strong, unified, independent fighting movement with all oppressed peoples, workers, those of all genders and all progressive forces.

A mass of protesters converged on Boston’s streets for three consecutive emergency marches, asserting “We won’t go back!” They chanted “Hey, hey, ho, ho, the patriarchy’s got to go!” The multinational, multigendered, multigenerational protesters affirmed that abortions are safe, essential health care and asserted that the system and SCOTUS must go. Their message was “Abortion on demand without exception ‘by any means necessary!’”

An angry crowd of 20,000 people converged for a rally at Washington Square Park, New York City. Speakers denounced the SCOTUS ruling and called for continued resistance. “F**k the Supreme Court!” was a favorite chant in the very militant march that followed, joining a rally organized by Planned Parenthood at Union Square. Thousands continued the march north to Times Square and beyond, for hours into the night. At least a dozen protestors were arrested holding the street in front of Fox News.

More than 150 people filled the Village Green on Tinker Street and Mill Hill Road in rural Woodstock, New York, to protest, expressing their anger with homemade signs to “abort the court.” Along with veterans of the women’s movement were young people, all cheering a call for a women’s strike.

Over 200 people gathered to chant “We dissent!” to the SCOTUS decision at the James M. Hanley Federal Building in Syracuse, New York. The angry crowd represented the full range of the community — from older National Organization for Women activists to wiccans, antiwar protesters, LGBTQ+ youth, Black community leaders, City Council members and representatives from the city’s im/migrant communities. Latinx support was visible on pink shirts with the slogan “Juntos con Planned Parenthood.”

Hundreds of protesters took to the streets in Buffalo, New York, carrying signs “We will not comply,” “Abolish the Supreme Court!” and “We will aid and abet abortions!” Speakers emphasized that abortion is a workers’ issue and that there is a need to create a fighting pro-choice movement outside of the Democratic Party. Another central theme was the importance of defending abortion for people of all genders, including trans men and nonbinary people.

Pro-choice residents of Delaware County, a Philadelphia suburb, gathered at the county courthouse steps in Media, Pennsylvania. The protest drew a multigenerational, multinational crowd of at least 500 people. Most speakers emphasized the need to vote for Democrats, however, despite how ineffective that has been in moving an agenda that protects the working class.

Highlights came from Delco Resist organizers, who called the action and who stressed the high maternal mortality rates among Black and Brown people and the escalating threat to LGBTQ+ communities. Juli Avalos, executive director of Domestic Abuse Project of Delaware County, cautioned that incidents of partner violence will increase where abortion access is outlawed.

Close to 10,000 participants joined in the largest pro-choice rally in Philadelphia in decades. By early evening, the plaza around City Hall in Center City was packed with crowds. By the time the march kicked off after a short rally, the surrounding streets were filled with protesters.

Marchers circled City Hall, then went down Market Street to the Liberty Bell and Independence Hall. But demonstrators did not stop there; they continued traversing the city streets, particularly in heavily populated restaurant areas, well into the night. Popular chants were “Abort the court!” and “Ban off our bodies!”

Within hours of the announcement of the SCOTUS overturn of Roe v. Wade, multiple protests were held in Atlanta and its suburban cities, as well as towns large and small across Georgia. Thousands of enraged youth and longtime reproductive rights activists of all nationalities and genders took to the streets of Atlanta and gathered at the CNN Center and the state capitol building. Some carried signs of organizations, but most had written their own messages on poster boards — showing defiance, anger and determination to secure their rights and protect their bodies.

At government buildings, town squares and press conferences across Georgia, representatives of prominent women’s health organizations, elected officials and faith-based leaders denounced the ruling and vowed to continue the effort to ensure full bodily autonomy to everyone capable of becoming pregnant.

Abortion is still legal in Georgia. But the six-week abortion ban, the so-called “heartbeat” bill, which has been held up in federal litigation for three years, is expected to become state law. The Atlanta City Council and numerous district attorneys have declared they will not prosecute violations of the law.

People have been in the streets in Cleveland since the dastardly decision to overturn Roe v. Wade. The Democratic Party Women’s Caucus for Cuyahoga County held a rally to try to calm the righteous anger of women, gender-oppressed people and male allies. Over 1,000 people came, yet many carried hand-lettered signs indicating they were ready to go beyond a call to simply “get out the vote.”

In Portland, Oregon, thousands of angry people marched through the streets protesting the reactionary ruling by the Supreme Court.

Over 3,000 demonstrators flooded the Federal Building Plaza in Seattle to shout opposition to the abortion-ban decision. They moved into the streets to block them off, some sitting to risk arrest. Another pro-choice demonstration of at least 500 people from Westlake Center marched in and joined the crowd at the plaza. The rally was fueled by anger against women’s enforced second-class citizenship. Many speakers represented the labor movement, both the rank and file and leadership. Several speakers attacked capitalism and called for socialism. A woman demonstrator stated defiantly, “We won’t obey the court.”